Will the Fed finally enter rehab at its 15-16 December FOMC meeting? 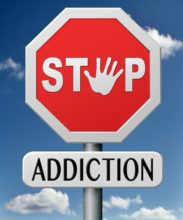 Is the Fed that junkie that keeps on promising to kick the habit because they know the dire consequences if they don’t, but just want that last fix because it feels so good and they’re frightened of cold turkey? How many times has the Fed now signalled it will come off the QE juice but then found ‘events’ to talk itself out of it? So here we are again in the run up to yet another FOMC meeting (16 Dec) with a rate rise and return to more conventional monetary policy being promised. On a near term basis, another delay or only a symbolic tightening might seem a tempting option. October’s trade deficit continues to highlight the pain being caused to manufacturing competitiveness for domestic industry and with even the IMF highlighting the mountain of appreciating US dollar debt (at $18 trillion) overhanging emerging market corporates, any rate rise that further increased the already high US dollar could trip an avalanche of defaults, let alone snuff out the sub-prime consumer binge in the US.

This time however it seems a bit different. After crying wolf again at end October, a further deferral could cause a significant loss of confidence that the Fed is in control of events. And as with any Ponzi scheme, once credibility goes, then the edifice can come down very quickly. As per our previous blog using the John Tuld analogy, once you’ve eliminated the options of being smarter or cheating (or they no longer work) you may as well be first out of the door and throw everyone else under the bus. This time, Draghi’s decision not to bring out a bigger QE bazooka from the ECB may have incurred the wrath of wrong-footed markets and pumped up the Euro against the US dollar, but this has also made it much easier for the Fed now to start hardening US rates. In the world of co-ordinated central banks, there are few coincidences. The macro data meanwhile is also not providing the Fed with much cover to defer a rate increase this time. The November non-farm payrolls provided another data point of steady net job formation and modest income growth along with an upward revision to prior month numbers (more below) while the rumours that Saudi was planning to announce a change in production strategy at last week’s OPEC meeting, and thereby push up oil prices, was shown to be spurious with Saudi production plans unchanged. Had the dollar soared with an expansion of ECB QE & NIRP or US consumers faced higher fuel prices, then the Fed may have used these to avoid a rate rise, but not now. As for the deterioration in the US trade balance (to -$43.9bn in Oct; -$1.4bn MoM and -$3.9bn YoY), the US has been living with this for some time now and as long as cash continues to flood into US dollars, is something that can be put on the back burner for now. 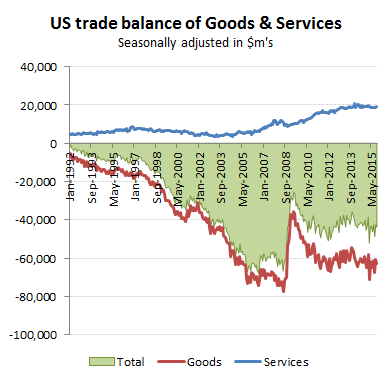 US non-farm payrolls for November.

A bit of a non-event, but that was precisely what was needed to remove it as a defining issue at the forthcoming FOMC. At +197k private sector net adds representing a YoY increase of approx. +2%, this is broadly in line with the growth in the working population. With average weekly earnings also up by approx. +2% this means total private sector income growth is running at just over +4% pa.  This is slightly ahead of overall GDP growth at nearer +3%, albeit the relatively modest component of private sector income to GDP of around 41% means that this increase (of +221bn annualised) is providing a contribution to overall US GDP growth of only +1.7ppts. To Yellen, this probably is not a game changer but provides a reminder or the extent to which US growth remains dependent on credit growth given the dollar impacted corporate earnings sector and the need to err towards more of a token increase in rates at this juncture. 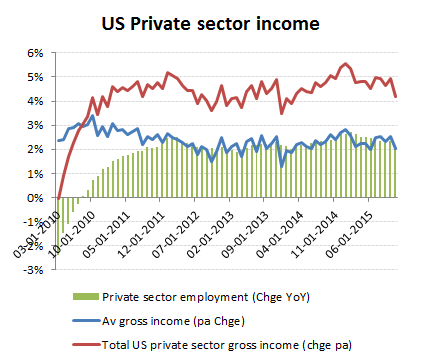 Takeaways from a sector analysis of November’s job report include the expected further erosion in mining and oil related areas although a somewhat surprisingly resilient performance for the ‘Goods producing Industries’ segment (+34k MoM & +2.1% annualised) given the deterioration in October’s Goods producing trade balance. We don’t have the data behind this at time of writing, although we suspect that this reflected the continued strength in auto sales which along with the construction industry are prospering from the re-discovery of sub-prime loan funding.  Yet another reason for Yellen to exercise extreme caution. 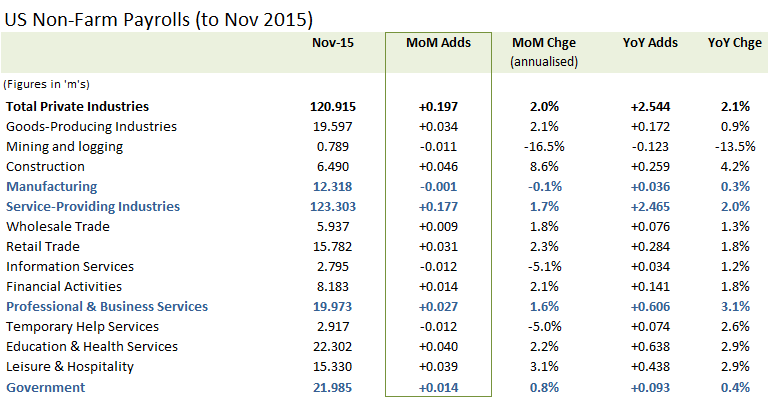 Markets find it tough to break the BTFD conditioning