Yahoo – last one to leave please turn off the lights!

So having failed to rejuvenate the core and divert attention to crystallising value from selling down the peripheral assets, Marissa Mayer and the Yahoo board are now left with the one last option, sell the rump. But with under $5bn of sales and barely profitable, what might it be worth and does the proposed spinoff of the remaining 15% of Alibaba into a new investment company, Aabaco offer a valuation upside for the shares?

The simple answer is probably not. The implied value of the rump after stripping out the current market value of both Yahoo Japan and Alibaba after including possible gains tax liabilities of around -$9.9bn ($2.1bn for Yahoo Japan and $7.8bn for Alibaba) is approx. $4.7bn. For a major internet property with search, mobile, video and even some social media (Mavens), a sub 1x revenues does not seem too demanding, albeit only if a new owner of partner would be confident in restoring underlying growth back to nearer +3-5% pa again as well as margins back up to nearer 20%.

Yahoo’s tax advisor claims the Alibaba disposal can be sheltered

With so much of the potential value tied up in its two big listed investments, Yahoo has for some time now looked more like an investment trust rather than a normal trading operation. By that I mean that the market values for the investments are taken as given, with the key investment thesis determined by the extent to which a discount to reflect tax liabilities and inefficiency in cash distribution ought to be recognised. For Yahoo, the decision to first unload its peripheral investments and now possibly much or all of the remainder probably justifies limiting the discount to just the potential disposal tax liabilities. The contention from Yahoo’s tax adviser (Skadden) however is that that the proposed spin-off of the Alibaba stake into a new investment company, Aabaco, will qualify for “tax-free” treatment and therefore is encouraging some investors to add this $8 per share back into the pot; something that would leave the rump operations with a negative implied valuation of around -$3.4bn. Whether this refers to Yahoo’s immediate liability or also that of its shareholders is not so clear and particularly now that the IRS has declined Yahoo’s request to rule on this. While it could have issued an adverse Private letter ruling (PLR), it has kept markets guessing by stating that it was “concerned” that these types of deals could become “less justifiable”.

Without a favourable tax adjudication we estimate that the current share price is pretty much slap bang in the middle of a possible valuation range that a potential trade buyer might fork out for the rump. For this we have applied a normalised EBITA margin range of 10-20% and an operating FCF yield range of 5-7% to reflect a recovery in growth to a range of +3-5% pa. For those that are into things such a valuation volatility, an interesting feature of this is the relatively modest impact to the overall Yahoo valuation this generates; in large part a function of the dominant scale of Yahoo Japan and Alibaba investments. A case of the tail wagging the dog.  The implications of this of course is that while the possible decision by the Yahoo board to go ‘full retard’ and sell everything will generate plenty of column inches and broker notes, its relevance on the overall valuation remains dwarfed by the issue of the Alibaba tax liability, which remains unresolved. 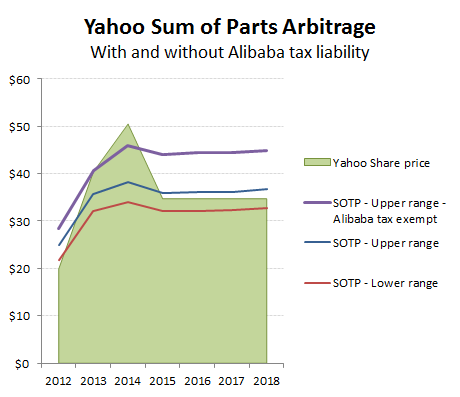 There a two ways one might look at something like Yahoo. Treat it as an operating entity and try and value the business and its various components as such from their prospective operating FCF and growth potential.  The other way however is much simpler. Assume the market is right in the valuations it places on the separately quoted entities and then treat it like an investment trust and arbitrage the various bits.  With the group already embarked on divesting its remaining investments in Alibaba and Yahoo Japan and distributing the proceeds back to Yahoo shareholders, the normal discount on investment trust assets to reflect the normal cash flow inefficiency for shareholders does not apply and so to, this aspect of the normal investment trust NAV discount. Tax liabilities however remain and regardless of whether Yahoo shunts them off its own books and onto its shareholders by establishing an accrued capital gain on transfer and this ought to still be recognised, particularly given the refusal by the IRS to Yahoo’s request for an advance ruling on its intended treatment.

Excluding the potential disposal gains tax liability on the remaining 15% stake in Alibaba therefore is probably pushing the valuation assumptions too far at this stage and also doesn’t seem to be where the markets are at, with the core possibly being included at a negative valuation if one excluded the approx. $8 ps of potential Alibaba tax liabilities.

For those of you into the arbitrage entrails I’ve included some the workings below. 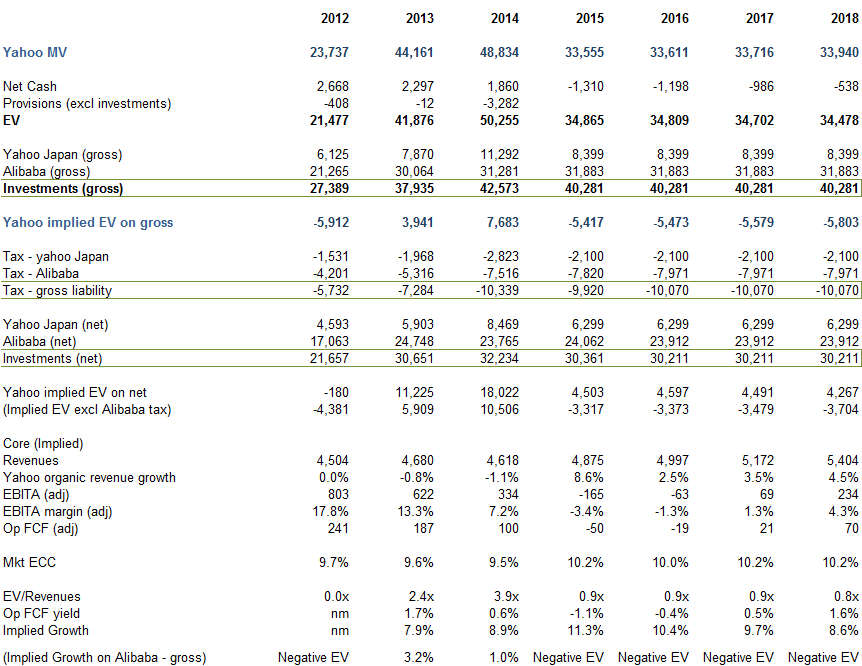 Splitting out Alibaba and Yahoo Japan, with and without tax liability

Yahoo drops its plan to spin-off its Alibaba stake – Oops!

Yahoo unveils ‘SpinCo’. Well it can’t be plainer than that surely?

IPO: Market valuing Alibaba as if it were a normal US tech Co!