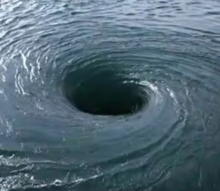 The world seems to be in love with JD.COM. After the concerns about the possible headwinds from a slowing Chinese economy that had been dragging down sentiment and shares in rival Alibaba, JD.COM’s results assuaged many of these fears. As well as reporting aÂ +52% YoY increase in Q3 revenues and +72% rise in gross profit (with gross margins up from 12.2% to 13.8%), the group also provided a Q4 revenue growth guidance in a +47-51% range. While these Q3 gains were offset by a similar rate of growth in OpEx (+71% in Q3) to leave headline EBITA down by -RMB260m, from -RMB41m to -RMB301m. markets are clearly excited with the sustained growth and a future capacity to translate this into operating margins and cash flow.

The group however has not yet provided markets with a path to profitability. Gross margins are improving, but are less than half of Amazon’s which also has the benefits of having over three times the revenue base of JD.COM. JD.COM has been investing heavily in areas such as fulfillment (+63% in Q3), marketing (+89% in Q3) and technology (+73% in Q3), but has not revealed the extent these represent a one-off infrastructure investment or are in fact largely variable cost increases as might be interpreted by the group’s plans to increase staff numbers by a further +40% to 150k by the end of next year. Already with the lowest gross profit per employee amongst its key competitors and under $40k pa (<$9k in Q3), the group needs to demonstrate a scale advantage in either leveraging marginal revenue growth ahead of its variable costs, which it has yet to do, or to considerably enhance gross margins, on which it has made only tentative improvements. Â High rates of organic revenue growth will encourage markets to reach out to future earnings and cash flow horizons, but these need to be supported by a convincing model that can be leveraged to get there. So far, JD.COM has been delivering the first component by sacrificing current margins for growth, but with those gross margins possibly running at less than their accompanying variable costs, the group still needs to square the circle. In its Q4 & final results for FY15, due in February 2016, the group is to provide its initial guidance for 2016 and markets will be looking for more than just profitless growth by then. 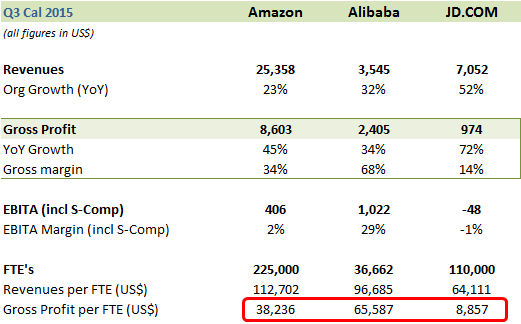 How scalable is JD.COM’s model on a sub 14% gross margin?

Yahoo drops its plan to spin-off its Alibaba stake – Oops!

Yahoo – last one to leave please turn off the lights!

Yahoo unveils ‘SpinCo’. Well it can’t be plainer than that surely?

IPO: Market valuing Alibaba as if it were a normal US tech Co!