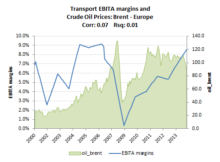 With fuel costs representing 45-50% of an airlineâ€™s operating costs and 35% of its revenues, it would seem self-evident that a significant movement in oil, and therefore fuel prices, would have an equally dramatic effect on margins; in particular when the industryâ€™s margins are often the wrong side of 5%. The oil price however is a tide that raises or lowers all boats equally, albeit the same rate of price change will have a much more pronounced percentage impact on the less competitive and therefore lower margin players. As such, this might suggest a strategy of â€œbuy the dogsâ€ in the current falling oil price environment, although this would be a mistake. The problem is that margins are determined by the relative operating efficiency of the carriers and that ultimately any change in fuel as a cost component will be competed away. This is why there is such a poor correlation between the transport industryâ€™s historic operating margin performance and its principal cost item, fuel (see below chart). Chasing the low margin airline stocks on the basis of a quick margin boost from low oil prices therefore is the wrong play. Instead, use the oil fueled rally to dump the dogs. 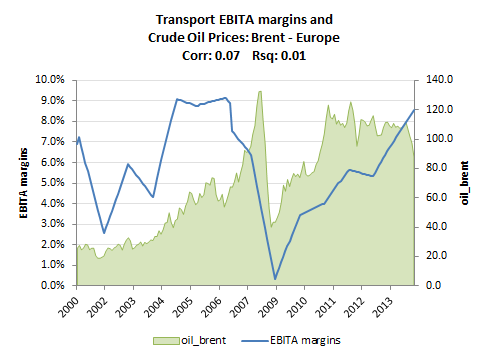 If you need to see what really drives airline margins, look no further than the macro environment. US private sector employment provides an accurate proxy for US corporate investment and US economic cycles and also for airline margins, as can be seen in the below chart. Oil prices provide a useful broker story for the muppets, but it is the bigger picture of the broader economy that really drives the industry. In this context however, the oil price movement cuts both ways. Is the recent collapse in oil prices a lead indicator of slowing demand and therefore a precursor for a negative headwind which will impact cyclicals such as airlines or something else? Certainly the involvement of Saudi Arabia in pulling the rug from under the oil price after meeting with Romney suggests an element of â€œget Putinâ€ behind this, although this would not have been possible if the underlying growth out of the BRICs had not been softening and Europe not been sinking back into recession. 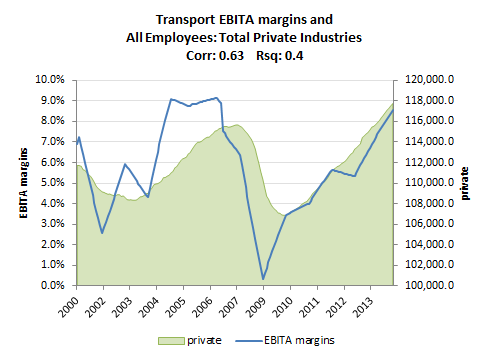 Transport industry driven by the top line not the cost line