Before we all get bogged down in the Q2 results season which is beginning to gather pace I think it is good to remind ourselves of one part of the financial burden that is to crush us if interest rates rise to more normalised levels – that is the scale of Govt, household and non-financial debt facing us all. The maths is fairly simple. For an economy with gross debt equal to GDP (ie 100%), every 100bps rise in interest is an immediate drag to growth of 100bps. In reality the impact is considerably greater given the multiplier effect.Â  Rates as we can see below are already rising from their QE manipulated troughs. Bernanke may squeal that it was all a great misunderstanding, but the cat is out of the bag. Big bond fund managers are trying to goad you into these current yields as a buying opportunity, but without Fed support a return to 4-5% is not impossible. 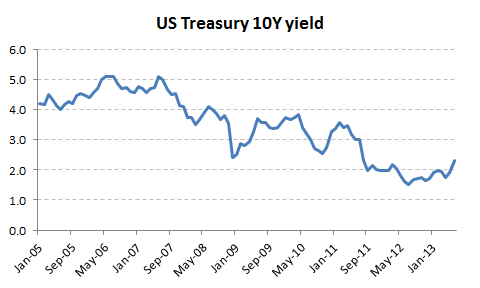 A potential +200bps rise, even if over a 2-3 year time frame on many of the Western economies with total non-financial debt running at 250-300% of GDP ‘ain’t goin to be pretty’. Do the maths. The direct impact alone will be around -1% pa from average GDP growth. Competitive devaluations aside, the recent upgrading of UK GDP expectations by one big bank (from +09% to +1.1%) must take the biscuit as one of the pointless revisions. Yes we are all sensitive to directional changes, but what’s the margin of error on these forecasts? I would judge at least +/-50bps. If this is just a big suck up to new wunderkind at the BoE, Mark Carney, to endorse his new open policy of ‘guidance’ (aka “Spin”), then this is about as worthless as taking seriously the shifting prognostications of his counterpart in NY.Â  Better to look to who appointed Carney, (Osborne) and what his agenda is. Approaching what could be this Govt’s last General Election and with support shredded by UKIP, the Chancellor is now desperately resorting to Bush senior’s epitaph “read my lips, no new taxes” with his own version of “no tax increases to eradicate the deficit”.Â  Bollocks!Â Â  On the Govts previous projections which included a miraculous recovery in GDP they were still running a sizable deficit by the end of this Parliament and if rates rise the rate of deficit reduction is going to be even less than this forecast. So if Osborne isn’t going to raise taxes (well he might, but just claim these are for improving hedgerow and rural wildlife) and the economy can’t be trusted to deliver, then he will have to sell more debt. His quandary however, is that if he tries this while the Fed is ‘tightening’ (or being less easy), then rates will have to rise and he can kiss goodbye to ever getting re-elected. His good buddy Mark Carney whom he personally selected is going to do what? Sit there in sympathy while have Milliband around for tea or do a Bernanke. ‘Print baby print’ and then head home to Canada before the shit hits the fan? You work it out. 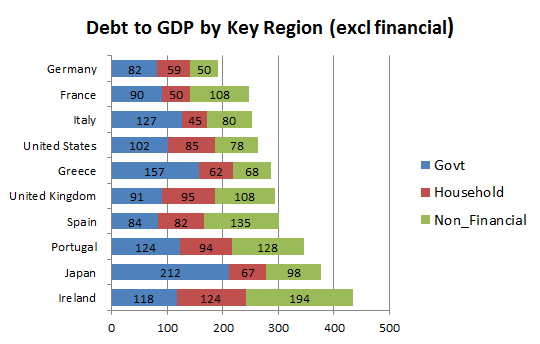