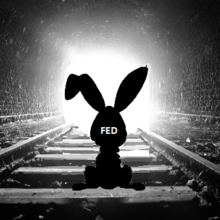 Economics is proving to be a little like a tube of toothpaste. Squeeze it one place and the toothpaste is just displaced elsewhere. When the Fed adopted what was already a failing Japanese experiment in QE in 2008/09, it provided a much needed liquidity fix for the credit crisis, but a dangerous temptation that with the backing of the dollar’s reserve currency status it could somehow invert the normal business cycle, where excess risk is punished and diligence is rewarded. Unfortunately the business cycle borne from mal-investment doesn’t end just because central bankers have been in charge. After the biblical 7 years, we seem to back to square one, albeit with even more debt and a depleted monetary arsenal, with the BoJ and ECB already going ‘full retard’ with NIRP. Bill Gross in his latest investment outlook succinctly expressed the rhetorical challenge to the Fed with “How’s it workin’ for ya?” https://www.janus.com/bill-gross-investment-outlook.

So in March, will the Fed follow Mark Carney at the BoE and walk back in its tightening policy? The evidence of a slowing economy is not hard to see; from the +0.7% Q4 US GDP initial growth estimate, to anecdotal evidence from falling freight volumes and slowing exports. Employment data (see below) however, suggests the low export component to the US economy means that it has weathered the dollar appreciation and first 25bps rate increase relatively well. Short term, asset bubbles would welcome a rate deferral, although as we are increasingly seeing from Japan and China, these policy returns are diminishing. For the Fed, a series of modest rate increases would have limited impact outside the already distressed energy sector and could also be insulated from some of the more politically sensitive areas such as student loans. It would also leave it with some monetary ammunition and currency to weather a potential end 2016 global recession that much better. As the fictional character of John Tuld would say in Margin call “It sure is a hell of a lot easier just being first”.

If there is a global slowdown/recession looming for end 2016, when do you think you’ll hear about it? When companies downgrade guidance and analysts and consensus forecasts follow on behind and when do you think that will be, 2018? http://growthrater.com/economists-predict-2018-for-the-next-recession-lol/ . On previous experience such as in 2008, the harsh lesson is that you will be too late. Although market valuations had been anticipating a contraction ever since 2007 and employment data started to clearly reveal that industry was cutting investment by Feb 2008, it was not until October of 2008 that consensus EPS estimates started to be cut. Up until then, the consensus estimate for the FT Allshare was for average EPS growth of around 8% for FY08 followed by +5% for FY09! I’m sure you can work out why this is the case, but what it means is that the vast majority of sellside research and accompanying valuations will be based on a probably flawed series of not just company estimates, but also an unreliable market cost of equity, which will be the aggregation of all of these. This however is not the case with the GrowthRater forecasts which are based on a consistent and coherent set of macro assumptions for broader economic growth. With Japan risking a currency meltdown, Europe riven with political disunity and possible Brexit and China struggling to transition to a consumer and service driven model and all sitting on a mountain of debt, we do not think we’ll have to wait until 2018 for the denouement. Our forecasts anticipate an emerging global contraction by the end of this year, albeit mainly impacting  forecasts for 2017, in particular outside the more insulated US.

US non-farm payrolls for January 2016

If you were looking for these to provide an excuse for Yellen to do a Carney (ie bottle out of a pre-announced policy tightening), then you’ll have been disappointed. Notwithstanding the usual caveats about the reliability of the turn of the year data with its heavy seasonal adjustments, January’s net private sector additions of +158k MoM were up +1.6% annualised, and accompanied by a steady +2.5% YoY rise in average wages. Coming off an exceptionally strong prior month (December’s MoM increase was +251k) which was assisted by a seasonally very mild weather while January’s reverted back to the norm, this was a perfectly acceptable performance and not one that would suggest sending the patient back the emergency ward for monetary R&R.

A solid advance in January after a weather supported December 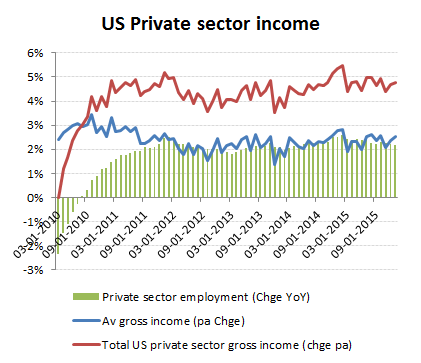 Takeaways from a sector analysis of January’s job report include the expected further erosion in mining and oil related areas although another surprisingly resilient performance for the ‘Goods producing Industries’ segment (+40k MoM & +2.4% annualised) and manufacturing (+29k MoM & +2.8% annualised) which were both ahead of December despite the dollar appreciation and thereby weakened domestic manufacturing competitiveness. For construction, the late arrival of winter which had so assisted the December numbers (+45k/+8.6% annualised) returned with vigour for January, although the segment still managed to post a MoM advance of +18k/+3.3%. Apart from mining and logging, the only other segment in reverse for January was for Temporary help which declined by -29k/-10% annualised.

January 2016 US non-farm payrolls by category

All but 2 sectors up