Hurrah for the recovery in US employment!Â  Juneâ€™s +202k increase in private sector jobs was ahead of â€˜expectationsâ€™ and have been spun as a further confirmation of the self-sustaining recovery in the US economy and the planned â€˜taperingâ€™ of the Fedâ€™s current $85bn per month of QE life support. Â As a consequence the US dollar has been rallying and perhaps perversely even US stock prices notwithstanding the creeping up of long bond yields and probably with more to come. 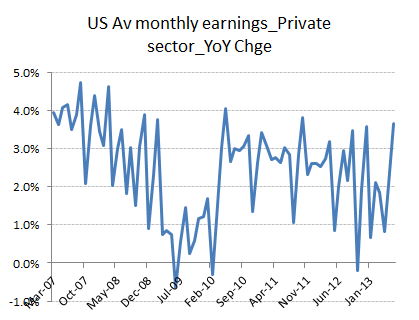 Juneâ€™s jobs data may have been an improvement, but the underlying Â picture remains bleak. Year on Year, the increase in private sector jobs was a mere +1.8%; little more than the overall increase in working age population.Â  True, average weekly wages are up around +3.2%, which indicates gross wages from the private sector are up around +4.6% YoY and +$215bn annualised. Strip out the +$120bn YoY increase in annualised Federal personal tax receipts however and the post tax increase in personal income was only around $96bn or +2.7% YoY. Hardly the stuff of a booming economy when ones trading partners are grinding to a halt and a rising dollar is eroding competitiveness! Â Add in the supposed stimulus of Bernankeâ€™s $85bn per month QE programme and the rising in private sector income is little better than horrendous.

The mix of new job creation meanwhile also provides cause for caution. If industry believed in the sustainability of the recovery, then one would expect a shift towards full time job creation. This is not happening and Juneâ€™s buoyancy in private job formation was entirely as a consequence of part time job group as full time private sector jobs fell by -240k in June.Â  Again, this is hardly the stuff of an imminently surging economy.Â  A moribund global economy and a strengthening dollar suggests against an export led recovery. A consumer led recovery however will need rising disposable income or a run down in savings. The dearth of full time â€˜qualityâ€™ jobs and rising interest/mortgage costs must now make this increasingly unlikely. 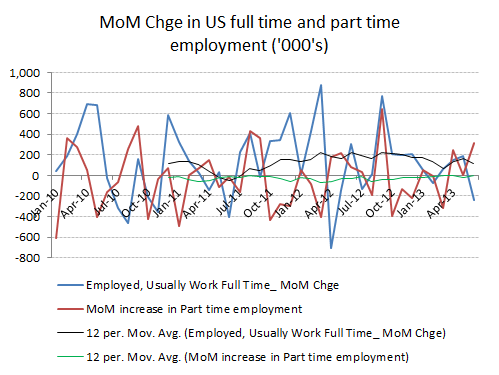 So where does this leave the US.Â  The Government, like virtually all others, has eschewed tackling its structural deficit. Its central bank has swallowed around $1tn pa of this through a QE programme that has bought time for the Government but with little tangible to show in terms of real and sustainable economic growth. If growth stalls, as is likely, then the deficit hole just gets bigger as the politicians have shown little appetite for taking hard choices. If the new Fed chairman is not there to buy back the bonds that will have to be issued, then rates will rise, and possibly rapidly, which will crush the consumer and all those piling back into cheap financed properties.

The Government (collectively) is not prepared to live within its means and as always will take the line of least resistance (yes this is what got the Greeks in trouble, but who cares).Â  Obama cannot afford to allow interest rates to rise, but wonâ€™t cut expenditure.Â  He needs cash for â€˜his stashâ€™ to reward voters and protect his legacy and will therefore appoint a replacement to Bernanke who will keep the printing presses rolling. Â My tip for the job will be his trusty ex Treasury Secretary, Tim Geithner.