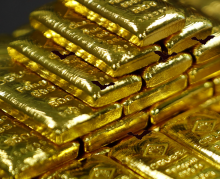 In December 2009 as the gold price was inexorably rising in the face of central bank currency debasement, called QE, we started to get scare stories about fake gold. A decade later and the Fed is back to its old tricks again and investors are rushing into the yellow stuff to preserve capital and once again we have a juicy story about fake gold to discourage to gold bugs and keep investors in the fiat currency reservation. Notice a pattern here?

Back in 2009, at least the narrative was more convincing, with tungsten being the base metal under the gold plate. Tungsten of course being almost as heavy (at approx 99..6% the density of gold). Today however, the fake Chinese gold is reported to be gilded copper, with a number of these found amongst the supposed 83 tons of its ‘gold’ deposited as collateral by NASDAQ quoted Wuhan Kingold Jewelry Inc for $2.8bn of loans.

Confusing plated tungsten with real gold bars I can understand, but gilded copper seems ridiculous as these bars would be less than half the weight of the real gold ones. Come on guys, you can do better than this and looking at the further rise in gold prices to above $1,800/Oz, markets don’t seem to any more spooked by this story than they were back in December 2009. The Wuhan connection though was a nice touch!