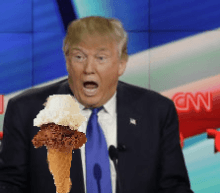 Forget Trump sacking FBI chief Comey or the occasional missile strike on another’s sovereign territory, the mainstream media has now got their teeth into something really big. Don’t tell the kids, but he gets two scoops of ice cream, while the journalists only got one!

The Don seems to have attracted a new and more sinister moniker from Buzzfeed of Donny-Two-Scoops.

The fat boy in the east must be quaking in his slippers now.