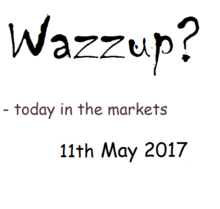 With the group predicting another year of flat-lining trading and discarding the commitment to raise the dividend by >=+10% pa, markets seem to be finally getting the message that a sub-market GrowthRating is warranted. The issue however, is how low will the market pitch this, as along with other European Telcos, they are in uncharted waters. Their ability to leverage an advantage from their legacy infrastructure is being restricted by regulators, while attempts to build out media platforms brings them head to head with established distribution brands and groups with proven content origination skills. If the growth story is relying on flexing the balance sheet to acquire loss-leading live sports rights, then we may be looking at low single digit returns and growth prospects, at best. Markets though may be reluctant to completely relinquish hopes that the consumer strategy may yet deliver, particularly as past sunk content investment is parleyed into additional top-line growth from subscriptions and APRU, providing the veneer of growth until the next round of rights auction bloodletting. As a result I am sticking with my target GrowthRating range for the stock of +3% CAGR (+/-50bps), which is only approx -50bps below their 5-10 year average. Also, after the recent drubbing, the stock price and possible yield will offer a relatively stable bolt-hole for UK funds ahead and over what may prove to be traumatic Brexit negotiations, or indeed perhaps the lack of them! 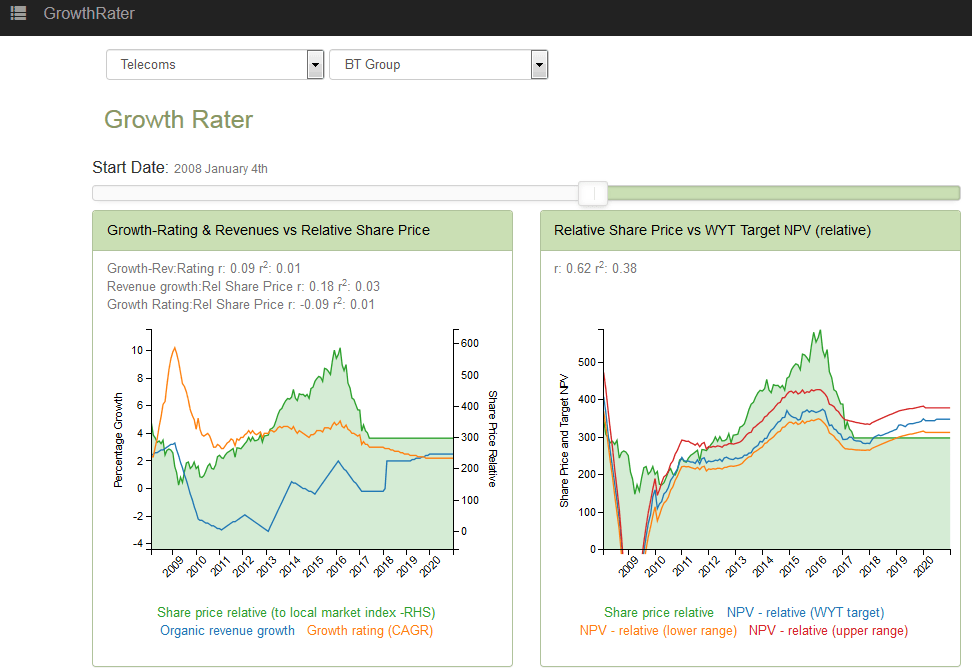 Out popped the Q1 earnings release after market close, but then closely followed by one confirming what had long been rumoured, but those hoping that continental corporate governance had improved, wouldn’t happen; that being Vivendi offering to buy the 60% of Ad agency Havas from the Chairman of its own supervisory board, Vincent Bollore. With under 21% of Vivendi equity, but almost 30% of voting rights, Vincent Bollore has been able to convince his fellow supervisory board members (including his son, Yannick) of the merits to Vivendi of spending €2.3-3.9bn on between 60-100% of Havas, depending on the acceptances of the subsequent offer to minority shareholders.

While it is easy to see the advantage to family Bollore of being able to more than halve their current debt load (of €4.2bn for Bollore Groupe), the benefits to Vivendi are less obvious. Unfortunately we’ve been here before with Vivendi, with its often spurious justifications for vertical integration under 6M, and something I’d hoped they had learned and moved on from.  If the plan is to coerce Canal+ advertisers into using Havas, this  makes no more sense than pushing UMG (and now perhaps even Telecom Italia) to use Havas or Canal+. If it isn’t justified on a stand alone basis, then what you’re doing is just transferring value from one side of your business to another and usually not to the advantage of your client. Similarly, will the ownership of Havas by a large conglomorate that is seeking to “enable Havas to leverage Vivendi’s skills in talent management, content creation and distribution. In return, Vivendi will gain access to Havas’s expertise in consumer science, data analytics and new creative formats.” not challenge Havas’s independence; a crucial requirement for all agencies?  As a cash offer, the Vivendi board does not need to revert to the other 79% of equity risk capital owners for approval, so once again in the sector, cascading shareholdings are enabling a small tail to wag a big dog.  The majority of the risk capital therefore is being treated as little more than a minority, but given the lack of push-back is perhaps all they deserve. As for the stock price, don’t expect it to lose that conglomerate discount!

For a consumer discretionary business the first quarter of the calendar year tends to be a thin and often lumpy one, where trends can be exaggerated or simply distorted. For Vivendi, this included the increased impact on Universal Music Group (UMG) of the continued surge in streaming revenues (including the transitional boost to Q1 from Q4), but a dire performance from Canal+,  where a second half pick-up is still predicted by management, but where Q1 profits collapse by 70% on a 3.5% decline in sales. Including the newly consolidated associate Telecom Italia however, the -30% decline in adjusted EBITA (-34% organic) was partially reversed to a decline of only -4% at the PBT level. From here, a -29ppts reduction in adjusted tax rate from over 40% to only 11%, jumped this up to a +57% YoY increase in ‘adjusted’ net income.

So guess which metric Vivendi decided to lead on? 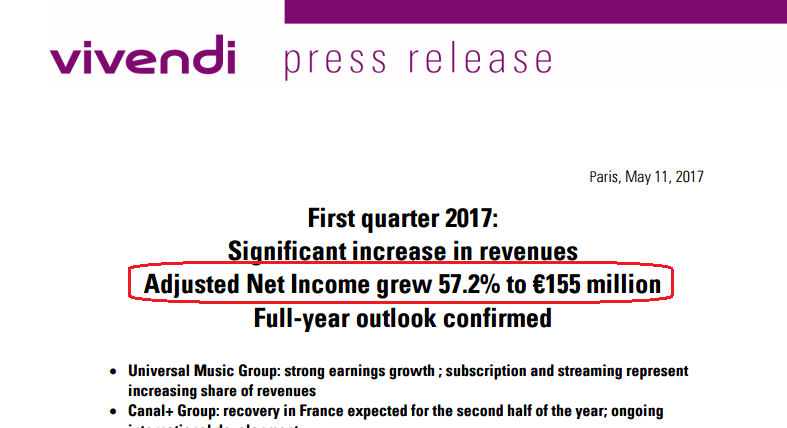 Q1 results were driven by UMG, associate consolidation and tax 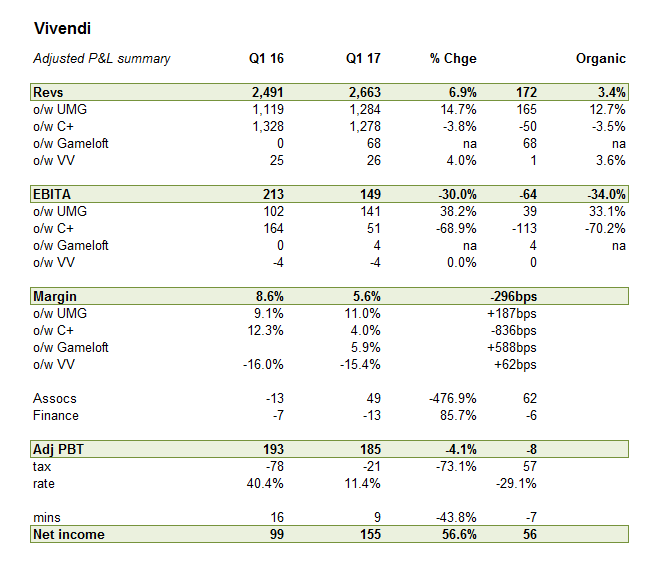 Markets responded positively to the Q1 numbers, which delivered what initially seemed like a strong rebound in ‘organic’ sales od +12%. The group lumps in fx in its version of ‘organic’, so the real number was probably nearer +10% if the acquisition contribution was also backed out. Still, at first sight it seemed like a good number and the share price responded accordingly.

From here, things get more obscure (and worse). The management statement refers to more trading days in the Q1, and a benefit from a late Easter (neither quantified as to the estimated impact). Although not quantified in the actual release, I understand that NIBE’s Q1 included 64 trading days vs 61 the previous year. Adding +4.9% more days to the quarter meanwhile may be just the start. The phasing of Easter into April and an unseasonally warm Q1 in the US saw a spike in housing completions (+13.4% YoY in March, with single family completions at +7.9% – see link), before they downed tools for the holidays. There is also the issue of the drop in gross margins of -130bps which may be solely a result of the new acquisitions or maybe the inclusion of some pass-thru revenues that are not representative of the real growth in value added. On a normalised basis therefore the underlying trend in organic revenue growth could be nearer +5% if only to adjust for the extra days. Add in the distortion of housing completions spiking ahead of the Easter holidays and the real trend could be quite a lot lower still.

Dropping down thru the income statement and things get less encouraging with gross margins contracting sharply and EPS actually coming in below my forecast.

Valuation: As usual, investors conflate EPS growth with value accretion and should check out the diminishing CROIC, which for a growth model based on an aggressive acquisition strategy, but delivering a LSD organic revenue growth trend is the killer metric. 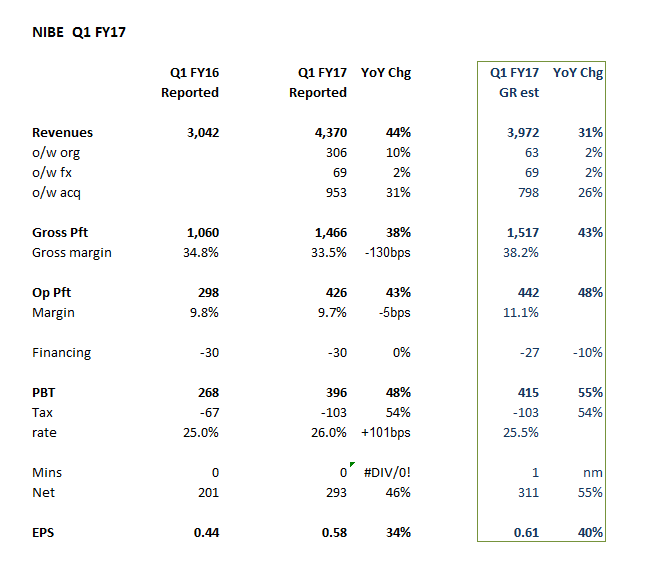 Pieces missing from this puzzle still

LatAm is past the worst and Telefonica’s O2 stake remains a possible speculative play on its planned divestment, but beyond that, there’s not a lot to get excited about with regards both Spanish and German operations. With organic sales growth of only +2.5% even after adding back in the estimated drag from regulatory price checks, a prospective OpFCF yield of 5.3% discounting growth of +4.0% pa suggests markets are already pricing in a fairly generous dose of hope value.

Last trading – Q1 FY17: Organic sales growth of +1.5% may be down on last year’s +3.4%, but with tight cost control (including FTE’s -7.3% YoY) EBITDA margin growth at +45bps was double that in the comparative period. Including a +3.7ppts fx tailwind as last year LatAm devaluations partially reverse and reported revenues increased by +5.0% with reported EPS growth of +57% reflecting the leverages through a falling net interest charge ( -32%) and tax rate (-7ppts). Organic sales growth included a +1.7% rise in service revenues (driven by mobile data) and a +2.1% rise in average ARPU, notwithstanding an estimated regulatory drag of approx -1.6ppts.

OUTLOOK for FY17 – no change to guidance: The group is guiding for “stable” organic revenues after a -1.2ppts regulatory headwind, with OIBDA margins rising by up to +100bps. Excluding spectrum investment, CapEx is expected to edge slightly lower to approx 16% of revenues. 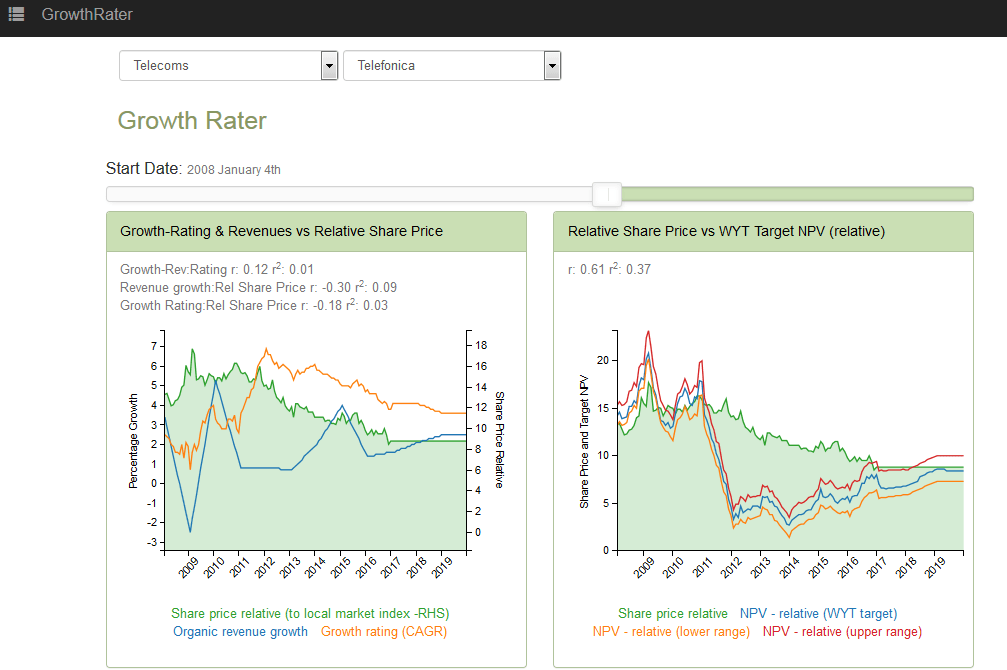