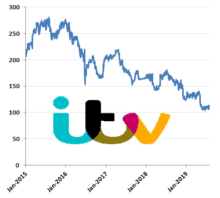 When in doubt, it seems we all try and cling on to our normalcy bias. While ITV (itv_l) might seem an odd example of markets use of a ‘mean reversion’ to provide a valuation anchor point, this very much depends on the metric used and the perspective sought. Use a fixed metric such as a PE ratio, or even relative, and the new record lows being achieved don’t seem much like any sort of ‘mean reversion’, indeed far from it. Express the valuation as a growth rate (our GrowthRating) however, and immediately one can see this reversion to the ‘mean’. The ‘mean’ in this case being the eroding trend in organic revenue growth.

In the below chart, which can be found in the GrowthRater Analytics section, is the ITV relative share price (vs the FT Allshare index), along with the implied GrowthRating in Orange and the Organic Revenue Growth plotted out in Blue. From this chart I would like to highlight 3 trends

An additional insight that one might draw from the sensitivity in share price and GrowthRating to shifting trends in organic revenue growth is that markets have little confidence in forecasts. When you don’t have a clue about whether streaming services will kill off your business model, or provide some offsetting additional distribution for you content origination activities, is it surprising that investors will clutch at any straw going? In the below chart I have used the 2 year rolling average organic sales growth to define the GrowthRating and therefore target price for ITV. I think the results a pretty self-evident!

So where to from here, you might ask? Well on this side of the subscriber paywall, you’ll have to figure this out for yourselves.

Apple – when a picture is worth a thousand words!