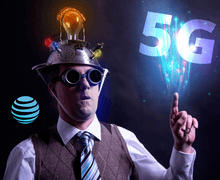 I’ll say this for new CEO, John Stankey, he’s got balls to spin off the $100bn Warner Media business his predecessor had bought only back in mid 2018. Presumably given John had managed the business briefly ahead of being elevated to COO and then to CEO, he either didn’t like what he saw, or saw that the challenge of building a streaming platform to rival Netflix, Disney, Comcast, Apple, Amazon and every other content wannabe, was a rabbit hole best to avoid. I guess the good news is that this CEO had the resolve to cut and run before being left with another Direct TV, or God forbid another AOL and has at least recouped the just over $100bn that AT&T forked out on Time Warner just under three years ago This will allow the group to now focus back on its historic core competencies of building out the pipes, rather than the sewage, in this case the ample black holes in extending the group’s fibre and 5G footprints. Recouping ones $100bn when the market has risen by almost 50% in the meantime and also cutting the supposedly “sacrosanct” dividend payout however, can only make me laugh at the chutzpa.

The deal: The division is effectively being reversed into Discovery Inc (DISCA) in return for 71% of the enlarged equity, which will be distributed to AT&T shareholders and $43bn of debt that will accompany Warner Media. With a diluted share base of approx 675m at DISCA, that suggests an approx 1.652bn new DISCA (or whatever they’ll be called) issued to AT&T, which at the current DISCA stock price of $31.9 ps suggests the equity component is worth (currently) around $52.7bn. Add in possibly $7bn of provisions and this prices Warner Media at approx $103bn, which is perhaps not coincidentally, is almost exactly the sum AT&T paid to TWC back in June 2018. In return, Discovery should get a proforma EBITDA of approx $12bn pa including the NPV of the planned $3bn pa of cost synergies, which assuming a FCF conversion of 80% (content origination is cash hungry to grow) and a 28% tax rate suggests an exit OpFCF yield for 2022 of 6.7%. Against our estimated market ECC of 8.9% for 2022, that implies a trend growth discount of +2.2% CAGR. Not particularly aggressive for a business that used to deliver and command growth around +3-5% pa, but then those were the sort of assumptions that got John Stankey’s predecessor in trouble. 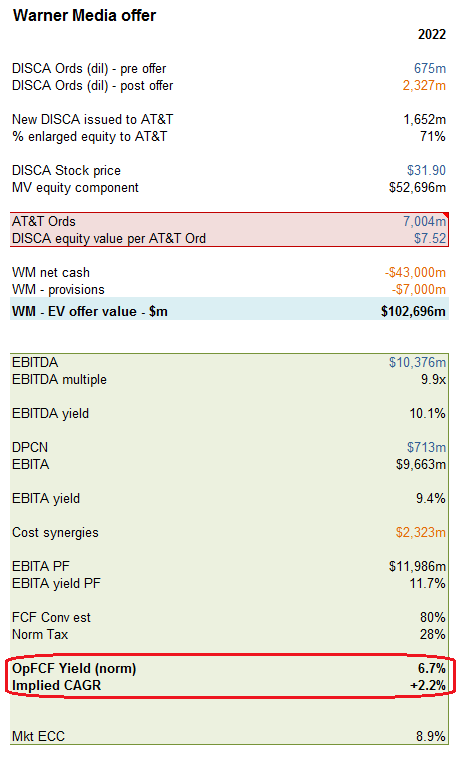 Who are the banks advising on these deal?