Do telcos have pricing power; is the sector at the cusp of an upswing as it comes out of a protracted investment cycle, or just a value trap? For those despairing at the billions already being chucked at 5G licences (€6.5bn last week in Italy) before they’ve extracted much of a return from 4G, one ought to be wary. EU regulations and bureaucrats are not virtues I would normally extol, but it this case they’ve done an excellent job. Don’t take my word for it, just check out the vibrant levels of investment coming in to support the new services, but the declining marginal returns. For consumers that’s great, but for those investors hoping for a return to super-normal returns and above market income growth that’s going to suck.

The problem is not that Telco’s have lots of new toys for consumers to play with, but that these enhancements just get competed away. When you have at least three competitors (at scale) in a market running similar commercial models, technology and service propositions, then you should expect pricing in a heavily fixed cost business to gravitate to the lowest marginal return for the lowest cost operator on the most efficient capital structure. While there have been plenty of attempts to consolidate markets, which often gain local regulatory support, this has so far been thwarted by EU regulators, whose resolve will no doubt be hardened by the Italian 5G bid; suggesting that this policy is not adversely affecting future service investment.

To expand on this theme I have included 4 charts of aggregated data on my European Telco coverage, which includes, BT, Deutssche Telekom, Orange, Telecom Italia, Telefonica and Vodafone. With these, I hope to provide a clearer and more graphic representation of the changes afoot. This is no longer the traditional capital investment cycle which is followed by rising growth and ROIC, but a more fundamental compression in returns and growth for as long as EU regulators remain in control. 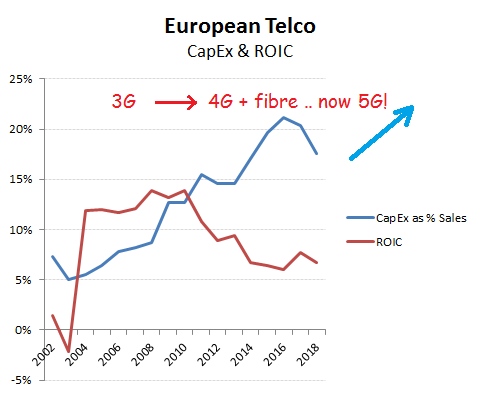 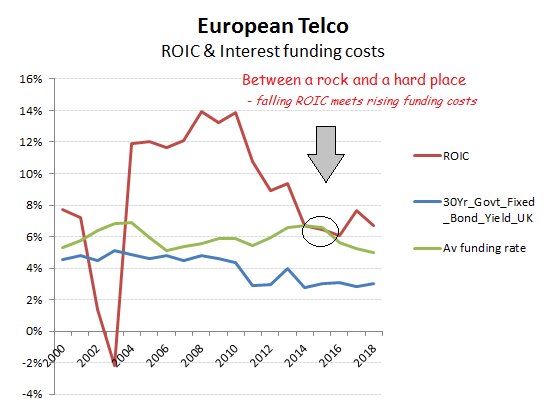 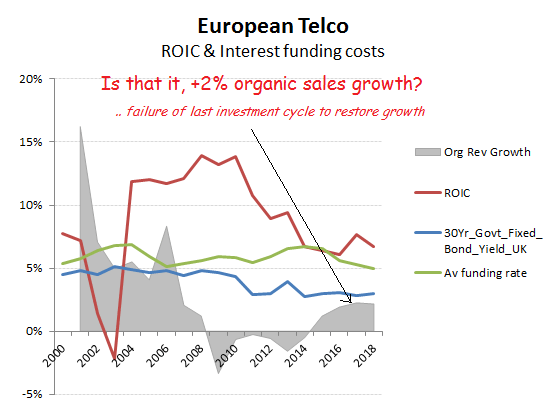 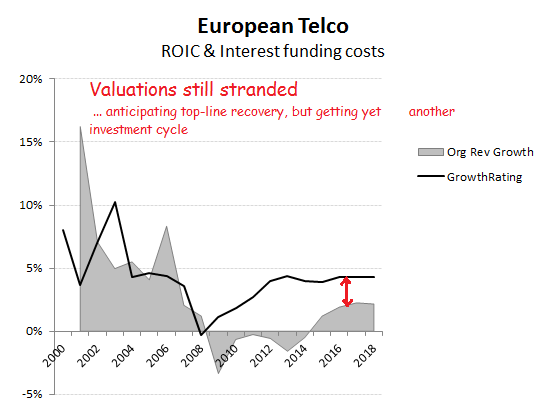