If I was a Comcast shareholder I would be concerned about the apparent enthusiasm with which the Sky board were recommending that their shareholders accept their managements revised offer for Sky.  Whoever was pulling the strings over at Sky (Murdoch, Disney?), they have played a blinder; extracting a 125% premium against the £7.69 closing price on 6 December 2016 and reflecting a 15.5x multiple of Sky’s trailing 12m adjusted EBITDA (to June 2018). Compared to the sub 12x EBITDA that AT&T ended up paying for the more content rich Time Warner, this seems a pricey foray into what is yesterdays TV distribution model. But then, when all you’ve got is a hammer, everything’s got to look like a nail   …  right? 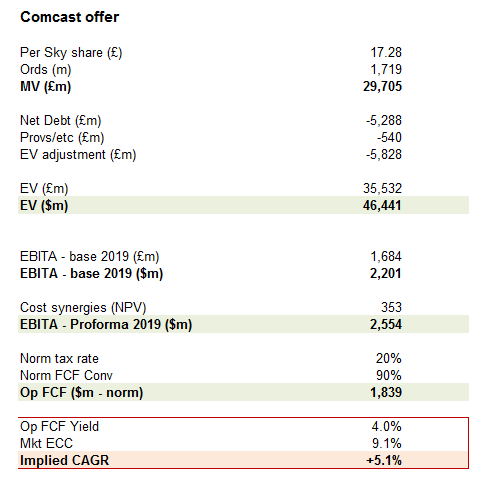 Giving Comcast the benefit of doubt on the base Sky business in 2019 and adding in the NPV of the $500m of run rate synergies into the mix and I get its acquisition to come in at around a 4.0% prospective Op FCF yield, which implies a GrowthRating of just over +5% CAGR. Against the recent run-rate in organic revenue growth as Sky pushes its customer proposition out into the continent and adjacent consumer offerings, this might not seem too unreasonable, while if tabloid press scare stories about potential price rises by Comcast are correct, this could well be set to be sustained into the near future. The big issue however, remains whether the whole business model of content bundling and a subscription pull-thru a proprietary distribution platform can be sustained when you no longer control the distribution bottlenecks and as regulators become more efficient in unpicking your ability to abuse your scale advantage in mopping up the main third party content rights. Increasingly as broadband distribution alternatives become available, we are seeing regulators limiting the acquisition of exclusive content rights and thereby denying these hitherto monopolist distributors the ability to leverage and sustain their super-normal returns.  The equity story with groups such as Comcast and Sky has become as much about effective regulation and the increasing commoditisation of distribution as it is about technology or brands. In the US, the scrapping of Net Neutrality by the FCC might provide cable behemoths such as Comcast with a late lease of life by squeezing a better distribution take from the value chain, but this may not be the case in Europe, particularly post Brexit. Will the EU feel particularly generous to an American owner on a non-EU UK operation in how it is allowed to operate across the EU? Indeed, will even UK politicians be particularly interested in defending Sky’s domestic market position without the incentive of News Internationals political influence? 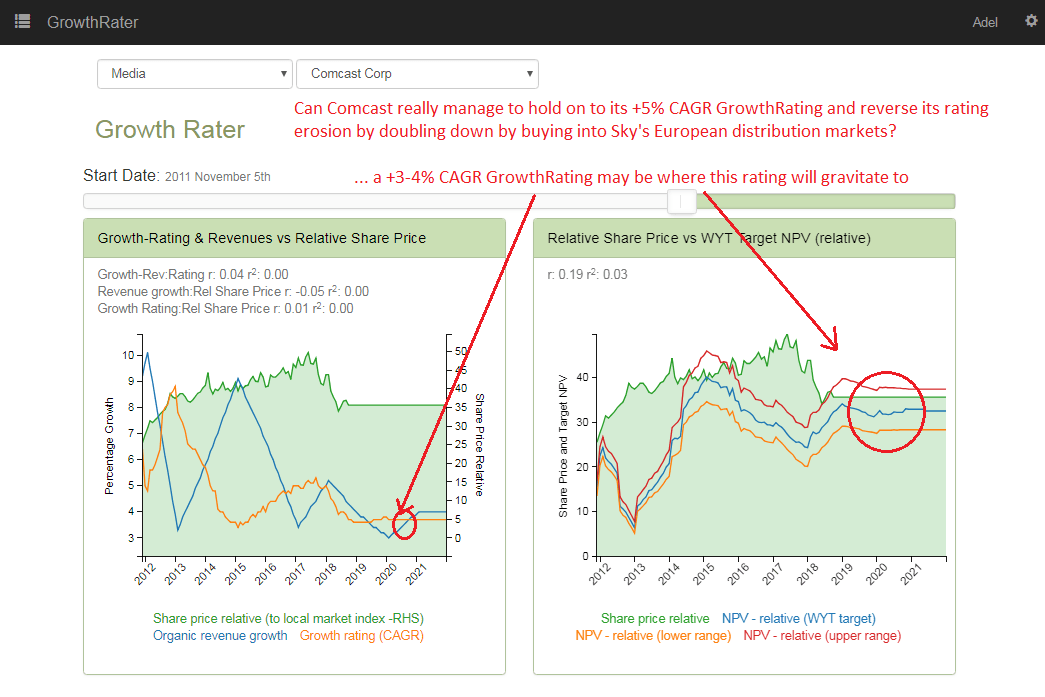 Doubling down to try and defend an already eroding rating