Spare a thought for those long suffering shareholders of German commercial TV stocks, RTL and Prosieben as Morgan Stanley dumped on the stocks with a negative report on Friday, sending them down a further 7% and -6% respectively against the DAX index that was up +1%. Presumably it was another rendition of the argument that they were making a hash out of their online streaming platforms, although at current levels neither stock’s ratings are assuming much in terms of growth.

Of particular interest to me though was Prosieben, whose shares have already been crushed this year, and I have included a full comment in the premium WebApp.  With the stock now trading on a 9% dividend yield and >8% OpFCF yield, there seems to be three main possibilities at work here

Taking Prosieben as the example, #2 would be the most worrying possibility and one that hasn’t been helped by a trend in some German reporting to focus heavily on what are sometimes peripheral issues and data points while not addressing the core value drivers.  For years PSM was investing heavily in digital marketing assets, with convoluted ownership structures which included barter overhead that would find its way back into the consolidated P&L as sales. Perhaps this was considered ‘smart’ by the previous management, but weakening top line as the pace of acquisition slowed and the change of management suggests otherwise. A feature not helped by the subsequent hasty consolidation of these digital marketing assets and attempt to establish a ‘market’ valuation. At best, this was a misguided or a poorly communicated strategy and at worse an attempt to over-state the true profitability of the group. Max Conze has been CEO since end February and the Group has had many opportunities to alert investors as to an impending writedown, or plan to abandon the dividend, but has not availed itself of any of these, instead merely re-affirming pre-existing full year guidance. In this instance, for the group to suddenly turn around and accept some of the very accusations that it had denied from Viceroy, would surely open it up to massive class action lawsuits.

#1, has the group valued as a low/no growth proposition rather than the racy digital marketing business the previous CEO (Thomas Ebeing) had been trying to turn itself into. On current revenue performance, this might not seem too unreasonable, with the poorly explained lag in its core German TV business despite some very respectable audience statistics. The group would seem to have the scale to develop audience delivering German language programming in an advertising segment that still looks robust, unlike what has happened to print media. Once again, the lack of transparency in the added value cycle of origination to audiences and onward to advertising seems to undersold what still looks to be a robust business in a still strong consumer economy.

#3.  The de-rating hitting German commercial TV stocks has been repeated across most European markets, which suggests a more broadly based concern with this medium ahead of a possible tightening to the monetary cycle, albeit still being deferred by the ECB. While the political volatility over the migrant crisis persists and increased tariff uncertainty threatens German exports, including the all important auto industry, Germany remains the economic powerhouse of Europe as well as the consumer market with greatest scope for expansion. What seems clear is that investors have little confidence in any growth strategies outside the big internet plays and will just ‘go with the flow’ in terms of valuation. By that I mean pricing in comparable rates of growth into the valuation as are being delivered organically on the top line. Ergo, deliver flat to low single digits rate of growth and that is about all you can expect to see as a GrowthRating.  While the immediate outlook doesn’t suggest much in the way of a pick-up in the current lethargic rates of growth, there does come a point when high OpFCF yields will drive corporate activity, either in terms of consolidation or stock buy backs. With a >9% OpFCF yield and a leading stake in German Language commercial TV and therefore Europe’s strongest economy, it wouldn’t be the first time that large US media interests were attracted into the market. 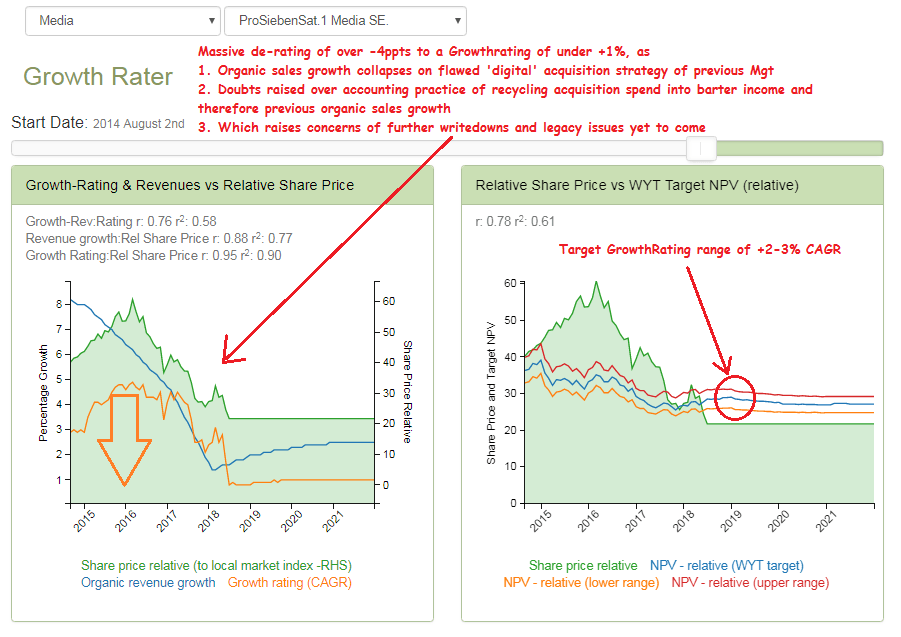