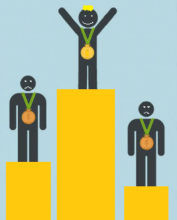 So if Trump’s tariffs are going top hurt the US so much why is the US dollar going up by so much? If Trump’s tax reductions are going to increase the budget deficit, why are currency markets so unconcerned?

It is because currency markets understand Trump is going to win.

His tax cuts are going to win more seats for the republicans in the forthcoming mid-terms and he’s going to win concessions from his main trading partners on tariffs. Big companies that have been expanding margins by outsourcing production to third world countries with no social welfare to support are up in arms and along with them, their paid for media and army of bought economists. Joe public in the US however, whose real income has been crushed by globalisation has felt the real consequences and can understand a 20ppts disparity in tariffs on cars is unfair and the righteousness of Trump’s campaign to level the playing field.  With 70% of the US economy generated from domestic consumption and this supported by rising private sector income growth and tax reductions, it was indeed essential for Trump to stop a further surge in imports and deterioration in the trade deficit. The losers in this rebalancing process are whinging, as expected, but the currency markets are seeing through this and clearly expect the US to come out on top.

Winning so much that it hurts?

Well, if it means everyone wants to invest in your currency, then a rising US dollar is going to mitigate some of the tariffs and provide additional currency translation headwinds for your exporters.  The rise in the US dollar from Q3 this year will start to reverse what were conversion tailwinds on reported sales and earnings for US corporations. In the below analysis I have assumed sales on a global GDP weighting, which shows a diminishing tailwind over the first two quarters of this year reversing to a rising headwind out to Q1 of next year. 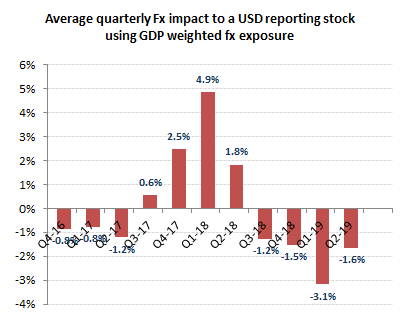 A popular US dollar borrowing more money is the nightmare scenario for many of its trading partners, particularly if tariffs deny them the offsetting competitive benefits of a weaker currency.  Why would you want to invest in a weaker Euro when yields are also a fraction of those available in an appreciating US dollar? What happens to consumption and Government deficits in regions such as Spain should the ECB no longer be able to artificially depress borrowing costs. With European GDP more sensitive to exports and therefore US tariffs, the combination of falling profits and rising interest rates, on unresolved structural deficits, would be a disastrous combination that would threaten a downward spiral, both economically and politically. What then, game over as the EU applies credit and exchange controls?