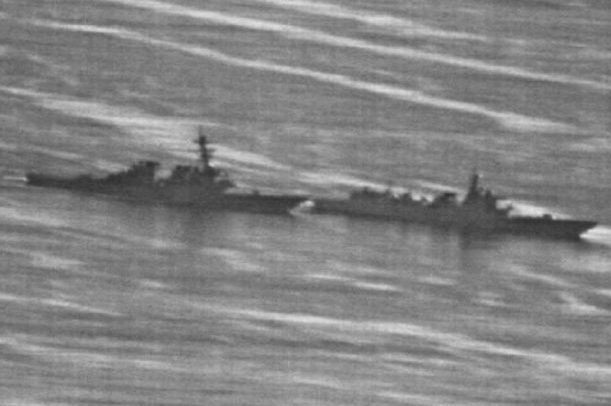 These are dangerous waters for investors. Not just from the visible reefs, such as the rising trade and military tensions, but to what remains hidden, as Trump positions himself ahead of what could prove to be the most important mid-term elections for a generation. This is a game however, where many of the key pieces are being kept off the table, which forces investors to try and anticipate these future actions rather than merely extrapolating current trajectories.

Extrapolate the spiralling trade and Federal budget deficits and what seems to be a return to 1980’s ‘voodoo economics’ and you are right to be alarmed. View the ratcheting up in trade conflicts with China towards military conflict and this can soon look like an end of Empire event. Add in rising bond yields on what is still a hopelessly over-leveraged global economy and this camel has more than just straws to worry about. While the ‘J’ curve effect from the tax cuts and impending tariffs can be expected to have an initially adverse impact on both Federal Budget and current account balances, the recent deteriorations require a strong constitution, with Federal debt up by around $1.3 trillion YoY (of >$21tn) and the trade deficit up +6% in August t0 $53.5bn, ironically including a +4.7% increase to $38.6bn with China. As sound bites go, this is hardly an endorsement of the current strategy, which is perhaps why the rhetoric against China is being wound up. Firstly with the escalating confrontations between their warships in the South China Sea and now with the accusations of hardware bugging by the PLA of sensitive servers used by large US corporate and possibly also sensitive US government users. Notwithstanding, much of this has been known about for years, is is merely a coincidence that this issue has been blown up now? 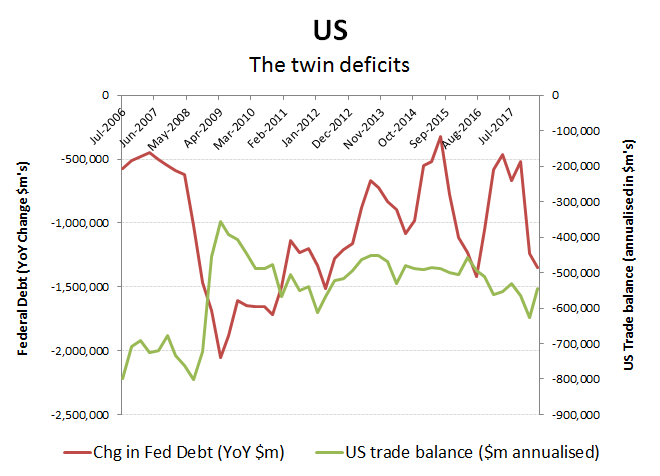 This of course pre-supposes that Trump has no plan to tackle expenditures.  A decade ago, voters elected Obama in anticipation of being rewarded from his “stash”  without being overly concerned where this was coming from, so why would you expect Trump to want to spoil the party ahead of the mid-terms? It ought to be fairly obvious that the tax stimulus policy will not be self funding and will also require some deep cuts to entitlement. To enact these however, Trump needs to retain both Houses and a with fewer RINOs, although it might be unwise to telegraph this ‘austerity’ if he wants to avoid encouraging his opponents to get out their voters.  For voters following their wallets, what is more important is employment and wages and here the data on average wages and job growth remains positive, with September average hourly wages up +3.5% annualised (and +2.8% YoY). 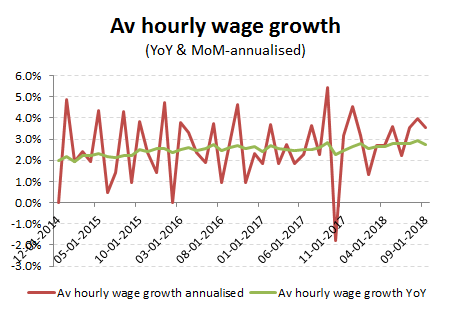 While September private sector job growth of +121k MoM (+112k excl changes in seasonal adjustments) was below some expectations, the combination of weather distortions from the early start to the hurricane season as well as coming off a bumper set of figures for August suggests it may be too early to start panicking. 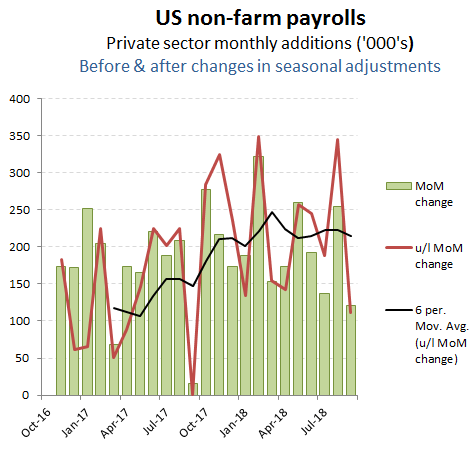 Although the deterioration in Federal Debt following the tax cuts remains a major challenge for markets, there does seem to be a silver lining.  While Federal Debt is up to pay for the tax cuts, not all of it has been squandered on Chinese imports, but appears to have been used to cut personal debt leverage (data up to and including August). 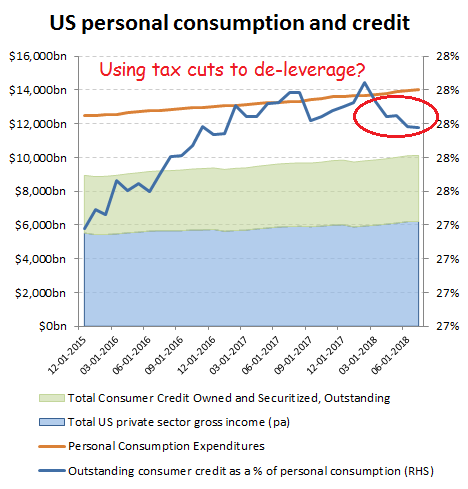 Digging into the September employment data in a little more detail doesn’t suggest too much cause for concern, with the hurricane effect reflected in job reductions across Leisure & Hospitality and Retail segment. Construction however appears to have been broadly unaffected, while Goods Producing sectors remain buoyant as does Mineral extraction following the recovery in oil prices. With steady growth across many of the manufacturing and professional services segments, the underlying data suggests a somewhat more robust monthly report than the bottom line figure might have implied. 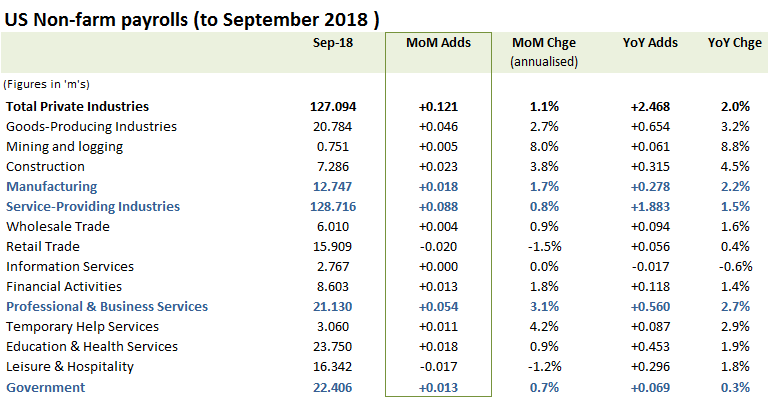