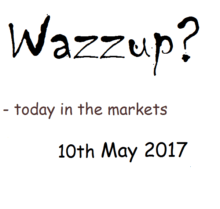 Could we be approaching a mid-year trough in trading as we start cycling against considerably easier comparatives in the second half of this year and ahead of the introduction of re-transmission fees? While a nice thought, we still have the major uncertainty surrounding the forthcoming Brexit negotiations (or perhaps lack of them) following a General Election which seems aimed at securing a mandate for some ‘shock and awe’. With agency NAR estimates drifting lower for May and June and the CEO jumping ship in the face of flat organic studio revenues, a modest valuation rating is challenged by negative forecasting risk. That means stay on the side-lines for the next quarter as things are more likely to get worse, rather than better in the meantime!  To model the impact of your view (assuming you have one), check out the ‘Analytics’ section, pick up the historic margin or error on revenues from the Growth Rater tab of +/- 3ppts and then plug this into the ‘Sensitivity’ analysis to see the impact on the valuation.

How hard is that? 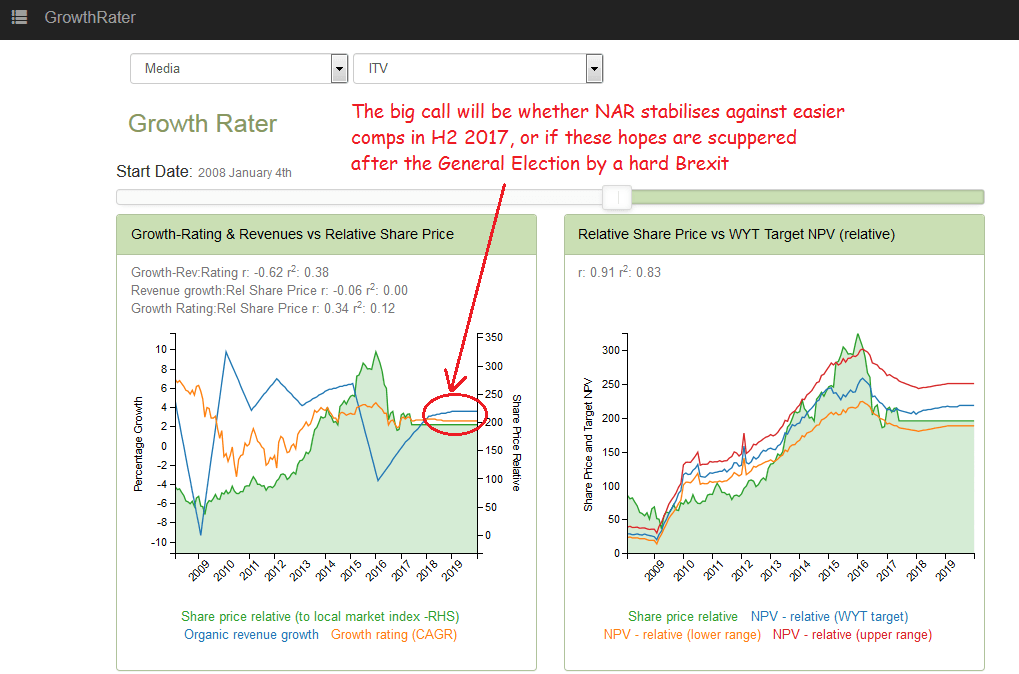 Are we passing the point of peak pain or is there more to come?

Wolters Kluwer – Can the group restore organic growth in a flat market without sacrificing margins? Yes, but with organic revenues hovering at under +3% pa and with only modest progress in underlying margins, and that substantially due to lower restructuring charges. After a near decade of management ‘restructuring’ initiatives this still feels like rather thin gruel, albeit extend the trajectory far enough (say to FY18) and the prospective growth rating and organic revenues might converge to within 100bps of each other. A more radical corporate restructuring to exit the laggards and invest more behind the winners (eg clinical solutions) remains an outside possibility, although management seems to remain committed to sailing the barge on as is. In more normal markets the valuation would look ambitious, but with Draghi now full retard with NIRP and corporate bond purchases, the lack of fireworks and a >5% plus Euro OpFCF yield on Wolters might not seem so outlandish. What’s really needed is a comparable KHC/Unilever situation to shake things up.

Last trading update – Q1 FY17 IMS (sales): Reported revenues up +6%, albeit with organic at only +2%, fx at +3% and acquisitions of +1%. Adjusted EBITA margins are reported to be stable.

By division this included: 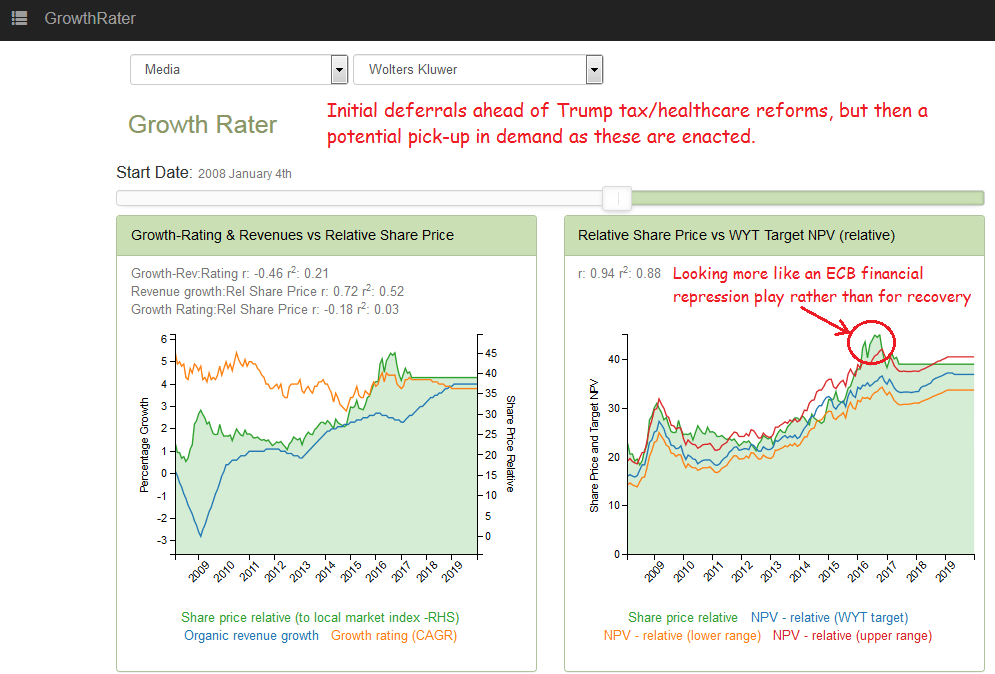 Last year’s legacy problem areas of Brazil and Offshore remain a drag on group performance, albeit these are diminishing as we cycle thru the comparatives and against a more stable oil price environment. Reporting another “encouraging” pipeline of new contracts, the group is re-affirming its previous guidance of these increasingly supporting an improved rate of organic revenue advance into the second half of this year. While prospective GrowthRating of approx 5.0% CAGR over the next 18 months makes the stock ‘fairly’ valued, rather than ‘cheap’, the improving trading momentum and macro tailwinds should ensure organic revenue growth recovers back to support what has been a relatively steady 5 year trailing GrowthRating range of +5.2-5.9% CAGR.

Last earnings report – H1 FY17: The lagged, but diminishing, impact of contract losses and last year’s macro reversals in the Brazil and Offshore businesses diluted the continued strong performance out of N. America. Excluding the significant fx tailwind (of +16%) of translating back into sterling, organic revenues increased by +3.6%, with constant fx EPS advancing by +4.2% on a +20bps margin improvement (to 7.6%). Excluding the +£11m reduction in restructuring charges would have reduced the margin advance however to +10bps and the constant fx EPS growth to approx +3%.

Special dividend: Proposed distribution of £1bn as a special dividend which will also include a share consolidation (treated as a share-buyback in our model) 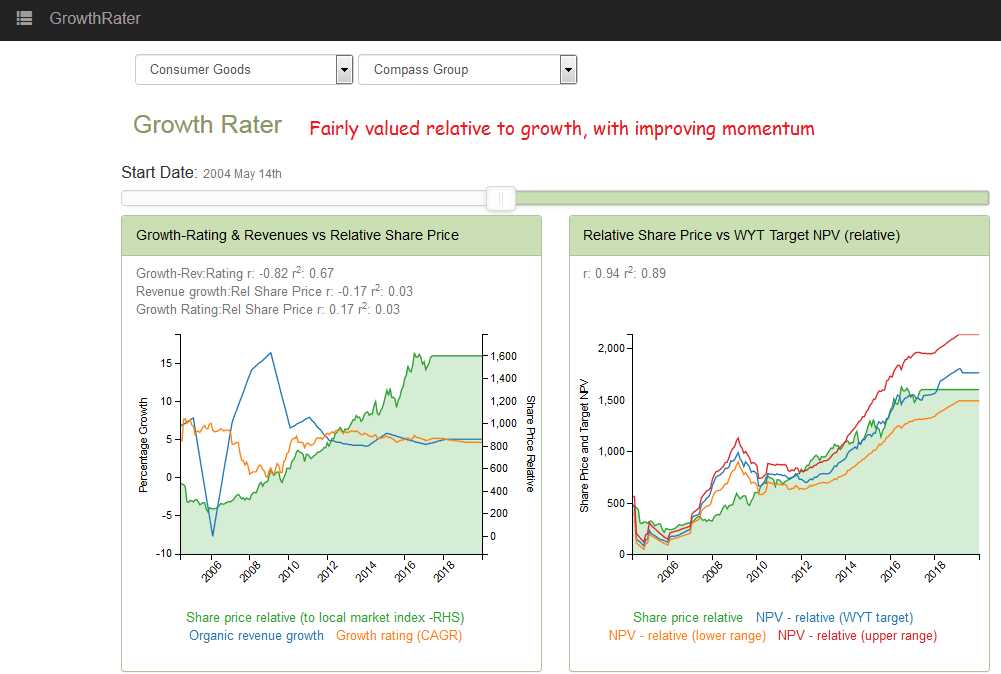