Economists predict 2018 for the next recession – LOL

Well that’s okay, according to a recent survey by Bloomberg, most economists don’t think the next recession will be until 2018. As most of these are employed by banks with a vested interest to pump shares, this is most convenient, at least on two fronts. Firstly, the very low risk of an early recession is supportive of market buy recommendations. Also, the date where a recession is seen as most likely, is so far out as to pitch it beyond the normal three year forecasting horizon of the stock analysts. The means fewer embarrassing inconsistencies between the two groups to explain to compliance.

Of course for a group that couldn’t forecast its way out of a paper bag, such long range forecasts are little more than PR; indeed on past performance it probably means the next recession will be anytime except for 2018.Â  Any quick search on the subject will provide ample evidence to the accuracy of past forecasts. 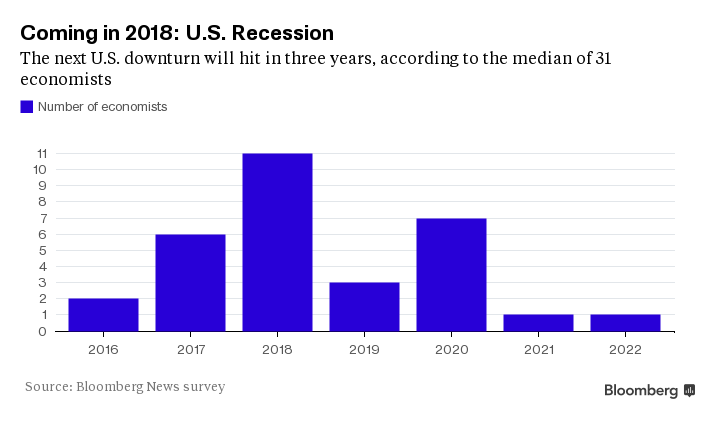 Well now we know when it won’t be!

One such analysis was conducted last year by a couple of IMF researchers titled:

“Can economists forecast recessions? Some evidence from the Great Recession”

The authors are senior research officer and advisor, respectively, in the IMF’s Research Department.

In their study, they looked at recession predictions for the 2009 downturn at different points, with the initial date being the September prior to the year ahead. For 2009 therefore, this would have looked at forecasts that were being made as at September 2008. As one can see from the below chart, a glorious ZERO number of economists were predicting the 2009 recession at this point. While one might wish to be charitable and claim that this was a long way out, this is considerably less than the horizon for the current Bloomberg foreacsts. It is also a howler in that there was very clear evidence by the end of 2008 that the wheels were already falling off the US economy. Amazingly something completely missed by these economists, although not by the market, which had been pricing the collapse in from at least a year previously.

Number of Recessions Predicted by September of the Previous Year

So what was this evidence?

No less than the US non-farm payrolls, a very reliable indicator of corporate confidence. Reliable in that in thirty years, there had never been a false negative. When month on month payrolls have contracted by over 200k, it always preceded a recession. In February of 2008, private sector payrolls had fallen by around -114k MoM and by April the monthly decline was running at over -200k per month. By September of 2008, when the economists forecasts for 2009 were taken, the monthly private sector payroll decline was over -480k! So while the data from what companies were actually doing was screaming recession, the official line as parrotted by the economists was “don’t panic”. 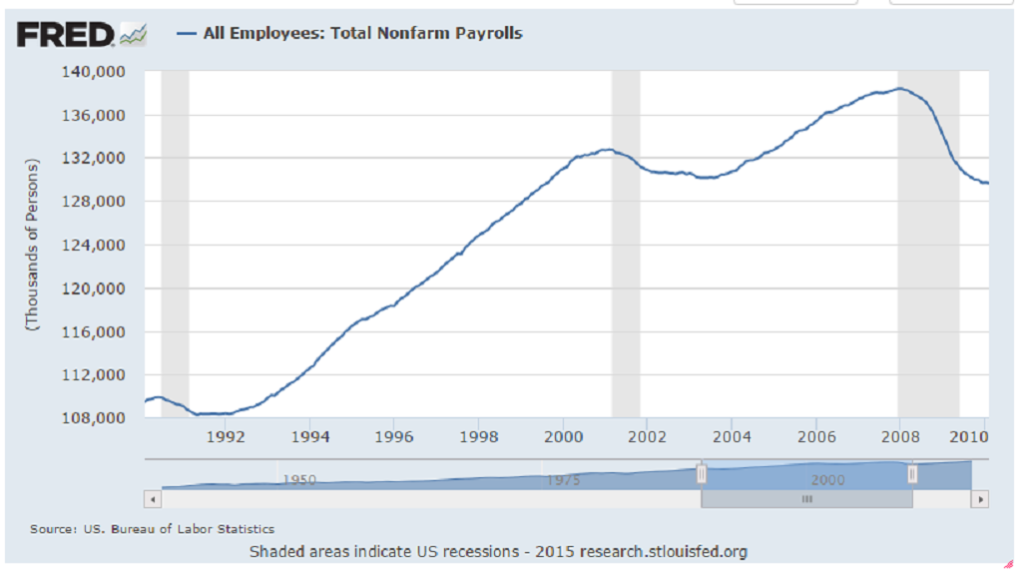 US industry had been sacking staff aggressively since Feb 2008

January beat for US non-farm payrolls – or did they?