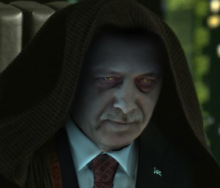 Normally the Turkish military are quite efficient with their coups. This one however, looked surprisingly lame, with what seems only a tiny turnout and a complete failure to seize control of the media or airports. This enabled Erdogan to fly into Istanbul within a few hours and broadcast a rallying call to supporters on TV. Erdogan seems a lot more organised than these ‘rebels’ and within 24 hours, has not only crushed the ‘coup’ with a claimed 2,839 army members arrested, but has purged an almost equal number from the judiciary, including 2,745 judges and 140 appeals courts members. On the wave of public indignation, further purges can now be expected on the armed forces to ensure his complete control. Just as well he kept a list, otherwise this is very fast work.

So there you have it. A Turkish President that already has a reputation for suppressing press freedom to criticise him (as well as a conviction for inciting religious intolerance), removing the last remaining checks and balances to his power. Smart guy, albeit taking Turkey further away from ever being an acceptable participant in the European experiment.