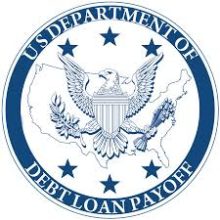 Listening to Pearson explaining away a -7% fall in H1 organic revenues, one might have come away with the impression that the group is bravely responding to a perfect storm of cyclical forces largely beyond its control. We are reminded that College enrolments (and therefore demand for HiEd textbooks and learning materials), is contra-cyclical to (youth) employment and that weaker economic activity out of China and lower commodity prices have also temporarily punctured demand from what are still great structural growth opportunities, including markets where the group has been heavily investing such as Brazil and South Africa. All this is true, but only to a point, as is the continued drag on the normally offsetting cyclically phased K-12 publishing activities from persistence pressures on Government. 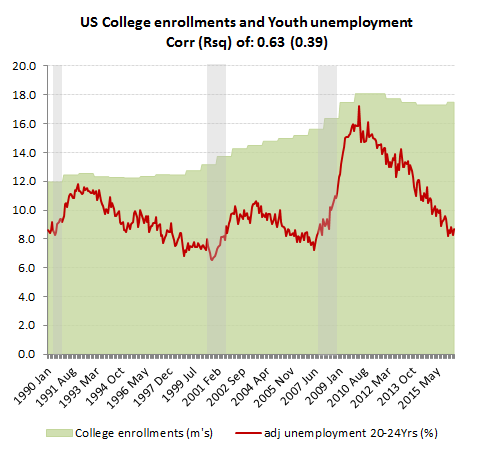 College enrolments have been contra-cyclical

Overlaying Pearson’s relative share price over the movements in US youth unemployment (20-25 years) and college enrolments would seem to further support the contra-cyclical credentials for the group, although this would be to seriously under-estimate the underlying structural forces also at work here. 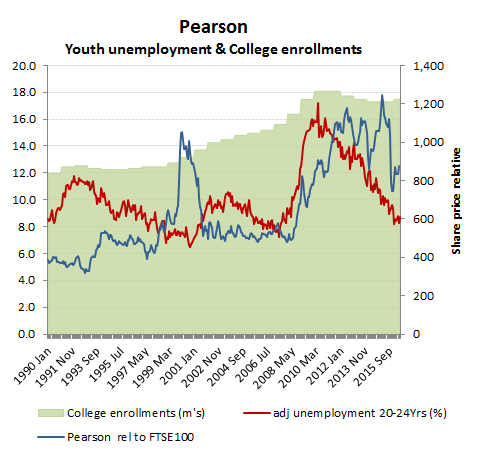 Pearson – a contra-cyclical or are there structural issues at play?

Correlation, as we are much reminded, does not imply causation. With regards to Pearson, there is a lot more at work here. The most obvious is the issue of funding, which Hilary Clinton is currently using a lure to collect student votes with her promise of student loan relief and the “goal” of a debt-free college for future graduates.  Perhaps this ought to have also been accompanied by a promise to work for ‘World peace’ as funding this as well together with all the wars she was supporting both as senator and as secretary of state may not be possible without more QE (4’ever).

College enrolments surged after 2008, not just because of rising youth unemployment and a desire to earn a qualification for a better life and salary, but because of the availability of easy credit for student loans to fund it. Courses with little meaningful value to future employment prospects were promoted, while tuition fees sky-rocketed; by >+40% at = CPI at four year public colleges. Now almost 70% of all 4 year graduates are in debt, with indebted graduates carrying average debt balances of approx. $30k each, with total outstanding student loans of over $1.3 trillion.  Unemployment for the 20-24 year age bracket has fallen, but to still above the rate just prior to the 2008 financial crisis whereas outstanding student loans have more than doubled. With high drop-out rates (including around 40% at community colleges) is it surprising that there is now push-back from potential students. 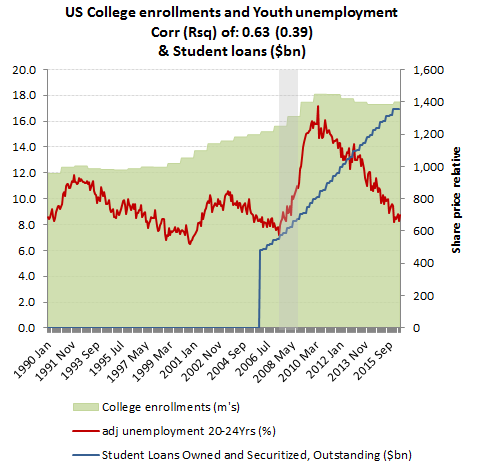 Boom based on debt – now running out of road!

Of course all this pre-supposes the value of a College degree is what it used to be. You’ve no doubt seen the longer term studies of the greater average earnings power of graduates versus non-graduates over time, but will this still stack up when you enter the job market with a liberal arts degree?

So assuming you are one of the fortunate students actually to have managed to graduate, what are the prospects of getting a job. BLS data on graduate unemployment for 20-25 year olds confirms that having completed your degree and racked up your student debt, it should be easier to get a job, with the trailing 6 month average unemployment rate running at 5.3% vs the 8.5% overall average for that age group; an advantage of +3.2ppts for the graduates.  With the gap appreciably diminishing, from 4.4ppts a couple of years ago, the relative advantage is diminishing, which against a rising cost helps explain the contraction in enrolments, notwithstanding the slight headwind from demographics.  This however is not merely a cyclical phenomenon, but a structural one as the current funding model for college graduates runs out of road. For Pearson, there is the frustration of having a drawer full of digital learning tools, including much needed remedial aids, but no one seems to be listening as the narrative is drowned out by other vested interests such as the politicians and teaching establishment.  Pearson may wish to focus on the cyclical aspects behind its H1 organic revenue slide of -7% and the progress of its offsetting cost reduction plan, but the important data point was the stalling growth of its digital MyLab registrations to only +2% globally and +1% for N.America. When the problem is revenue growth, cutting overheads only provides a temporary fix.

Deferred revenue indicator: For publishers, this can provide a useful forward indicator for sales. It can however be subject to distortion, particularly for publishers transitioning from one off sales to digital subscriptions. For those taking Pearson’s disclosure of a +5% increase in underlying deferred income at end H1 FY16 as a lead indicator that sales have troughed, take care, as this is not a reliable and we’ve been here before. At end FY14, the group highlighted a +10% rise in underlying deferred income only to subsequently report a contraction in organic revenue growth, from +0.5% for FY14 to -2% for H1 FY15. At end 2015 meanwhile, the underlying deferred income was again disclosed as being up, this time by +8%, only for organic revenue growth to again slip back, to the -7% just reported for H1 FY16. 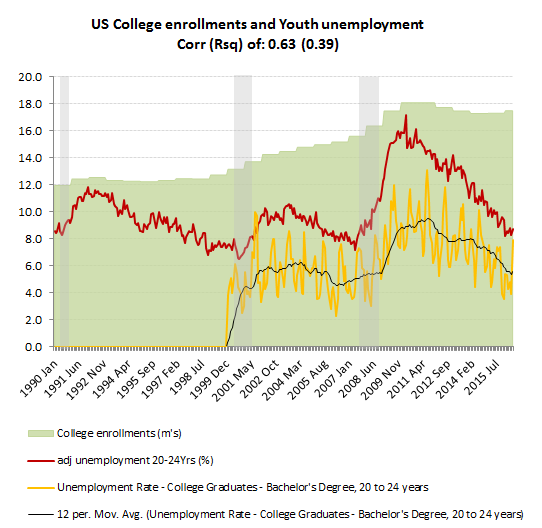 Employment growth has been faster for non-graduates!