June US non-farm payrolls beat expectations! But did they?

Another month and another non-farm payroll number to interpret. Before you start to worry that the ‘better than expected’ MoM increase in private sector employment growth of +265k is going to accelerate the Fed’s interest rate tightening schedule, don’t. As usual, the numbers are open to interpretation as well as substantial revisions.

The May and June data seem to have been particularly volatile this year and not helped by approx 35k striking Verizon workers deemed to have left the workforce in May, only to return in June. Seasonal adjustments provide an additional distortion, with June’s adjustment of -1.135m increasing by 83k YoY, partially recouping the 57k reduction in May and presenting an inherent margin of error to these estimates that are usually glossed over by the subsequent news reports. A more representative assessment would be to take May and June in combination as there looks to have been some leakage between them which have probably contaminated the individual monthly data. For the seasonally adjusted figure, this would mean additional private sector jobs over the two months of +259k or a monthly average of almost 130k.  Stripping out the slightly higher negative seasonal adjustment (of 26k), would therefore suggest an underlying un-adjusted increase for the two months of +285k, or an average MoM rise of just under +143k pm. While better than the proverbial poke in the eye with a sharp stick, this is below the approx +200k per month average from the YoY increase in the un-adjusted figures to June and also a long way short of persuading the Fed that a rate rise ought to be imminent.

Repeating the caveat of the perils of over analysing data with such sizeable adjustments, the reported seasonally adjusted numbers for June present a picture of a stabilising manufacturing base after recent falls, while growth is driven primarily again by the service industries. The stabilising trend for mining and logging would seem to confirm what is happening in oil, with rig counts reflecting recent price rises, although the pickup in financial activities would seem to go against the grain and perhaps may be revised down when we review next months data. 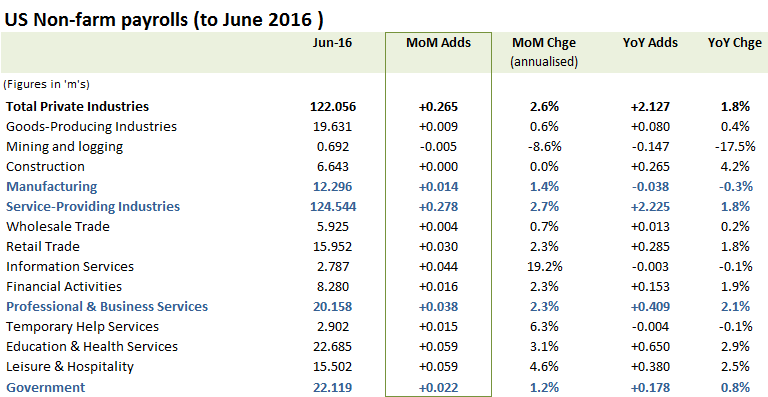 On the numbers as presented, private sector incomes still seem to be growing at around +2.3% YoY, which with YoY private sector jobs up by +1.9% implies total private sector earning growth at approx +4.3%, equivalent to a +1.3ppts contribution to the broader economy’s GDP advance of approx +3.3% (at current prices). 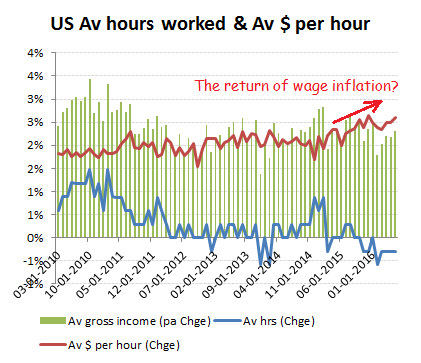 Signs of wage inflation or just the mix effect of less part-time workers?