Never let a good hurricane go to waste. So when a couple turn up within a few weeks of each other (Harvey hitting Texas on 25th August and Irma skimming Western Florida on the 10th September) no one is going to take the estimated employment data for September as being particularly indicative of the underlying state of the economy or as a forward indicator for Fed monetary tightening. With markets focusing on the -40k MoM reduction in overall private sector jobs in September, why not slip through a -38k downward revision to the previous couple of months figures (-51k to +138k forJuly and +13k to +169k for August)?

How big an impact the hurricane season is having to jobs this year versus last however remains conjecture at this stage, with the BLS data not providing the regional splits for the affected areas. By category, the -111k contraction in Leisure & Hospitality jobs (including -105k from eating and drinking establishments) looks quite reasonable, particularly for Florida’s theme parks, while the slowing rate of job formation in their ‘Mining & Logging’ segment probably reflects the impact of Harvey on Texas fracking activity. The rise in average hourly wages for September of +12c to $26.55 (+5.4% annualised and +2.9% YoY vs +2.7% in August) meanwhile probably just reflects a mix effect from the loss of the lower paying waitering jobs.

The above however, fails to adequately explain the reversal in manufacturing jobs, which had been originally reported as having increased by +38k in August. As a central plank of the Trump manifesto, the -1k MoM reduction in September manufacturing jobs will be less welcome. In part, this may just reflect an overly exuberant estimate for August, which included a +14k increase in Auto parts jobs which, we highlighted at the time, seemed at odds with the ongoing contraction in US vehicle sales.  While the hurricanes may indeed have also impacted production and therefore manufacturing jobs in September, it doesn’t however explain the downward revision of -32k to the previous months manufacturing jobs total.

With Trump so far failing to deliver on his promises to restore well paying manufacturing jobs to the mainland USA, it perhaps explains what appears an increasingly defensive trade tariff policy. In this environment, the US administration has become highly responsive to potentially protectionist calls by domestic manufacturers to impose punitive tariffs on overseas competitors as seen recently with Boeing/Bombardier.  Weak US manufacturing jobs data therefore  has become an increasingly important factor in driving US trade protectionism. 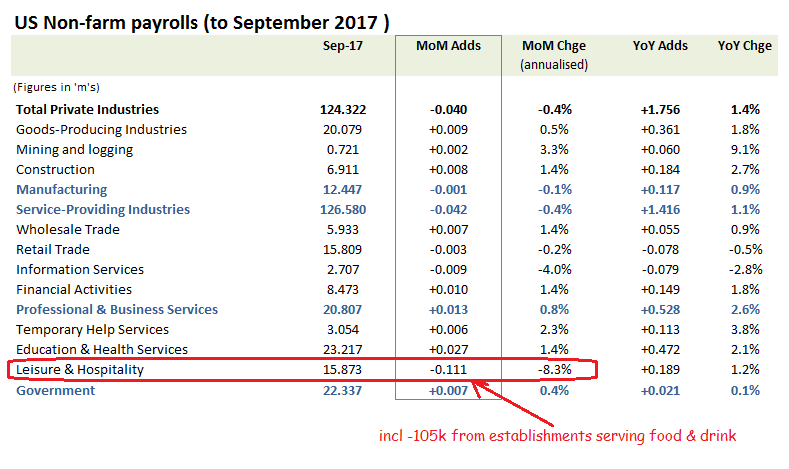