Over three months on from the Brexit vote and the World still turns and UK economic activity has been largely unaffected, with August retail sales up +6.2% YoY and September data showing UK consumer confidence index returning to pre-referendum levels (GfK) and UK manufacturing PMI (Markit) hitting 55.4, the highest level since May 2014.  Lower sterling will be putting pressure in imported raw material prices, but little of this had fed through to the last inflation statistics, where underlying deflationary pressures held the August CPI increase to only +0.6% YoY, a similar rate to July’s.  As with the period immediately following our ejection from the ERM, lower exchanges rates for sterling will also have a beneficial effect on competitiveness for our exporters as well as for those groups with substantial international earnings, which when converted back into sterling will provide higher cash flows to support greater dividend returns for shareholders. Q3 of 2016 will have been fairly muted in terms of currency volatility for US dollar and Euro reporting groups, but for UK sterling reporters it will have been a bonanza. While each will have its own specific currency exposure, I have laid out below the potential impact using average rates and assuming a currency exposure weighted to global GDP. On this basis a UK sterling reporting group will see a currency translation benefit of approximately +14% for both the recently closed Q3 as well as for the Q4, with an +8-9% benefit into the first half of 2017. For US, German and Japanese car manufacturers this could be particularly painful, except for those already with sizeable investments in UK manufacturing.  As such, the UK has become a considerably more attractive place to build capacity and hire staff, albeit with one very big caveat; that of the real Brexit negotiations have yet to start. However, with Theresa May announcing that she will trigger the formal Brexit process (with article 50) by end March 2017, we are perhaps soon to see the end of the phoney war . 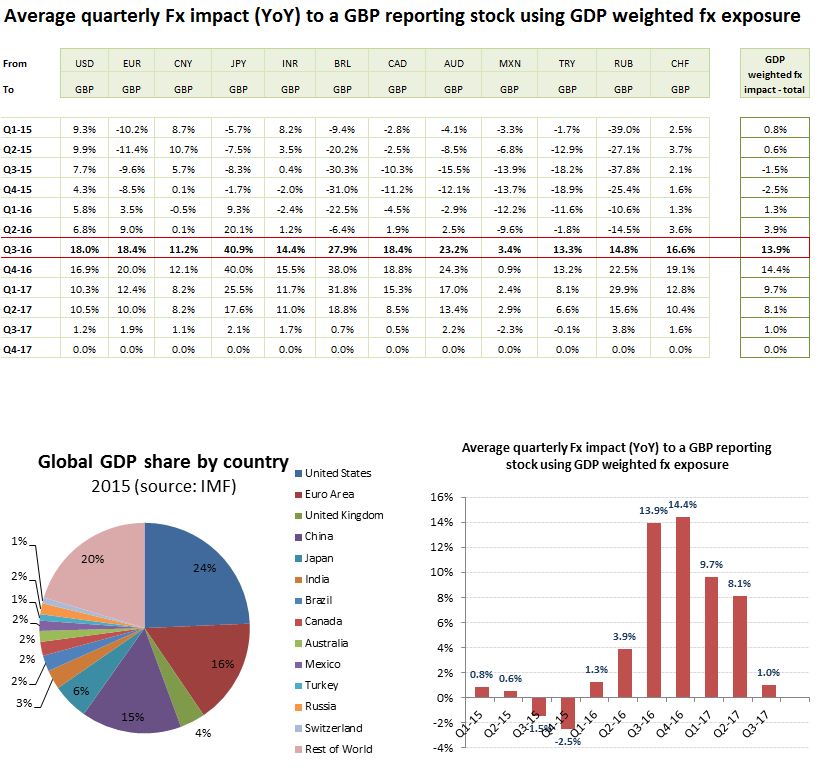 The Phoney War or ‘Sitzkrieg’

The death of empires is never easy. Vested interests and political ambitions are destroyed and those clinging to these will fight with all the desperation and cunning of a cornered rat. Unless you have been asleep and haven’t noticed the massive layoffs at Commerzbank, the share price and solvency concerns at Deutsche Bank or the squeals for bailouts across most of the Southern European banks, there is something nasty brewing across the channel which has its roots in the waning political support for the EU, where electorates are finally beginning to understand the real agendas of the political elites and that this is indeed a transfer union. This question mark at the heart of the EU with referendums due in Italy and elections next year across Germany and France provide a challenge to the ECB and in turn the entire European banking infrastructure on which it relies. Without ECB QE support, where do you think Spanish, Portuguese or Italian government bond yields would be and what happens to all the holdings of these that the respective national banks have bought on borrowed ECB loans? Indeed, what happens to these economies who have piggy-backed their deficits and consumer ‘recoveries’ on these artificially low interest rates? Regardless of the attempts by Brussels, national self interest are emerging across Europe. Germany may wish to retain access to UK car buyers, but will be held hostage by the V4 who threaten a hard Brexit by insisting on free movement of workers when most of the constituent members are themselves resisting accepting migrants. A hard Brexit may well be counter-productive and ultimately provide the final nail in the EU as currently constituted, but at this stage it is difficult to see any other alternative, unless any of the intervening European elections provides enough of a cathartic shock to encourage a more fundamental reform of the existing club rules and management.  While we all hope for the best, investors may need to prepare for the worst and Sitzkrieg’s rarely last!