The second quarter has now closed and after some fairly volatile currency movements in the closing week, it is a good point to take stock of the potential impacts to company forecasts.

As markets should be already aware, Sterling reporting groups will benefit from a not insignificant fx translation tailwind from the Q3 on overseas income and those with a higher UK cost component (eg professional publishers and in particular science journal publishers such as Elsevier and Informa) will also experience a margin benefit. For the Q2 about to be reported, the modest movements in average rates means the principal impact will be felt on balance sheet revaluations at the period end. UK groups with overseas debt will clearly see the sterling value of these liabilities rise, although these tend to provide a natural hedge to overseas income and unlike some German groups, these revaluations do not get put through the P&L as a charge to profits. If current rates prevail however, the impact on H2 reported earnings will be quite substantial for UK overseas earners, particularly for exporters where a cost/revenue mismatch will provide either a competitive or margin advantage. Those acquiring overseas goods to resell to cautious Brits however will be squeezed. These may also include payTV broadcasters such as Sky. In our ‘Analytics’ section, all our groups are fully updated for recent currency movements and below we lay out an indicative analysis of the P&L impact of these changes from 3 different currency perspectives  1) A GBP reporting group, 2) a Euro reporter and a USD reporter. We have included a table and chart for each showing the top dozen currency pairs weighted by their GDP contributions. 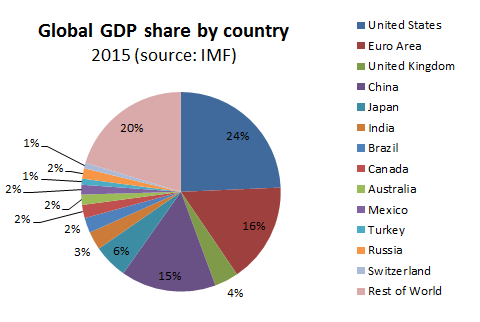 We estimate that the period end rate for sterling in Q2 was almost -6% lower QoQ, including over -7% against the US dollar which will need to be factored into higher levels of sterling converted debt levels for the forthcoming results season. For the P&L, we estimate an average tailwind to sterling reported revenues assuming a GDP weighted exposure of approx 3.9%, although for Q3 this could amount to over 13% if current rates prevail. 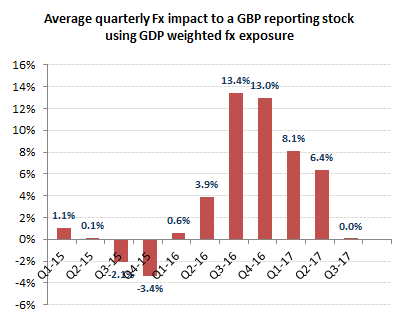 With a relatively light exposure to manufacturing the main benefit will be to companies converting their overseas income for more Sterling. Those importing goods for overseas will need to in areas with pricing power where these can be passed on the consumers. Slowing consumer confidence from Brexit uncertainty however suggest a possible further squeeze on domestic consumer groups including retailers, TV, radio and newspaper groups.

A currency tailwind becomes a headwind. Giving the UK a weighting relative to its contribution to global GDP, the impact on EUR reporting groups would not seem overly punitive, although the higher weighting of European exports into the UK suggests a greater prospective impact to sales. For the German auto industry for insstance, the combination of weaker sterling (averaging approx -8% for Q2 and a further -14% for Q3) relative to its still substantially Euro cost base and probably price resistance given the Brexit related uncertainties, suggests a possible reversal over H2 from this important market. 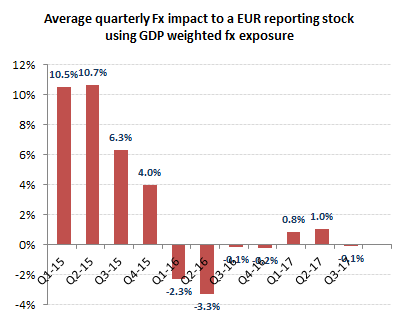 Doing this exercise provided a reminder of the substantial competitive and translation benefits Euro exporters and overseas earners have been receiving up until Q1 of this year, not just against Sterling, but in particular against the US dollar. Without this tailwind and now also facing slowing underlying demand across many of its key markets, it is plain that the ECB won\’t let a good crisis such as Brexit go wasted. Expect ever more QE and loose monetary policies.

The below chart shows the scale of the fx headwind that the strong dollar has created for US manufacturers after the Fed ended QE and signalled a policy tightening.For Euro denominated competitors and those with substantial US dollar markets, this has provided a massive support to margins and their competitive position and again highlights the extent of the competitive devaluation of the Euro by the ECB. While the markets current focus is centred around the UK and Brexit, the extent of the Euro/USD devaluation provides a warning to German manufacturers of the potential tariff response that a new US president might impose. 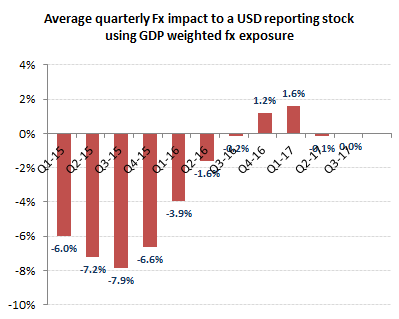 From headwind to tailwind

The big question now is with the ECB poised to unleash more monetary stimulus on the Brexit excuse, will the Fed really follow through with its threaten tightening or will it follow suit with QE4 -ever?