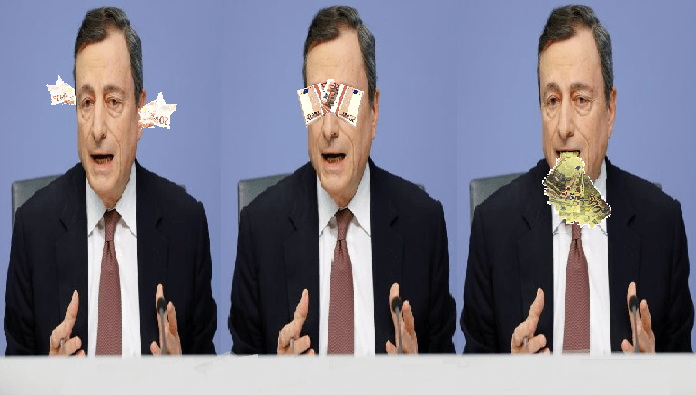 “substantial monetary policy stimulus remains essential to ensure the continued build-up of domestic price pressures over the medium term.” So says Sig Draghi in yesterday’s release of the ECB’s 2018 annual report and so much for any doubt that the ending of the asset purchase programme (AAP) in December would actually herald a return to honest financing and monetary tightening.

With the ECB already clocking up balance sheet ‘assets’ of €4.7tn (and some pretty dodgy ones at that) which represents a whopping 40% of eurozone GDP, it makes the developing conflict between France and Germany on the shape of future ‘integration’ all the more pertinent. Pertinent, because it relates to who is ‘wearing’ these liabilities. For years, the Germans have been sweet-talked into believing the EU is not a transfer union and that the Spanish and Greeks will be made to pay back the loans extended to them to buy German cars, or risk the fate of countries such as Sri Lanka when it fell into the Chinese debt trap and lost some ports. For the super-state integrationalist Mr Macron however, all this will be subsumed by fiscal union, which will inevitably result in the very transfer union that Germans have been promised wouldn’t happen. By then however, it will be too late and as the French might say “tant pis”.

While this denouement will await the EU once past the distractions of Brexit, it is worth reminding ourselves of the distortions of the current ‘leger de main’ is creating to bond markets. Facing a budget deficit of approx $1 trillion pa, the new Fed chairman Powell seems to be bottling out on the monetary tightening path bequeathed him by Yellen, to the immediate delight of bond and equity investors. The gap in yield expectations however, between US and Euro bond yields is a daunting one and not one that will be sustainable without a return to US QE, which given the scale of the ongoing debt crisis and potential risk of a run on the US dollar does not seems to be a viable option. Instead, the model being pursued by Trump relies more heavily on stimulating growth from tax reductions and funded by a combination of repatriated cash, tariffs and increased private sector investment and employment. For the export dependent and fiscally disparate Eurozone though, these options are not available, with the ECB having to continue relying on monetary stimulus, albeit increasingly looking like pushing on the proverbial piece of string. Or to mix ones metaphors, “when all you’ve got is a hammer, everything looks like a nail”.

Underlying this dangerous disparity in global bond yields is the growing divergence in central bank monetary policies. It ought to be no surprise then to see an inverse relationship between central bank asset purchases and their respective gaps in bond yields therefore. Without the market distortions of central banks buying their own ‘shit’, yields soon normalise. While the US with is current policy shift to lower tax and higher internal investment (including tariffs) is helping it to manage this transition, these options currently are not available to Sig Draghi, hence his softening tone and talking up further monetary stimulus to offset the slowing global growth outlook, which in part has been a consequence of the US’s very attempts to normalise monetary policy.

While the EU likes to portray itself as a beacon of economic performance, the foundations are built on sand, which is perhaps why Britain’s exit is being used as a catalyst by integrationalists such President Macro to push for fiscal and therefore full political union. Without the cover of a loose US monetary policy, it is difficult to see how much further the ECB can sustain even modest Eurozone consumption growth when the ECB’s balance sheet has already ballooned to almost €5 trillion. As a proportion of the Eurozone 19, that equates to a staggering 40% of GDP, or double that of the current US Fed position. With a sub +2% Eurozone GDP growth last year, it is also worth remembering that the ECB increased its holdings of Euro denominated securities by approx +€239bn in 2018, which is also equivalent to over +2% of GDP. While the sub-normal interest rates were no doubt much appreciated by over-spending governments and consumers one wonders for how much longer the currency can withstand the more attractive yields and economic growth outlook from the US. Increasingly, the ECB is becoming the buyer of last, and sometimes only, resort to keep this party going. None of the options on getting out of this mess look particularly palatable; raise rates and risk a recession that could break apart the EU project, or carry on with the funny money and risk the same, but via a currency crisis and calls for exchange controls. Fiscal and political union is the inevitable end-game, but then we’re back to the issue of whether this will wash with Germany, that has been content with the benefits of dominating the EU, but has so far been sold the story that this new Reich doesn’t come at a cost; that being a transfer union. Hopefully this time the Brits will just let France and Germany sort it out among themselves.

Perhaps the US/Chinese tariff spat will be resolved soon and we return to a panglossian world of economic growth and no one cares about debt to income ratios hitting 300% across much of the developed economies because central banks such as the ECB can sustain negative interest rates forever. For the rest of us however, one might want to ruminate on the flattening yield curve which has been a scarily accurate harbinger of economic doom.