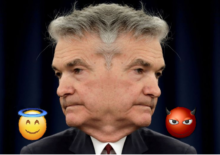 Markets are going with the ‘flow’, because that’s the only way to trade these algo-driven markets.   The new Fed chairman flip-flops from hawk to dove while the ECB hint at following suit (ahead of its May parliamentary elections) and the Chinese unleash another Tsumani of credit. Equity valuations meanwhile recoup the Q4 lost ground, notwithstanding continued trading headwinds and that most of the immediate tariff uncertainties remain unresolved.

When your nose is pressed up hard against the short term data, as most algo trading systems are, then the rally in equity markets is quite understandable. What is more difficult to anticipate in these systems however, are future outcomes.

For example will the warm mood music between the US and China actually result in early trade agreement, or are these issues merely manifestations of a larger global rivalry?  With fundamental disagreements also relating to China’s occupancy in the South China Sea, Venezuela and IP, markets may be under-estimating the extent to which this conflict could well continue to fester, before either party is willing to make meaningful concessions.

If Trump is unlikely to let China off the hook, he may well also continue to heap pressure on the EU. With a combination off auto tariffs and higher US bond yields, the ECB will have its work cut recommencing QE and sustaining NIRP and therefore continuing to fund unresolved structural deficits across most of its southern members.  If the defence of the US dollar reserve currency status remains paramount to US foreign policy, then the threat of an EU political union round the Euro remains unfinished business.

If so, then the recent apparent reversal in Fed monetary policy may just be some short term balancing of accelerator and brake to control the pace of growth in the US economy ahead of the 2020 elections, rather than a fundamental change of direction.

$4 trillion of QE and a few years of artificially low interest rates and its easy for markets to start to believe this is the new normal.  Apart from the distortions from the two world wars however, real bond yields have returned around 2% pa.  Since the development of TIPS (inflation linked) bonds, the forward expectation for inflation and real returns can be shown as per below

While less reliable than the ex-ante measurement of real bond yields and anticipated inflation priced into bond markets facilitated by the introduction of inflation/indexed linked bonds in the early 1980’s, the use of fixed bond yields excess returns over inflation does provide a still useful measurement of ‘real’ bond yields. From this basis, the real interest yields over much of the post WW2 period can be seen to be healthily ahead of current rates. For instance, since 1960 (below chart), the excess return over inflation for US 10Y Treasury bonds has average 2.7% pa, while excluding the abnormal rates post 2009, this average rises to 3.0% pa.

For those of you thinking that these higher bond yields may reflect a faster growth period following WW2, which may have resulted in an abnormally high real risk free return, then you would be mistaken. While the measurement of a ‘risk free’ interest rate presents a methodological challenge prior to the development of a secondary market in government debt instruments and before even that of central banks, a ‘land’ based ROIC analysis can be used as an proxy; offering low default risk and in an agrarian based economy, perhaps the most stable store of value and returns.

While evidence of interest rates on loans extends back to the usurious Mesopotamians at 20% pa, most rate in antiquity seem to have ranged from the Greeks 10% (dekate), the Romans 8 1/3rd (ubcia) and down to Justinian’s 5%, so perhaps not so alien to the more recent experiences, pre QE that is!

Better records since the Middle Ages on both Land returns and rents, together with inflation and land values however, provide a more reliable metric for returns, both absolute and real.  Using research from  Gregory Clark (UC-Davis), one can see a relatively high gross yield was available on property in the middle Ages of around 10% pa actual and between 8-10% real, but the dropping to a relatively stable 5% pa from 1500’s to the 19th century, with real yields of just over 4% pa.

A 4-5% pa real ROIC on Land from 1500-1800, yet we are supposed to believe a sub 1% real Treasury bond yield is the new normal after just a few years of massive central bank manipulation.