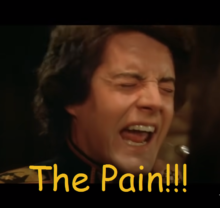 Amongst the plethora of distractions, many may have missed the truly seismic events over the last weeks of September. No, I don’t mean the rumblings under the Baltic and interdiction of Germany’s last hope for a warm winter, albeit this won’t help, but the answer to the big question that has overshadowed markets since central banks embarked on their reckless monetary experiments with MMT since 2009. That being, when the money printing and debts will pass the point of no return. For Europe, it seems that point has now been passed, as both the ECB (quietly) and the Bank of England (noisily) both buckle and reverse their brief flirtation with their planned monetary tightening and re-start the proverbial printing presses. Politically at least, Europe simply can’t take the pain of salvaging their solvency, believing instead that they can both print their way out of debt and print the missing gas, no doubt!.

Having taken the line of least resistance by resorting to a disguised monetary debasement,  Europe is discovering that it was also sliding down a convex hill above a precipice. Those aware of the Cusp Catastrophe chart may appreciate the predicament. 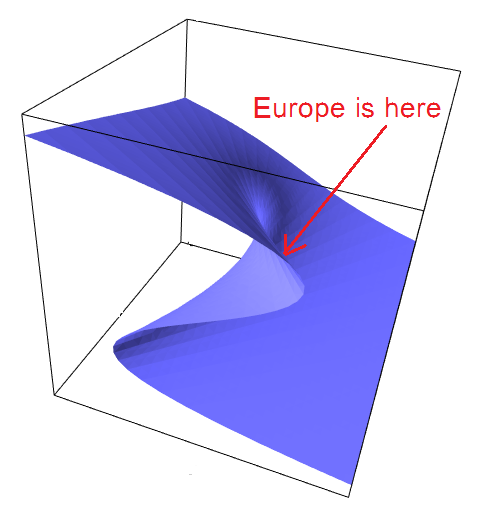 While the collapse in the UK’s planned monetary tightening and reduction in balance sheet assets was a well publicised and humiliating announcement by the BoE that it would instead now pump an additional £65bn of new credit into the long end of its Gilts in order to try and contain the rise in rates, the ECB had already been embarking on a similar volt-face. In the last week of data to the 30 Sept, the ECB had expanded its balance sheet by almost €33bn, taking the monthly total to around +€60bn; something easy to miss. 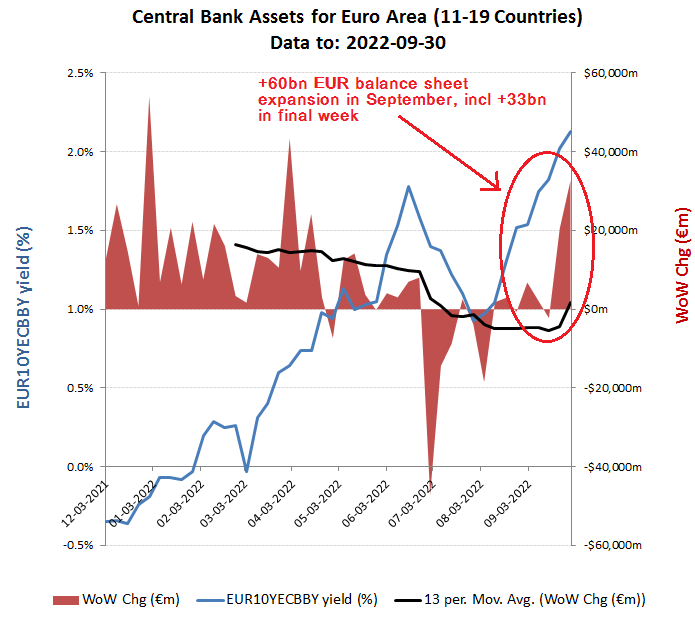 Back to the printing press!

Throw this sort of cash into bond markets and yields will react to both the weight of new demand together with the message that this will also offer to traders.  All this however, will be transitory should the US Fed continues to tighten and offer greater protection against debasement. Indeed, the wanton disregard for honest financing by European central banks will only further undermine confidence in their funny money, which in turn will require either higher rates to compensate or for the return of exchange controls as funds continue to gravitate into the USD.  Enjoy the Euro bond rally, as it will run out as fast as the ECB’s capacity to keep printing against what promises to be a further downward leg (and possibly a spiral) in exchange rates. 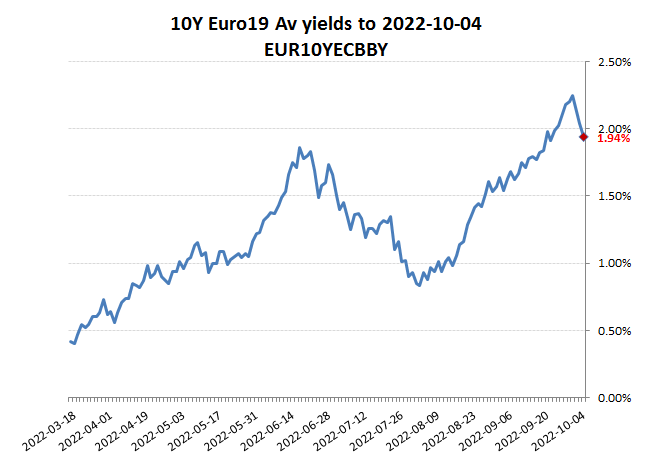 For the UK, last week’s ‘big bazooka’ announcement has blunted the spike in bond yields, although without the support of currency markets to this effective debasement, this may prove short lived. 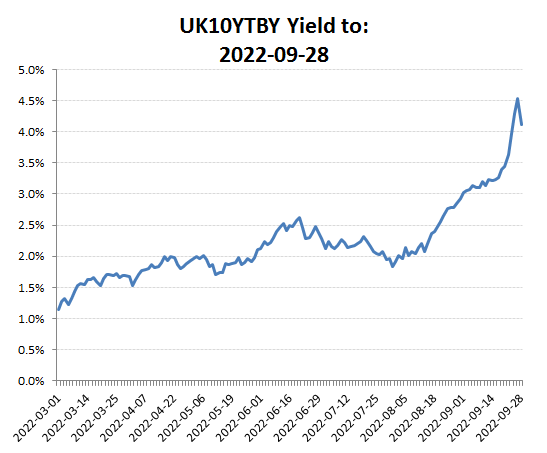 Let’s see what the BoE’s £65bn of ‘interventions’ do

As always, the key remains US Fed policy, but here the need to defend the USD reserve status and the considerably lower overhang of Central Bank assets relative to domestic GDP (see section marginal buyer), together with its natural advantages and a possible early reversal of economic policy depending on the forthcoming November mid-terms, means that it is further up the catastrophe curve in being able to make these changes. 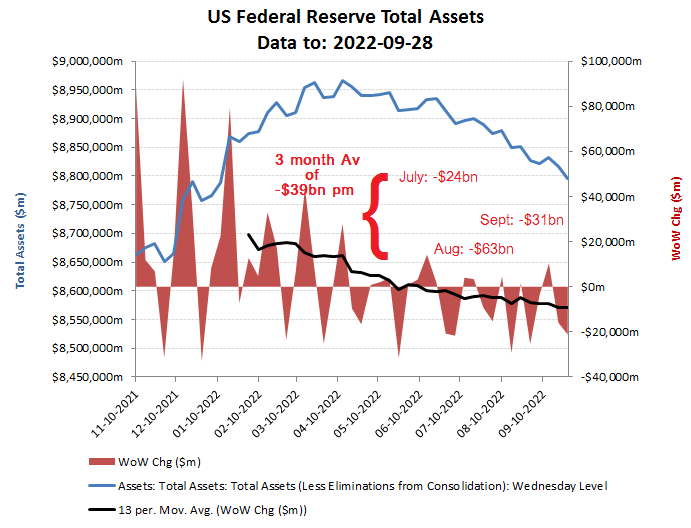 US Fed however, remains in tightening mode

But, but, but surely this additional whiff of QE is working I may hear you say. Look at how stable 10 year Govt bond yields between Europe and the US, you might opine. Having worked for the last 15 years, surely more QE is the solution again, the siren calls. 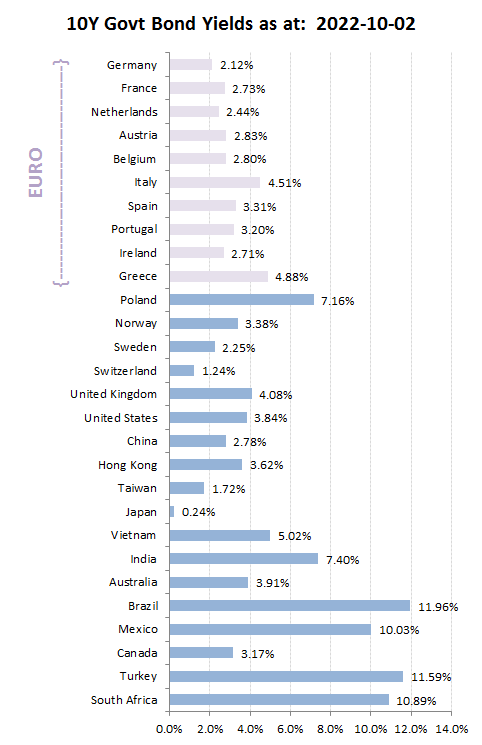 When the US Fed was playing the game and reported inflation was low, this may have been the case, but no longer, with the inflation genie out of the bottle and the US Fed tightening.  If short term pain is being eased on bond yields, this fails to account for what is lost on the other part of the investor’s equation, that being in currency losses. Europe may artificially depress initial interest rates, but this is doomed to failure once reserves are frittered away and the devaluation in currency rates from the monetary merely exacerbates inflation and economic collapse into a negative feedback loop that ultimately ends in hyperinflation and Weimar. 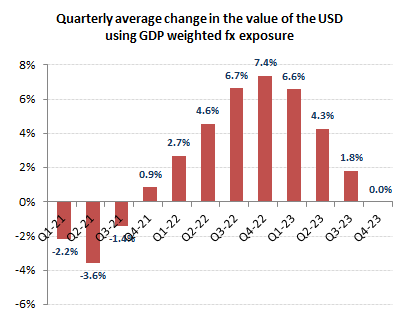 The march of the USD

So looking at the quarterly average change in the USD versus Europe, whose bonds have performed best. Either government compete for debt in  a market priced by supply/demand of investors, or you have a command economy. The US is still heading towards the former, but Europe is taking the opposite route. That route however, is one where the only buyer of debt is the government and with printed funny money. Do that and the currency collapse will merely accelerate, which in turn will lead inevitably to exchange controls and confiscation.