Never in human history have governments spent so much and coerced so many in the name of health, yet achieved such adverse results.  In year three of a virus with a lower mortality risk than for seasonal flu to all but the fat, old and already sick, not only are more people now dying, but also more of the young and healthy, and it’s not from Covid. Not only is this counter-intuitive to simple folk such as myself, but this explosion in all cause mortality has wrong-footed the life insurance industry with not only an over 1 in 200 year event, but one which appears will be ongoing. The life industry’s loss however, is the death industry’s gain, as perhaps clearly exemplified by the diverging stock price performances of two of its leading participants, Lincoln National inc which collects premiums from the living and Service Corp which looks after the bodies should their policyholders end up dying. 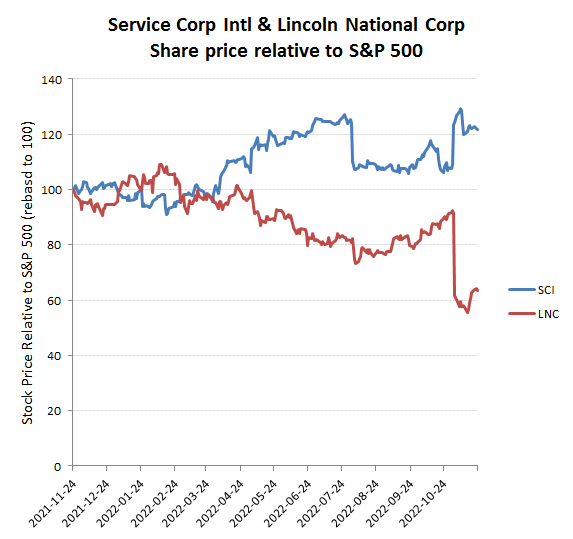 Quibble if you may over the causes, but there can be less dispute over the soaring increases in excess mortality from mid 2021 and which have been sustained into 2022.  From a stock perspective, it may be pertinent to highlight that major US Life insurers have been reporting excess mortality in their company life policies since Q3 FY21 and which were being reported in the associated fiscal quarterly reports at the end of 2021 and into early 2022. These included OneAmerica CEO Scott Davison, reported “Indianapolis Insurance executive says death rates among working-age people up 40 percent” and then later confirmed by  actuary associations, such as the Society of Actuaries Research Institute.  Of particular interest was their “Group Life COVID-19 Mortality Survey Report” which covered up to Q1 2022 and was published in Aug 2022 with its worrying spike in non-covid excess mortality in its under 45 year old age group.  For those choosing to ascribe causality to global warming, or perhaps alien abduction following the solstice, as excess mortality rates seemed to ease off into Q1 2022 however, may have been pre-emptive. By Q3 FY22 results from groups such as Lincoln together with overseas official mortality data and actuarial association reports suggest an ongoing problem with excess mortality.

For Lincoln, Q3 2022 saw a collapse in its core life business as this division reversed from an operating profit of approx $100m per quarter to a loss of almost -$3bn. 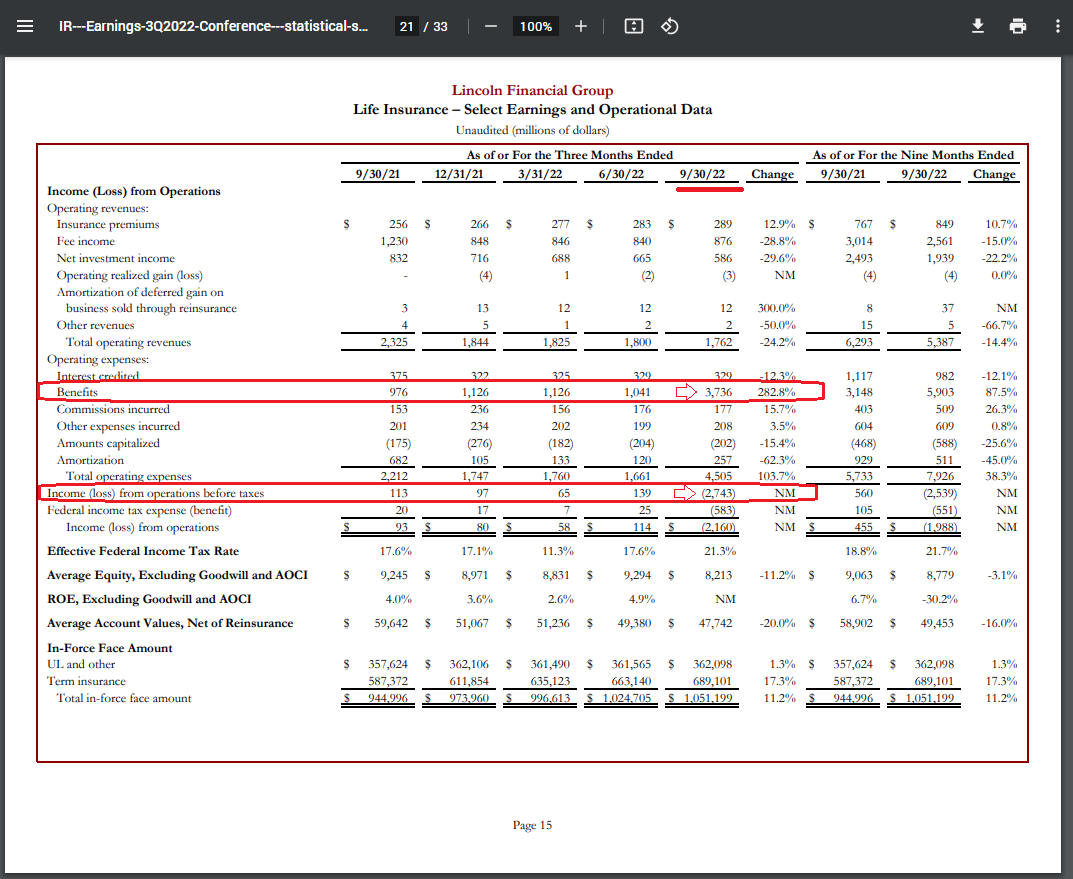 While the increase in benefit liabilities was not entirely due to mortality/morbidity and included a sizeable provision increase for changes in policyholder behaviour, this was in part influenced by changing excess mortality expectations, both by policyholder and insurer. 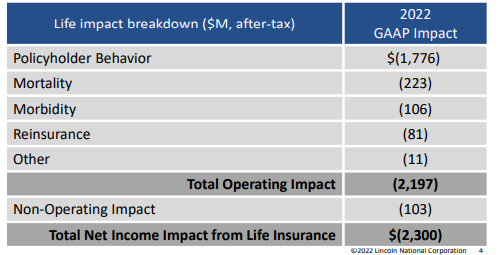 Looking for further evidence of rising excess mortality meanwhile, one doesn’t have too far to go 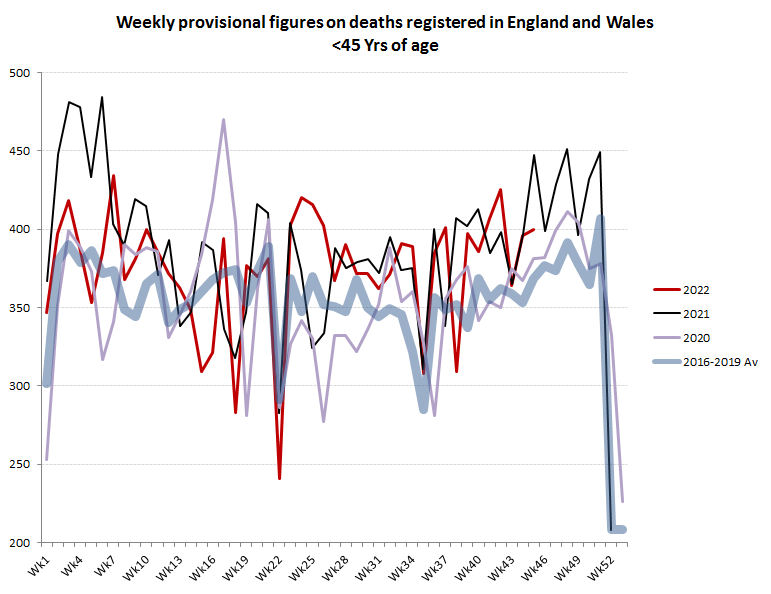 Putting that into perspective, one might consider these rates of excess mortality against what has hitherto been a relatively stable rate of mortality. For England & Wales, the average annual rate of mortality averaged 0.84% of the population from 2001 to 2021, fell within a range of 0.82-0.87% on a margin of error of just 0.03% (or +/- 3.25%) and this included 2020 & 2021. That margin of error in annual mortality of +/- 3.25% therefore needs to be put into context of an excess mortality rate into 2022 of between +10-15%. With that sort of Sigma rate, it’s perhaps not surprising to seen life insurers being caught short, but more worrying will be the deafening silence by all and sundry in identifying these incidences of ‘died suddenly’ as being no more than ’cause unknown’. 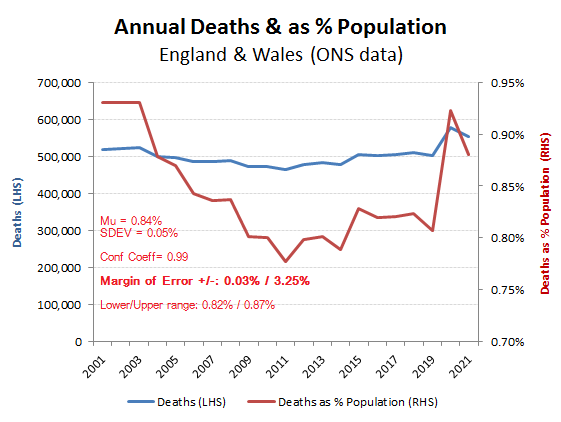 Meanwhile, elsewhere in the World, we are seeing the same narrative of this mysterious rise in excess mortality rates. 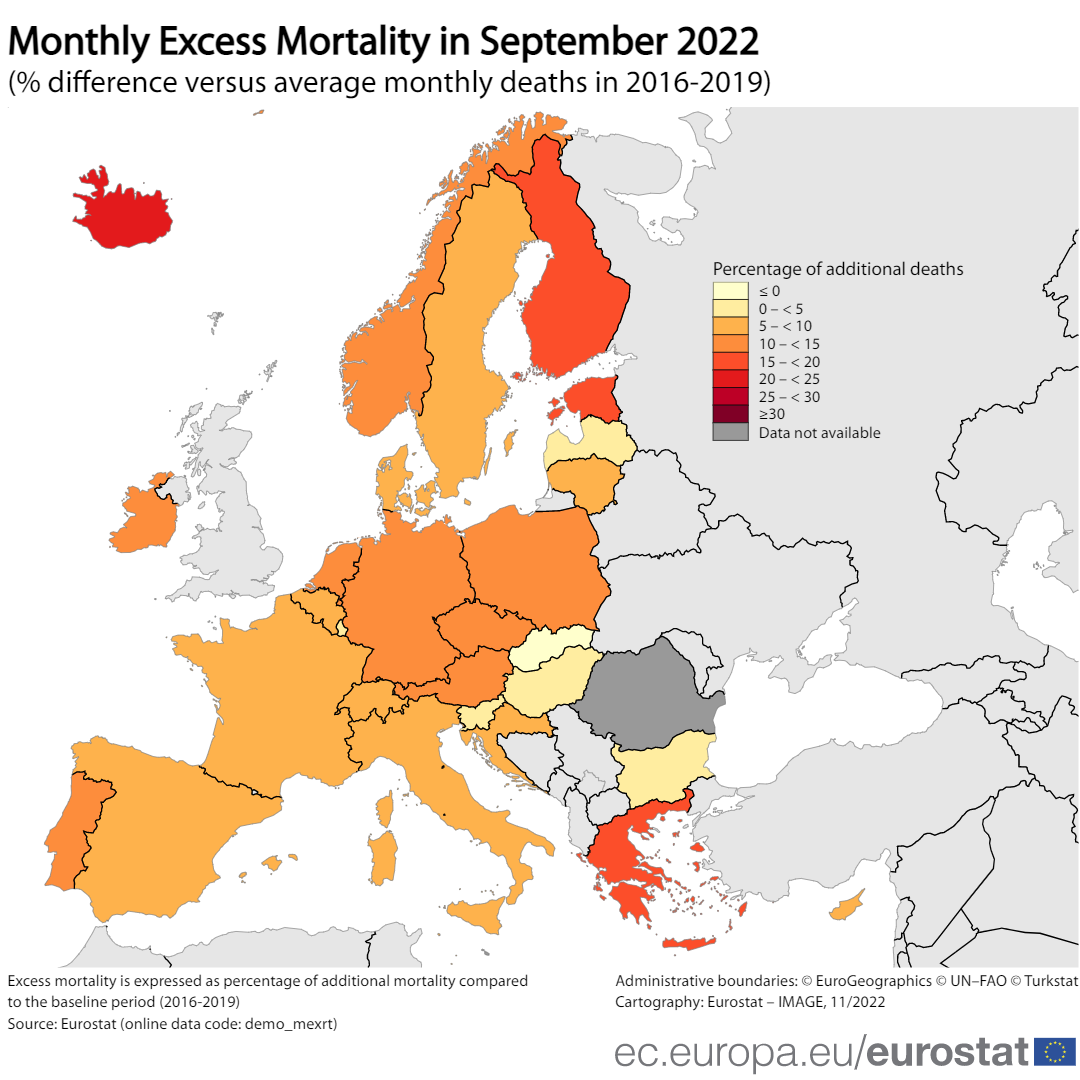 While not quite up to matching Goldman’s CFO’s (David Viniar) 2007 claim that “We were seeing things that were 25-standard deviation events, several days in a row” to excuse being caught out by the sub-prime mortgage debacle, the current and extended increased Sigma on excess mortality that is impacting life insurers is perhaps more representative, And unlike in 2007-08, these problems were not of the Life Insurers making!