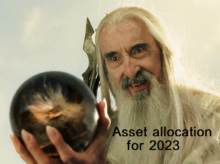 Go into a car salesroom or estate agent (realtor) and ask if it’s a good time to buy and I think we all know what the answer would be. Why then should we be surprised at a similar response from those pushing ‘stawks’ and bonds for a living? Here, the year-end prognostications for 2023 from sell-side banks offer an almost universal consensus of an early peaking in inflation and interest rates to support the resumption of the asset bubble by central banks as the feared recession proves short and shallow. For those of us with more than a few recessions under our belts however, we might recognise the marketing narrative being pushed here and perhaps take greater heed of the considerably more cautious appraisal of the outlook from some of the big buy-side investors instead.

Unfortunately, investing (and asset allocation) can often feel like a house of cards, with outcomes heavily dependent on both the adopted macro economic scenario unfolding as expected and how markets will end up responding to this. When stepping back a little from the current debate, one can perhaps identify the two main opposing scenarios currently on offer and the myriad of positions in between. These principally divide into the bulls, who broadly assume the current inflation and central bank tightening spike is a temporary aberration between further fiscal and monetary easing, and the bears. For the latter, we are undergoing a more fundamental paradigm shift into tighter money and weaker consumption environment, as the bill for decades of profligacy come due and the US Fed is forced to defend the US dollar and the all-important reserve currency status.

Where one sits on this debate can obviously have a very significant impact on the subsequent portfolio performance, as the below table of anticipated 5 year average annual ROI’s by asset class recently published by UBS Asset Management demonstrates, notwithstanding that the adoption of such a lengthy time frame spares them the onus of predicting how events unfold in the meantime.  From this table one can see a ‘baseline’ assumption, which if a colour for those with synaesthesia, would be beige; an understandably safe commercial position so as not to scare off investors. What they do supply however, is a helpful indication of how average returns by asset classes might diverge depending on which policy route and macro economic outcome are adopted. Will central banks return the proverbial monetary punch bowl (Goldilocks to Reflation), or instead be forced by excessive previous easing and consequential inflation to keep tightening, if not to a full return to the +2% target, to at least nearer +2.5% pa? Here, the latter outcome might skew the scenarios towards ‘Stagflation, or indeed all the way to the ‘Deep Recession’ option columns. 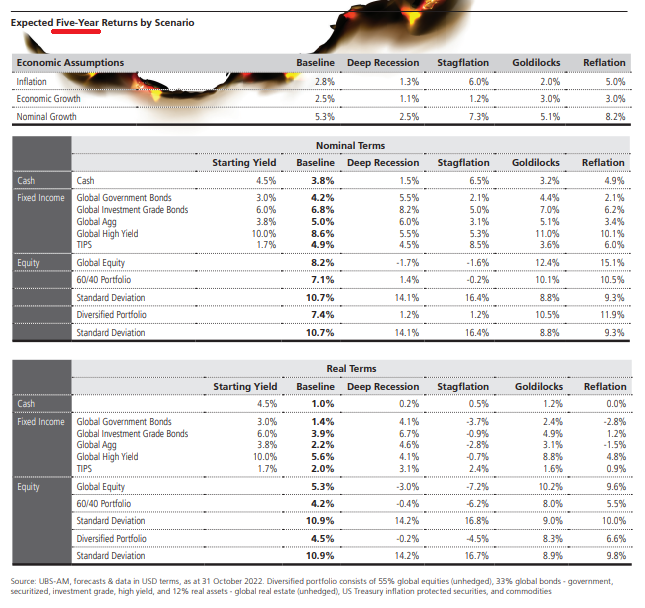 Choose your macro scenario and determine your asset allocation

As mentioned at the start of this piece, there is what ultimately happens in monetary markets and the economy and then what markets believe might happen.  What they believe may happen however, may initially just be determined by sitting on the prevailing trajectory and consensus, which after a relatively benign Q3 earnings season and Q4 guidance is encouraging expectations of more of the same for early 2023. Here, the bull case scenario includes falling natural gas prices and inflation also hastening an early end to current monetary tightening, thereby encouraging investors to shift out of cash and inflation linked bonds and into equities and particularly emerging markets. From the links below, one can see that this scenario is broadly shared by many of the key sell-side banks and even JPM, notwithstanding the the considerably bleaker outlook predicted by their boss, Jamie Dimon.

While asset prices are ultimately defined by liquidity rather than by some esoteric assumption of valuation, the US Treasury bond markets do offer a more objective perspective on this, assuming of course that the Fed has stopped its MMT manipulation of prices.  Here, I would like to highlight the implied rate of inflation currently being priced into US 10 year yields (the gap between the fixed rate and TIPS), which stands at just over 2%, or conveniently, the US Feds longer term target inflation. As an aside, the target inflation rate that even the more bearish forecaster, BlackRock, estimates it will fail to achieve. Assuming this is target inflation rate is eventually and progressively delivered by year 5 however, that would suggest an average inflation rate of around +3.7% pa over the duration of the 10 year period of the bonds.  For those such as UBS looking for a global average Govt bond ROI of +4.2% pa, that might suggest a zero real ROI are currently on offer on these US 10 year treasuries, assuming they retain a yield discount to the pack. This however compares with an historic real yield prior to the 2008 QE & MMT of over 2%.  The implication of the current market pricing of these bonds therefore is that the real yields will once again be crushed to zero, although this would only be possible with the return to unrestricted QE by the US Fed, which in turn would have clear ramifications for inflation and more importantly for the US dollar.  With over $31tn of Federal debt and having just passed a $1.7tn budget, the US Fed is perhaps the last defence for the US dollar reserve status being sustained, which in turn suggests monetary tightening will need to be sustained for longer and higher than currently being priced in by markets. To put that into perspective, a return to more normalised market pricing of capital in the absence of central bank interference combined with the likely outcome for average inflation over the next decade and the target yield for 10 year US treasuries ought therefore to be nearer 4.7-5.7% (3.7% inflation plus a real yield range of 1-2%).  Compared to the sub 4% current yield, which most sell-side assume has peaked and will now not be exceeded into 2023, this may well suggest that current forecasts are heading for a disappointment and possibly a big one! 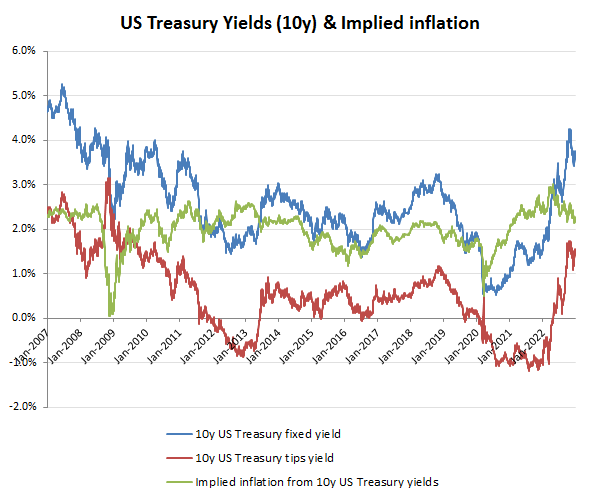 “Central bankers won’t ride to the rescue when growth slows in this new regime, contrary to what investors have come to expect. They are deliberately causing recessions by overtightening policy to try to rein in inflation. That makes recession foretold. We see central banks eventually backing off from rate hikes as the economic damage becomes reality. We expect inflation to cool but stay persistently higher than central bank targets of 2%.”

“we think long-term government bonds won’t play their traditional role as portfolio diversifiers due to persistent inflation. And we see investors demanding higher compensation for holding them as central banks tighten monetary policy at a time of record debt levels.”

“We stay overweight inflation-linked bonds on both a tactical and strategic horizon as a result.”

“Our core scenario sees developed markets falling into a mild recession in 2023 on the back of tighter financial conditions, less supportive fiscal policy in the US, geopolitical uncertainties and the loss of purchasing power for households”

“Fed “Pivot Trade” Likely to Drive 2023 Fixed Income Markets – The Fed’s pivot to a less aggressive monetary policy is likely to set the tone for the
markets in 2023. ”

“Could the coming year bring a return to a more promising market environment as global economies reset? ”

“Portfolios to anticipate opportunities y. In the US, we expect a mild recession, with regions such as the eurozone being more heavily impacted. As inflation
subsides, we see the US Federal Reserve pivoting from interest rate hikes to cuts and markets shifting focus to 2024 recovery, unlocking more potential opportunities for investors.”