That favourite pastime for markets has been to try and anticipate the Fed’s next move, which to be fair, has been the defining equity investment strategy for over a decade and a half.  That however, presupposes that it remains in charge of events rather than now increasingly being at the mercy of them. So while traders leverage back into this rally on the hopes the Fed will once again take the easy option on rates, they may well be under-estimating the extent to which the US can keep goosing demand for the USD as a supposedly ‘safe haven’ currency from the chaos engendered by its own foreign policies. Just like his predecessor Arthur Burns, Jerome Powell clearly is baulking at purging the monetary excesses that his own institution has been so complicit in creating in the first place. For market traders, that must seem like a positive, but just as in the late 1970’s this is becoming irrelevant as inflation ends the money printing, while the scale of the fiscal hubris forces the government/Fed to compete for capital against a backdrop of deteriorating economic ratios. 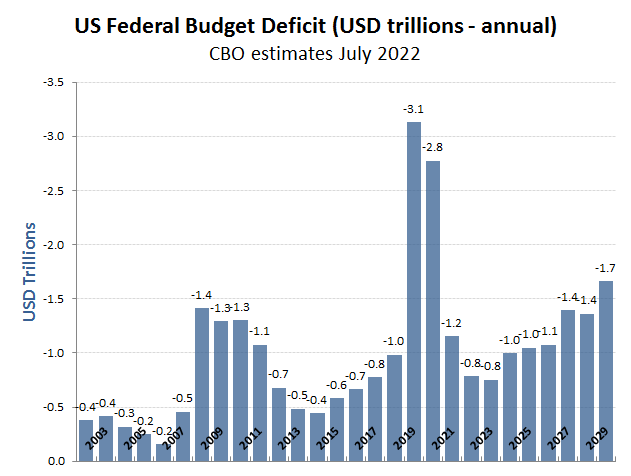 And boy, do they need the cash! The recent (July) CBO forecasts for the US budget deficit and its rising proportion to GDP (from 3.9% in 2022 to an estimated 11% by 2052!) are truly terrifying (as perhaps are meant to be) and can also be found in its The 2022 Long-Term Budget Outlook which is worth a read for those with a strong constitution. 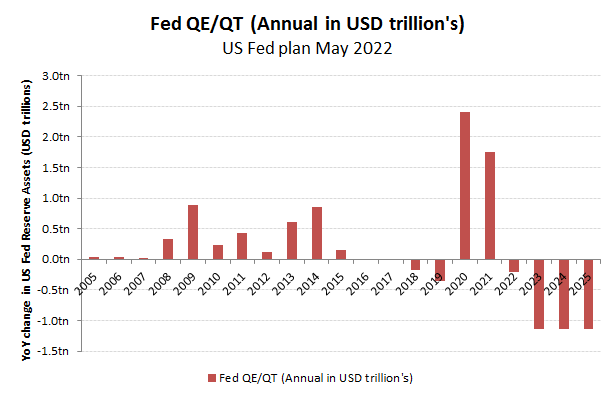 Clearly printing ones way out of debt with such dire economic numbers is out of the question unless you want a currency crisis and even Jerome Powell can see this, hence his attempts to stabilise confidence in the USD back in May, when he revealed his plan to start shrinking the Feds balance sheet by $45.5bn per month from June to September, where the monthly contraction would increase to $95bn per month. All very laudable and no doubt has also helped attract cash into the USD and therefore also into Treasuries. 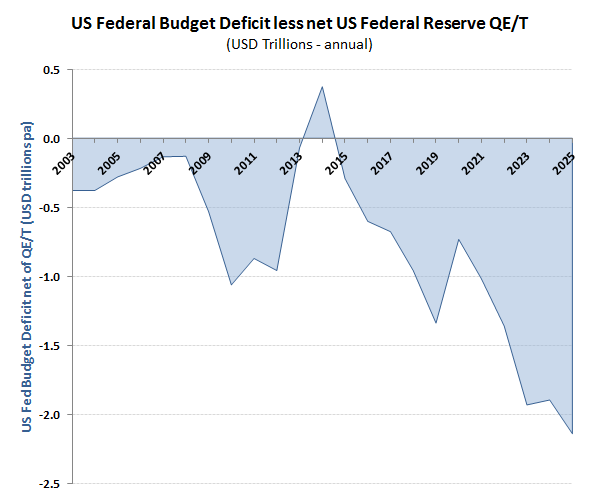 The combination of a persistent budget deficit together with a shrinking central bank balance sheet is yet more debt will have to be sold. By that I mean possibly $2 trillion a year. Don’t forget, that every other major economy is experiencing similar dynamics, which means more borrowers chasing tightening liquidity. So regardless of where central banks such as the Fed want to communicate their interest rate aspirations, bonds yields will reflect the simple laws of supply and demand. That means bond yields are going up a lot more than markets are currently anticipating, particularly the more the Fed tries to do an ‘Arthur Burns.