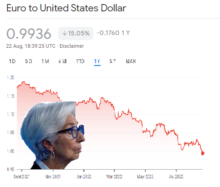 No, I’m not referring to Qanon, but to the US Federal Reserve. Those central banks out there who thought they could get a free ride behind the Fed’s excessive monetary easing for a decade and a half, are now discovering that it came with a price, when the Fed started to pull back some of that liquidity. Once again, the US is exporting the worst of its cyclical  financial purges on its counter-parties, from the usual casualties amongst the emerging markets, with the same old appreciating USD debt liabilities, to that new kid on the block, the Euro.

Although just another number, today the USD-EUR broke below that psychological barrier of 1:1. The last time the Euro was worth less than a US dollar was in the couple of years between 2000-2002. Notwithstanding the mess that the current US administration is making of its finances, the EU is doing even worse, whether it be on its zero everything agendas and associated energy cost inflation/shortages, to its structural deficiencies inherent on the half formed federal monstrosity it has become.  By that I mean in particular its mountain of debt liabilities funded by debt monetisation from a central bank and commission without any direct tax raising powers to service it. In between a debt monetisation that has seen the ECB balance sheet expand to over twice the level of that of the US Federal Reserve, relative to GDP, this ‘big bazooka’ from the days of Mario Draghi at the ECB has been used to artificially support weak members such as Italy and Spain by indirectly buying in their government debt, thereby supporting what have long ago become structural deficits. The problem here however, is that all this is built on a lie. That is, telling the Germans that it is not a transfer union, when it clearly is. Perhaps someone ought to have told them that the cars which they were selling into these markets were paid for with German cash, which of course may well never get paid back. With all those Germans in Argentina, you might have thought they would have been wise to this game by now! 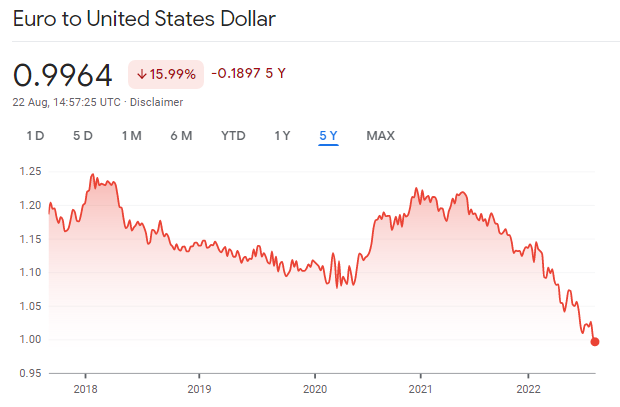 Maybe it’s an age thing, as most market traders will never have lived through the inflationary crises of the mid 1970’s to early 1980’s and where this recent currency debasement with its fancy acronym of MMT (magic money tree?) ultimately leads, including the associated costs to purge it from the system. While it remains unclear whether Jerome Powell is about to repeat the mistakes of Arthur Burns, in thinking rate rises can be avoided, the recent weekly Fed assets reports, may suggest a more serious commitment to pruning its balance sheet. After an admittedly slow start, it seems that in August, the Fed might finally be getting on track, with the first three weeks in August (to the 17th) showing a net reduction so far of -$40bn. Although still a long way from the -$95bn per month promised from September, this seems to have been enough to encourage the USD bulls to restore US treasury yields back above 3%, while no doubt spooking every other central banker out there with even higher debts, deficits and balance sheet assets out there to prune. 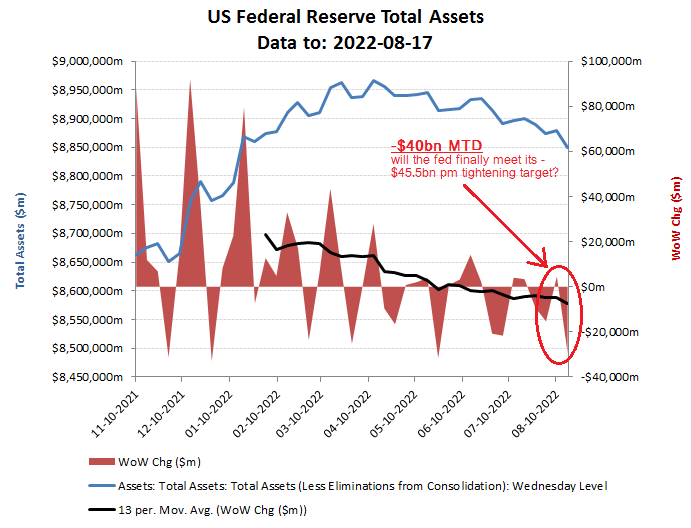 Where we go one (the Fed), we go all (it seems), particularly for the ECB, which has been quietly trimming its bloated balance sheet.  This however, presents the ECB with a specific dilemma in that without its largesse to cover Italian and Spanish government debt/bond sales with new Euro funny money, these governments will face a liquidity crisis to again expose their structural insolvency. Initially, Christine Lagarde proposed to recycle the ECB’s existing bond portfolio out of German bunds into the dodgey stuff from their southern neighbours. Unfortunately, this is an even more blatant breach of the EU treaties and a clear monetary transfer. So much for it not being a transfer union! Ms Lagarde however, seems fully away of the potential legal push-back from the Germans, but with the need to defend the Euro, she also needs to at pretend to match the US Fed on monetary tightening. This would seem to put the EU between a rock and a hard place, particularly given its self-inflicted wounds from Covid restrictions, net zero climate agendas and of course Russian sanctions and the prospect of a long cold and possibly dark winter.  So without the prospect of ECB monetary support, but facing rising inflation and global yields and a struggling economy, where might Italian and Spanish (let alone Greek) government bond yield rise to, if left to markets to decide for once? Well perhaps investors should look back to what happened the last time in 2012, to get a measure. 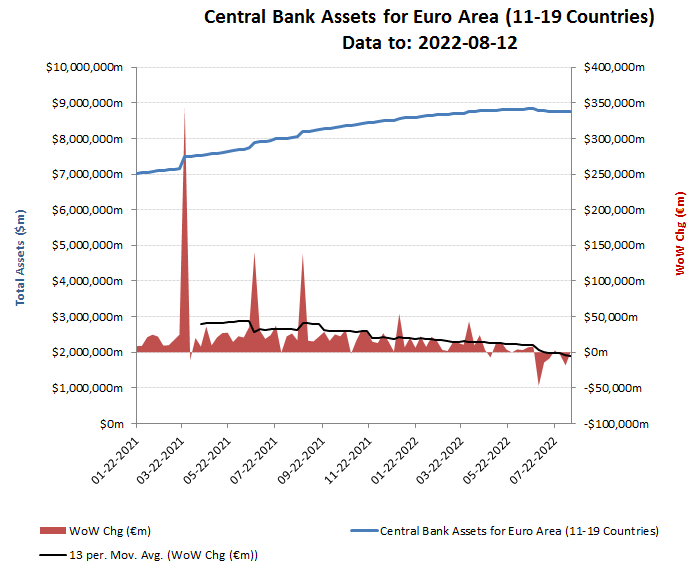 Which means other central banks, incl the ECB, have to follow

The initial enthusiasm, that this would be a short-lived spike in inflation and interest rates seems to be already waning.  The ECB, it seems has a choice. It can restart the money printing and debt monetisation to equalise and suppress borrowing costs around the EURO19 countries, but against a US that is normalising and tightening, this will lead to debasement as that liquidity will flow naturally into better yielding prospects. That road of increasing central planning leads either to hyper-inflation or at least exchange controls and all that will go with it.  Allowing rates across its members to find their own level based on their relative growth and risk elements however, would destroy what little cohesion remains with this currency experiment, as many southern members potentially default.

In such an environment, the blended average 10Y Euro bond yield creeping back above 1% is a joke and utterly fails to discount either the underlying risk to the entire Euro edifice, or even the broader inflation and real yield outlook. Even if the EU could morph itself into its sought after federal transfer union and become the United States of Europe, would it really offer better growth prospects than the entrepreneurial US, which by then may have returned to a less oppressive ‘smaller government’, unlike the EUSSR?  So with lower growth, more regulation, more tax, more debt and a more unstable political/economic union, one might reasonably argue for average Euro yields to be at, or higher than their US counter-parts; absent exchange controls naturally!

So where might US 10 year treasury yields end up? Currently they are nudging above 3%, which helps explains why global investors are more eager to lend to the US government, particularly should the mid-terms restore some much needed fiscal sanity into the equation.  But these are just current rates, rather than were they may end up at.

There are two components to this, inflation expectations and real yields which can priced separately

For those capable of breaking the recency bias conditioning, that means it would be quite reasonable to expect US 10 year treasury yields to rise to between 5.2% to 6.2%.

What happens to Euro19 yields (should it survive) in this scenario would be interesting to witness. Presumably, by then there won’t be an Italy or Spain to issue debt, otherwise the rates would probably be in double digits, with their economies bust. 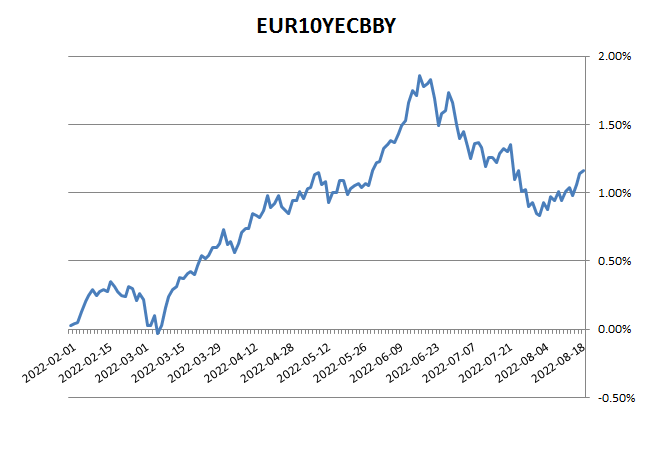 Which puts upward pressure on yields

Watching the individual yields across the various Euro government bonds provides a window on the ongoing stresses on the ECB’s ability to maintain the illusion of solvency. If the ECB can’t print because of the tightening Fed, it has to accept rates rising to where markets set them, but if it also can’t stabilise rates across its members, it may them quickly find itself with possible defaults that implode the Euro.  We therefore may well be approaching that moment of truth where the EU takes a big leap to ever closer union and to one (centrally planned) economy and associated political structures and policies as approved by the WEF. If not, then expect increasing rate divergence between the various Euro19 government bonds and further Euro currency weakness. 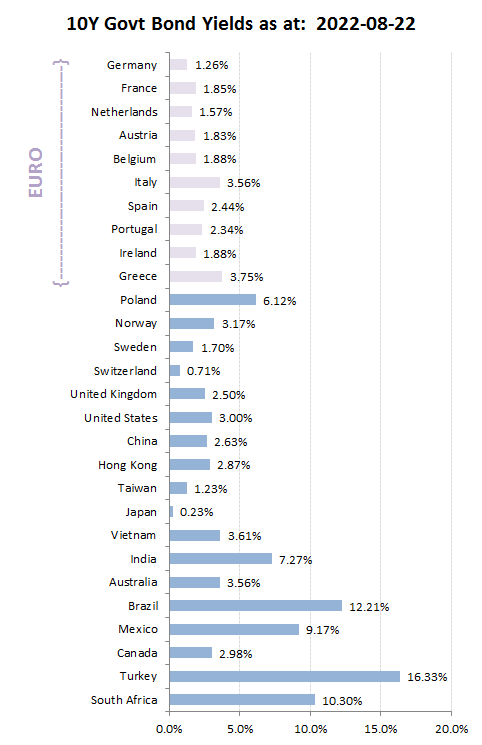 Rates edging up, but potentially much further to go