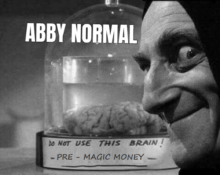 Bond yields are rising, but perhaps more importantly, they are also normalising.  Yields are rising, not because inflation rates are higher, but because of liquidity imbalances between borrowers and lenders. Where inflation fits into this process, is as a catalyst for returning the pricing of capital back to markets by removing the headroom of central banks to keep manipulating down risk and returns through monetary expansion and debt monetisation.  Remove the central bank printing contribution to worsening global deficits, as economic growth softens, and the net result is that governments need to borrow more from a shrinking investor pot, ergo more demand and less supply resulting in higher yields to restore equilibrium.

Another important consequence of this process meanwhile is that along with yields rising, the restoration of market pricing, rather than centrally planned yields, will be the normalisation of comparative yields to reflect the relative merits of each borrower.  Now this is where things promise to get particularly interesting as markets don’t seem to have fully awoken to this or the consequences, although I expect the ECB has.  On a broader perspective, say comparing the 10Y treasury yields between the US, UK and ECB (Euro19 Av.), we can see from the chart below, that yields are generally moving in unison and on an upward gradient.  As important however, is the gradual convergence in yields. If the US Fed is shrinking its balance sheet, the GBP and ECB has to follow suite or risk further currency devaluations which will only serve to aggravate their own inflation rates, deficits and ultimately raise rates, but by a more uncomfortable route. If the USD offers a more attractive currency proposition, which with the yield premium and the prospect of the Dems losing both houses in the forthcoming mid-terms, why would one accept a lower return on a weaker economic outlook over winter in Europe? As cash will flow to its own risk/return equilibrium, there is therefore no reason apart from recency bias to cling onto the assumption that the gap in rates over the MMT years won’t close. 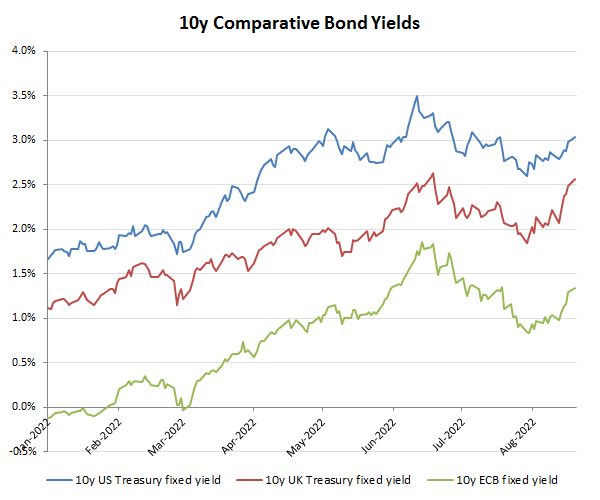 Stretch out the time-frame to get a better perspective and one can see that this current yield divergence has only coincided with the post QE period by central banks, where monetary expansion to buy in debt and thereby suppress rates was employed. This was particularly noticeable after 2012 Euro crisis, which was followed by an alphabet soup of acronyms for financial support programmes which might have distracted some that this was looking very much like monetary funding of sovereign liabilities that was supposedly barred by all the EU treaties.  But when Greek yields were heading towards 30% and Irish and Portuguese bond yields were above 10% and even Italian and Spanish yields above 7%, clearly Mario needed his big bazooka, that of course being promises of unlimited ECB liquidity to buy up the debt (albeit indirectly). My point is that this was only feasible under the aegis of an existing US Fed QE programme and therefore the subsequent yield divergences must not be treated as a secure reference point for future yields once these QE programmes cease and normal market pricing returns. 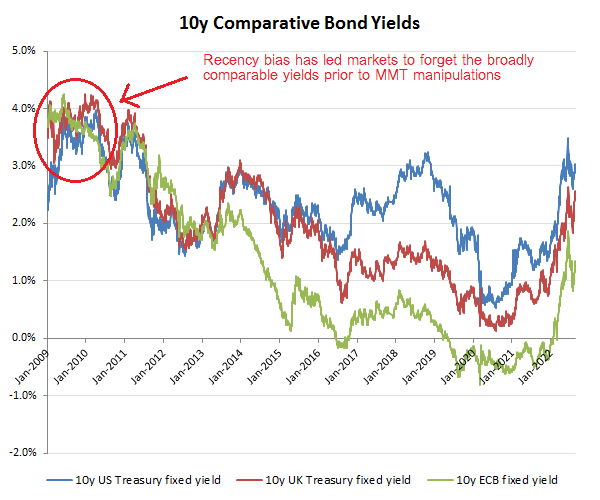 So once again, we are back to looking at individual Euro yields to gauge the emerging market pressure on yields as Europe heads into a cold and dark winter following the determination of the EU commission to pursue its ‘Zero everything’ agendas, including not just Russian gas, but crop yields by its farmers. Initially, the ECB proposed switching out of its secure bunds to support the likes of Italy as its overall balance sheet is now having to gradually shrink. This however, is clear preferential treatment of individual states in the EU, which even the partisan ECJ might find hard to find a pretext to wave through. Perhaps the EU will dump the Greta policies and follow Germany in firing up its coal power stations, or encourage Ukraine to settle to restore Russia energy supplies. If not, it promises to be a lively winter on the Euro bond markets! 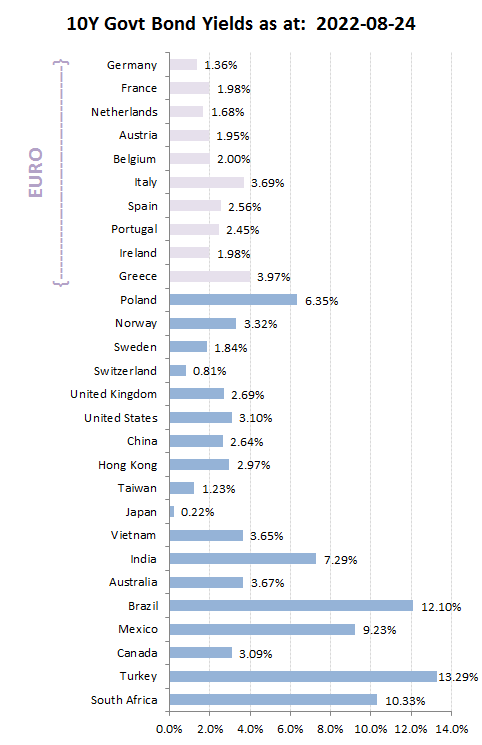