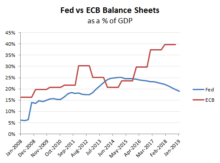 Interesting article yesterday on Bloomberg reporting that billionaire Stan Druckenmiller has dumped equities in favour of US treasuries, where he sees 10 year yields dropping to zero over the next 18 months. The two big assumptions however, is that Trump won’t get re-elected in 2020 and that US yields will converge down to those in Japan and the EU, rather than the other way around, which may well be a case of expecting the tail to wag the dog.

The premise of a Democrat win in the 2020 Presidential election however, is the pivotal one as this would be necessary to see a return to QE and the policy of endlessly attempting to defer the inevitable day of financial reckoning. That being the day when the US dollar is debased to the point it is no longer trusted as the world’s main reserve currency and when holders of US treasury bonds will understand the true meaning of a zero yield.

Instead, Trump’s war is all about re-asserting US hegemony, which entails protecting the US dollar as its most potent weapon. He can’t balance the books on his government’s budget deficit, but he can and is starting to tackle the trade deficit, while supporting domestic incomes and therefore GDP. The enemy in this war are those rival economic blocks that would threaten to supplant the US dollar; those of course being the EU (Euro) and China (Yuan). By returning to QE, the Fed would merely let its over-leveraged rivals off the hook, just when the US is screwing them with a resurgent US economy that is raising rates, but shutting the door on imports. ECB bond yields may be at zero, but this is built on sand, both politically and financially. While not widely reported, it may have missed your attention that the ECB balance sheet is now equivalent to a massive 40% of the GDP of the EU 19, which is over double the comparative level for the US Fed. If EU rates are low, it is based on a fraud. Remove this wobbly support and even the current anaemic rates of EU GDP growth would collapse.