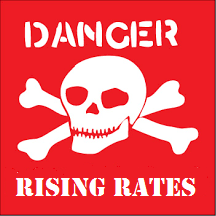 War by other means?  Forget the South China sea, Syria or Korea.  If you haven’t noticed, the EU and China are locked in a high stakes game of chicken with the US over control of the World’s reserve currency, where the weapon of choice are interest rates.

While much has been made of Trump’s attempts to rein in China with its mix of tariffs and military posturing, the yuan remains a very distant threat to US dollar hegemony. Far more appealing as an alternative to the US dollar would be the Euro, but only if it can follow through with EU plans for ultimate political unity. The EU’s increasing assertiveness is no accident, nor its admission of plans to establish its own military force, although one perhaps more relevant to suppress internal division rather than as a serious defence against the US, as Micron perhaps unwisely asserted. The EU’s primary weapon though is the ECB. It has been used to reflate economies on its southern flank with an asset expansion that has proportionally dwarfed that of the US federal reserve and on occasion, such as with the Irish, to mercilessly beat them into submission, with the mere treat of removing the liquidity backstop for their banks.

The big question for European markets therefore, is how resilient is this edifice will be when confronted by a US engineered interest rate increase that is coinciding with a global economic slowdown and rising US tariffs.  For export sensitive economies, that is going to hurt and will make the current budget conflicts with Italy a feature that could infect other economies as slowing growth increases deficits and raises rates into a painful spiral. Remember, back in 2010 during the Greece refinancing crisis that Spanish 10 year bond yields soared to over 7%, before Draghi’s “do what ever it takes” action to flout the Lisbon treaty and buy up bonds via loans to national banks. With stable GDP and 10 yr Treasury yields of over 3.1%, it’s not hard to see why liquidity would flow from Euros to US dollars and undermine the current financial repression of negative interest rates on bank deposits in some EU markets. While the EU would like to keep the party going, it is increasingly clear that the current disparity in bond yields and therefore interest rates is unsustainable. Just as falling US rates in 2009 enable other central banks, such as the ECB, to do likewise, the reverse will also apply and it is no accident that the ECB has already signalled its intention to stop QE by the year end. Much as the EU would like to portray its economic miracle in regions such as Spain, no one really has much clue as to what will be exposed when the tide goes out and rates increase. Politically, fractures will increase, not helped by possibly no more UK contributions to the EU budget, while German taxpayers will discover whether the promise that they are not in a transfer union has been about as honest as Theresa May’s red lines. 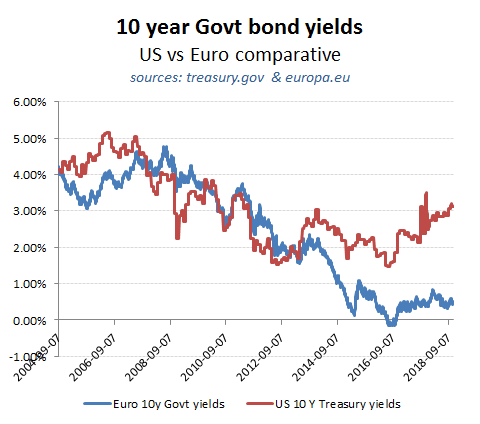 The disparity in Govt bond yields is more about the phasing of QE across both markets than a reflection of inflation rates, which currently are in the 2-2.5% range in both markets. 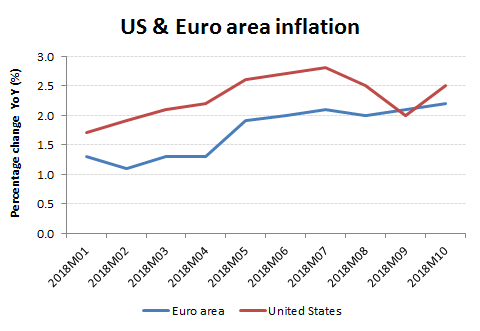 With regards the reported level of Govt debt exposure for the Euro 19 economies, it currently stands at under 90%, which is a lot better than the approx 105% comparative for the US, while the annual budget deficits for countries even such as Italy at approx 2.5% of GDP are also lower than the effective 3.5% last seen in the US. A substantial portion of this disparity however relates to the higher US funding rates rather than the manipulated and temporary Euro rates (courtesy of the ECB). The level and rate of ECB asset purchases has also be considerably greater and with a asset position at 40% of GDP, is proportionally double that of the US Fed. Will the ECB really try and unwind this as the Fed is currently doing, or will this ultimately be monetised by a currency debasement? Answers on a postcard please, but don’t be surprised if this provides another incentive to park ones Euros into US dollars, which will either drive up rates into a death spiral and or encourage more radical action whicn might even include exchange controls. Once markets start to sniff this however, it will be game over. 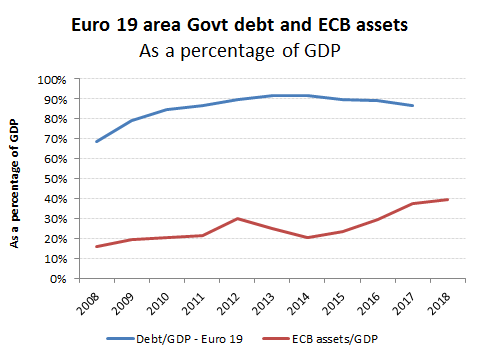