If the price of continued US support after the Khashoggi murder was the lower oil price, then it must rank as one of the  most expensive assassinations of  journalist in history, with Saudi Arabia’s gross oil production revenues down almost $2bn per week. The attempt to resurrect his political reputation at the G20 meeting was perhaps unsurprising, while his high-fiving it with Putin may have been an attempt to show the US that other ‘friends’ might be cultivated, so as to help alleviate some of the pressure on what must seem a fairly ‘crude’ shakedown. Having survived the initial crisis, MBS may now feel a little more emboldened to try and recoup some f the lost revenues and use the positive tailwind on demand expectations from the recent softening stance by the Fed on interest rates and the 90 day deferral of planned tariffs between the US and China as cover for some surreptitious tinkering with supply. With both Saudi and Russia requiring an oil price of over $80/bbl to balance budgets, the G20 high-fives seem indicative of where these two plan for oil prices to move into the new year. 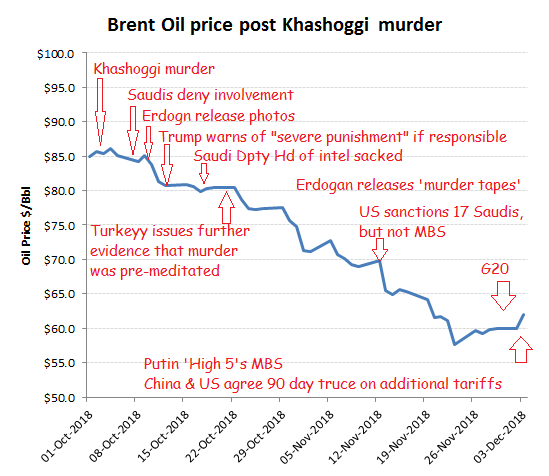 When the EIA releases its next monthly forecasts next week (11 December), it will to be seen whether its demand forecasts capture some to the improved sentiment from a softening signal by the Fed on prospective interest rate increases and the easing fears on trade as US and China postpone further tariff escalations for 90 days. The lower oil prices over November and its impact on Fracking investment however, ought to have permeated through to the EIA’s supply estimates which in turn should have helped to reduce its estimated oil production overhang. 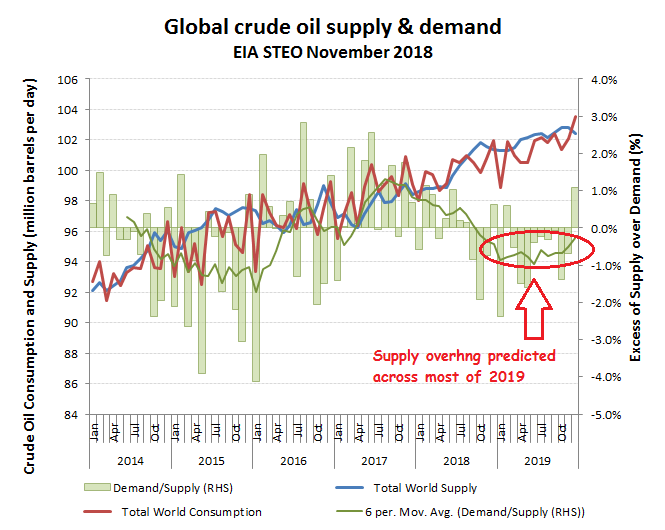 What we may be looking at therefore could be a modest bounce in oil prices after a politically motivated rise in output and therefore decline in prices. The higher unit production costs for US fracking also mean that a price at around $60/bbl is needed to keep investment flowing in to new well development and ensure further progress in moving the US towards oil neutrality.  I don’t get the sense though that markets see both Fed comment on interest rate rise phasings and easing threats on global demand from the 90 day truce on US/China tariff as much more than short term palliatives that might help underpin a ‘Santa rally’ in markets. With US monetary tightening likely to continue and drive up global rates and with the key areas of disagreement on trade between the US and China remaining unresolved, this may just be another clam before the storm.