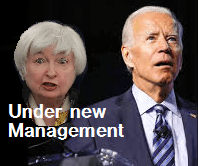 So is Good news now good for asset prices? For the last decade and particularly the last year however, its been more a case of multiple expansion driven by  central bank/Govt money printing rather than rising returns that have been responsible for this asset inflation, so why would another month of robust growth in US private sector employment be greeted with a +1.4% rise in the S&P500 index? Surely this demonstration of an economy recovering strongly out of the plandemic warrants a cautious hand on the monetary tiller by the US Federal Reserve while a Democrat administration is hell-bent on pumping further trillions of dollars of fiscal ‘stimulus’ into the economy.  So will the Fed follow the data, as Yellen used to pretend, and force the politicians to fund their party with taxation and debt in the face of rising inflationary pressures, rather than monetary debasement? If so, then we are back into 1970’s style stagflation, where rising interest rates and taxation not only squeeze market earnings, but also squeeze the valuation multiples from rising risk free returns and falling real growth prospects.

Don’t expect the vested interests  out there to warn you. ‘Buying the dip’ has been a rewarding strategy for much of the past decade, with each threat of monetary tightening resulting in the proverbial ‘hissy-fit’ by markets that preceded yet more monetary interventions and so yet more asset price recoveries, all disguised by the pretence of low inflation, while financial repression pushed investors up the risk curve, where many now sit.  The assumption that this game can go on forever though is flawed, particularly once inflation expectations break and Govts feel compelled to intervene in ever-more desperate fiscal interventions, which anyone with even a fleeting awareness of history ought to know is usually counter-productive. Governments are crap at spending your money and invariably destroy GDP growth as a consequence. Want some evidence, just look at the net GDP growth of those economies that have been resorting the QE since 2009.  If this was a stock with a record of below average ROIC and consistent value destruction from applying capital, then markets would quite correctly apply a rating discount to reflect the future value destruction from those investments. Why therefore would you not expect investors to do the same to the broader markets, when the economy is being managed on the same basis?  As in the 1970’s, it’s easy to get into a stagflation spiral, but extremely painful to extract oneself. 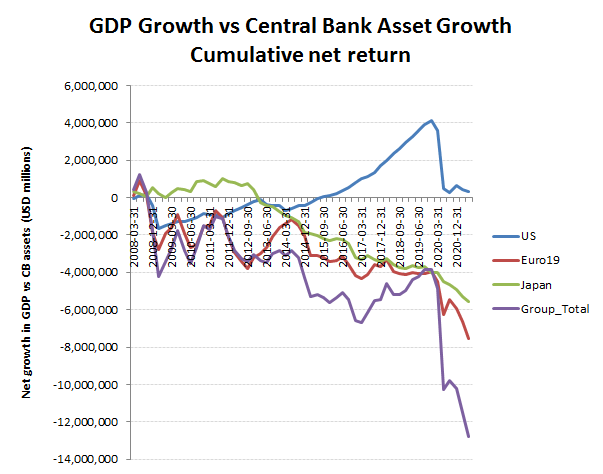 If you think markets are safe, take note of what happened to ViacomCBS a couple of weeks ago in the backwash from the Archegos default and margin calls. While perhaps not the most exciting growth story in the market, ViacomCBS could hardly be described as a penny-stock trading favourite, the stock price still managed to lose over 50% of its value. Remove the marginal buyer on margin and this is what happened, so how many more stocks out there have been supported by margin traders leveraging cheap debt and what do you think the impact of rising rates, shrinking credit availability and more margin call defaults could have?  What ViacomCBS reveals is the fragile foundations of this equity market rally, so take note, this is a market driven by momentum traders on margin rather longer therm investors. 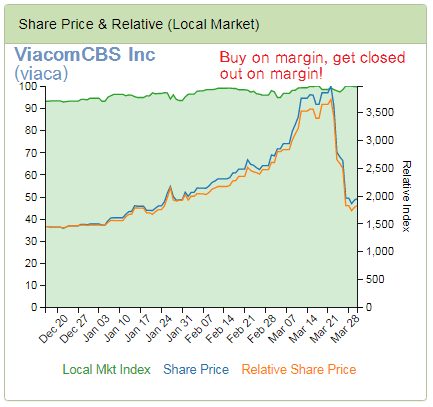 So, in case you’ve missed it, this is a central bank liquidity asset bubble 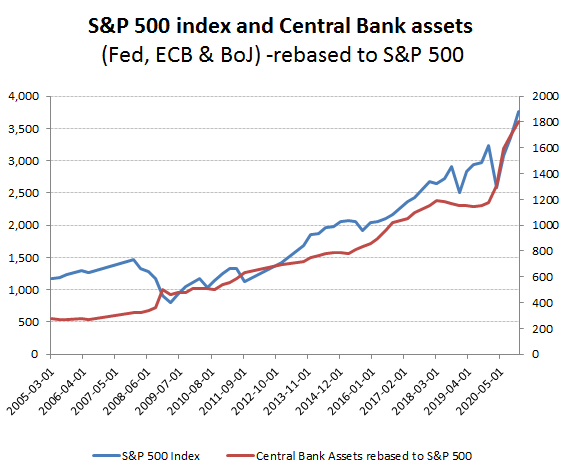 “by bringing the royal treasures to Rome in his Alexandrian triumph he made ready money so abundant, that the rate of interest fell, and the value of real estate rose greatly.”

And in case you’ve missed it, US treasury bond yields are signalling a spike in inflation expectations, which will drive up yields and should force the Feds hand in tightening monetary policy, or risk a currency crisis.  Either way, the spike up in implied inflation will be followed by a rebound in 10 year fixed yields, as seen twice already in the last decade, both in 2013 and again in 2016. On these occasions, the 10Y fixed treasury yields ended up over +50bps above the implied inflation rate, which if repeated could see yields above 3% again.  With trillions of dollars more swilling around financial markets, this could become an interesting taper tantrum. 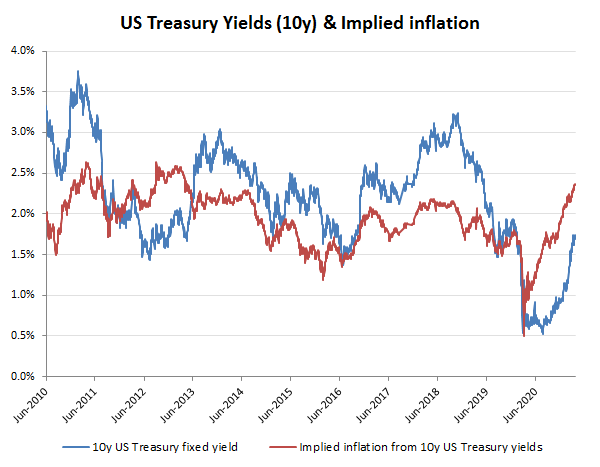 So what about those March jobs estimates from the BLS (the non-farm payrolls)?   Once again, they’ve fiddled the seasonal adjustments to reduce the reported MoM job creation, as we’ve been highlighting previously, albeit the underlying strength of the economy in GoP states, where lockdowns are being avoided, are making the suppression of this data increasingly difficult. And as we’ve reported previously, it challenges the official narrative that has been spun to justify not only the trillions of  unnecessary ‘pork’ being promoted as ‘stimulus’, but also Yellen’s attempts to justify the Fed funding this circus with endless debt monetisation. 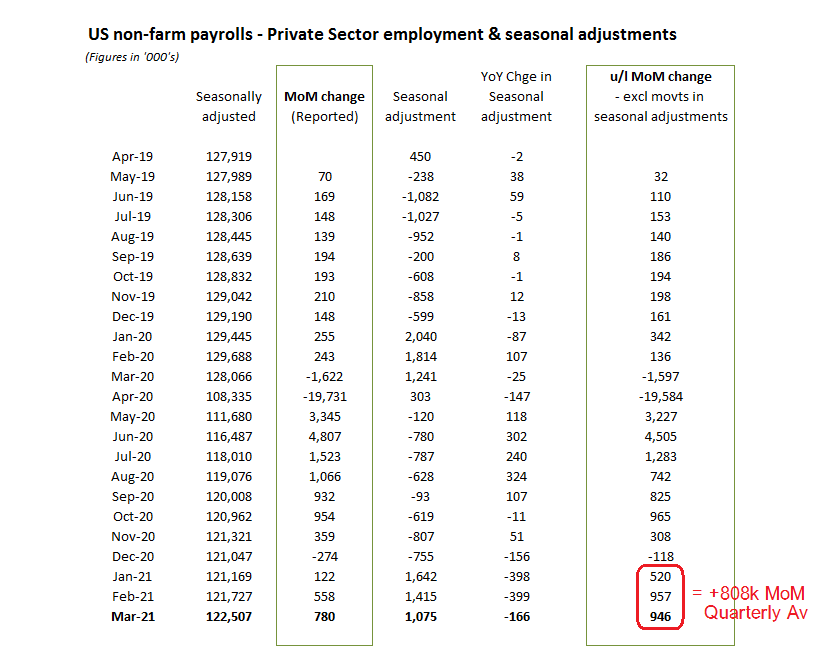 Year-on-year, private sector employment is still down by over -4%,  although importantly not incomes, which are up by +2%, including an almost +7% increase in average earnings.  At this trajectory, the US private sector will have recouped the lost jobs by the Autumn, although that was before the threat of rising taxation, minimum wages and reductions in employment protection from cheap imports and immigration.