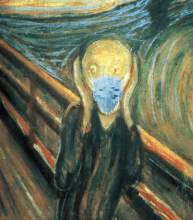 “voice or no voice, the people can always be brought to the bidding of the leaders. That is easy. All you have to do is tell them they are being attacked and denounce the pacifists for lack of patriotism and exposing the country to danger. It works the same way in any country.”

Change ‘pacifists’ for anti-lockdown libertarians and Herman Goring’s remarks to Gustave Gilbert, after Nuremberg, seem equally applicable to the current generation’s submissive acceptance of the removal of many of their personal liberties during this covid pandemic/plandemic/scamdemic.  In previous posts I have highlighted the disturbing propensity for our species to conform, as evidenced by Asch’s conformity experiments (a case of eat shit, trillions of flies can’t be wrong), together with an often irrational, if not dangerous susceptibility to authority, as also seen with the Milgram  obedience experiments. Perhaps more worrying for free societies and markets however, may be this increasing inability to tolerate risk, something that used to lie at the heart of the success of western culture and society. Indeed, western capitalist economies are (or at least used to be) based on the management and pricing of risk, hence ‘risk capital’ for equities and insurance markets. Today however, we have the arrogance to believe that we can live a risk free life; that the economic cycle can be flattened with money printing to bail out the feckless, or that hiding in a hole can protect you from diseases. Neither are true of course and it is merely dishonest to promote such an illusion. At best one is just deferring (and often increasing) problems elsewhere and onto others and at worst risk losing everything to those capable of tolerating a higher pain threshold.  There is an obvious reason why it is not recommended to concede to blackmail/terrorists. Destroy your economy and society for one pathogen however, and you’ll be at the mercy of every subsequent one.

One might have thought all of the above would have been understood by Western Governments, but unfortunately not, where taking the line of least resistance and deferring issues has become the norm, rather than actually resolving the underlying problems. Need more growth, then push out more cheap debt.  Find yourself with a solvency crisis from all that debt, then drop rates and pump out even more liquidity and when  markets start to wise up and threaten to crash your fiat currency and take your toys away, then engineer a crisis  (war or pandemic will do) to justify a reset, then rinse and repeat.

Do you really believe lockdowns are to protect us from dying of Covid? Yes, a virus with not only a very modest lethality of perhaps only 0.2% IFR, but one which predominantly targets the old and sick, rather than the young and productive.  Instead of allowing the latter to establish herd immunity, while focusing protection on the former, Governments in their wisdom have failed in both, by ignoring therapeutics in the rush for vaccines (for which Emergency Use Authorisation (EUA) would not be permitted if there were effective alternative treatments). Indeed, current evidence suggests these attempts have merely contributed to the emergence of  potential super pathogens, while mask wearing may actually increase the risk of bacterial pneumonia. Only last year, the BMJ published a warning about the hazards of “re-breathing moist mucus secretions from the upper airways soaked within the material” which can act as “an effective culture medium for bacterial pathogens” – ie such as bacterial pneumonia.

“This is directly relevant to the question of home-made cloth face masks. There is a potential for bacterial pathogens to grow in moist mucus soaked within the material, this could adversely alter the upper respiratory tract flora. Inhalation of bacteria and viruses directly into the lung in patients incubating Covid 19 could then risk synergistic interaction and a rapid deterioration in the patient’s condition”

For those wishing to cite the Spanish Flu epidemic of 1918-19, ought to be aware (and confirmed by the NIH) that most of the fatalities resulted from subsequent bacterial pneumonia, rather than from the virus.  Whether it’s this or the increasing mountain of data suggesting the efficacy of a targeted approach to protect the vulnerable (as in Florida vs NY), rather than house arrest for the healthy, then none of this makes sense.

It was therefore of great interest to listen to former UK Supreme Court Judge Jonathan Sumption reveal that the current fetish for lockdowns is at complete odds with over ten years of scientific study and planning across most Western societies.  Here the science was clear – don’t do it, so why has all this now been thrown out of the window? Has anyone seen a cost-benefit analysis done by any of these governments? When  the UK Parliament signed over dictatorial powers to the executive, did they insist on a scientific justification, or when the US Congress passed its $1.9 trillion of pork dressed up as stimulus, did they?  –  NO.   Or when they attempt to coerce vaccination of healthy children, including with vaccination passport (“Papieren Bitte!”) with often experimental vaccines that have only been approved under emergency rules and where the suppliers are legally exempted from liability, are you aware of the cost/benefit for them? – No, again.

In the below clip from his interview with Andrew Neil on Spectator TV (which I would strongly urge you to watch in full, if you have time – YouTube link), Jonathan Sumption exposes the truth about the previous scientific guidance on responding to a pandemic and as with him, one ought to also pose serious questions as to why governments are in apparent co-ordination on what was previously regarded as a counter-productive policy of lockdowns.  To claim it is merely bending to the will of  frightened public would be patently disingenuous from a government that has been largely responsible for stoking this fear up itself.

A decade of scientific planning suddeny get dumped - why?
Sumption 17 March 2021