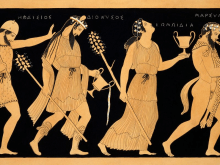 “By My word and for the good of the state, The bearer has done what has been done.”   Has WuFlu returned us to a fictional 17th century where any excess is permissible “for the good of the state”, but where accountability is as nebulous as the infamous ‘Carte Banche’?  Looking at the unmitigated project fear currently being waged by rulers against the ruled and the almost complete absence of a transparent cost/benefit analysis, while personal freedoms and financial rights are being trampled over, one has to wonder!  “Covid” unfortunately has become the modern ‘carte blanche’. Just mention it and all debate must be silenced, and where the retort of  “it is the science” is expected to end rather than open any rational discussion.  As such, the politics of Covid has also infected the trust in official statistics and where the desired narrative determines the methodology and selection of supporting data or “facts”.

One such example would be last week’s BLS non-farm payrolls. These seem to confirm the US is on there verge of slipping back into recession, with private sector employment only ahead by +6k MoM, on a base already down by over -100k in December. Forget the trillions of dollars already printed by the Fed over the last year to fund the previous stimulus checks, clearly the new Treasury Secretary, Yellen will be pressuring her old shop, the Fed, to keep the money taps turned up to maximum.  Low growth surely equals limited pressure on inflation, while the other Fed mandate to keep unemployment rates down would therefore also seem to support the argument. 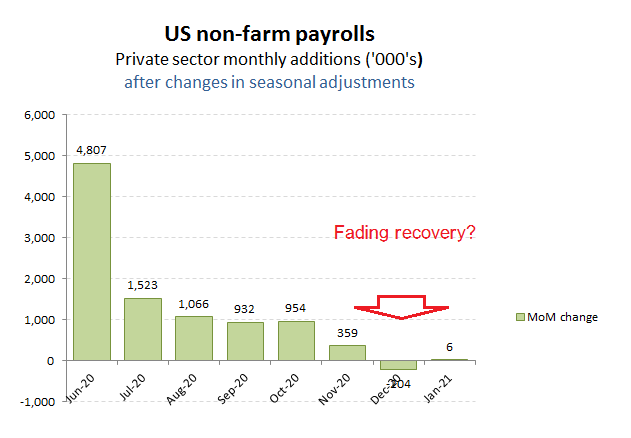 The narrative you’re being fed

And guess what, December’s spike in average wages has partially reversed in January, so surely it’ll be all systems go for the Fed doing “whatever it takes” to save the day? 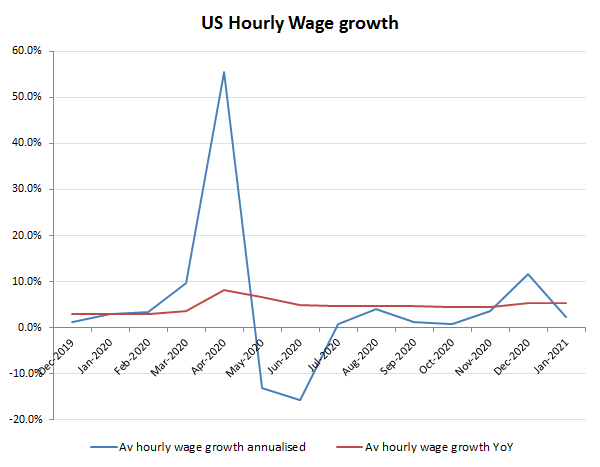 Well, perhaps not, because as Disraeli was attributed to have observed,  that there “are lies damn lies and statistics”, or in this case the worst sort, Government statistics!  While air travel remains suspended as does many parts of the leisure and hospitality sector, those covering the Q4 company reporting season may have observed that the season has been broadly beating expectations, particularly amongst the Tech giants such as Amazon, Alphabet and Facebook, which have more than offset the continued hit to the Oil majors.

So is their a disconnect between what’s coming out of Wall Street and Main Street, as perhaps the employment numbers are just anticipating what’s coming down the pipe?

More likely, it just reflects the fact that the BLS has been back to its old tricks of massaging the reported employment numbers by a liberal application of leaning on its ‘seasonal adjustments’, which for January cut almost 450k from the monthly job figures!  Excluding the change in the months seasonal adjustment therefore and the US would have been announcing +455k of net new private sector jobs in January, rather than the +6k headline number populating the official narrative.

Now why might this be occurring I hear you say? Well, as already mentioned, a weak jobs number helps the Biden administration to strong-arm the Fed in monetary financing its $1.9tn ‘stimulus’ package and whatever other dodgy spending programmes will follow. As for the BLS, it helps them off the hook from having bumped up the reported job numbers under Trump over the summer, which also conveniently helped his narrative of an early US economic revival under his stewardship.  Outrageous perhaps, but this is politics and not a particularly clean version at that. 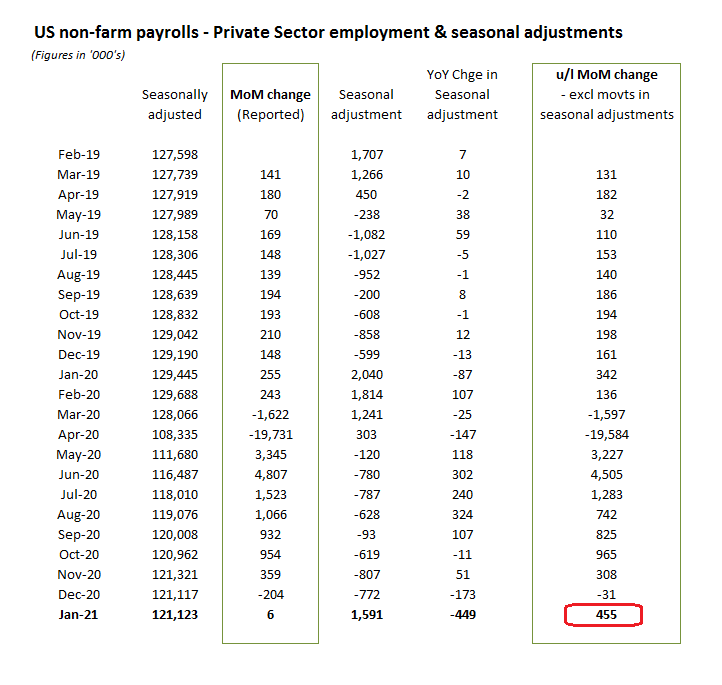 A sleight (of hand) problem?

Of course, one data point doesn’t make a trend, but when the weekly unemployment insurance claims is suggesting a reduction of around -195k per week in overall cllaims across the first three weeks of January (the most recent data), then it is fairly safe to assume that the pre-adjusted BLS monthly estimates are probably going to be the more reliable indicator of the real underlying trend. IE, the economy remains surprisingly resilient (perhaps all those Red states that have come off lockdowns) and is by no means as bleak as being portrayed by the new administration. 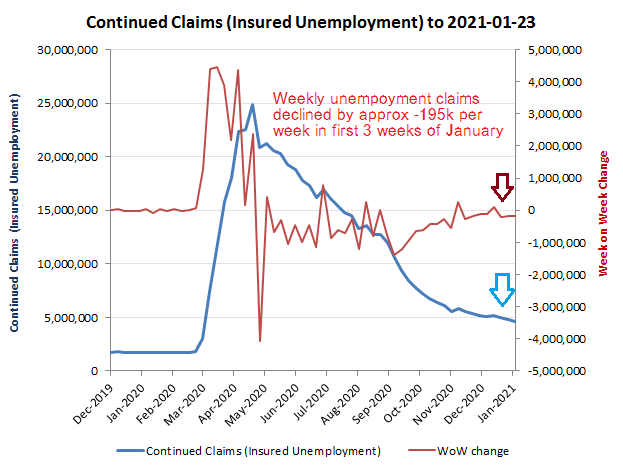 That of course leads us to the proverbial elephant in the room, that being whether this whole game is closing out.  Those following the news will have heard Yellen’s comments about targeting full employment, may well see this as heralding a highly accommodating fiscal and monetary policy, at least from the Treasury department. While seemingly going beyond the 1977 mandate from Congress for the Fed to “promote effectively the goals of maximum employment”, one ought not to forget however, the areas where a central bank can be more effective and that is in securing “stable prices, and moderate long term interest rates”.  The Democrats may want to spend a lot of money, but the issue for markets is how this will be funded.  At present, soaring valuations of financial assets suggests markets are assuming more of the same; that being monetary financing. That however, is to ignore the Fed’s two main policy mandates, which are increasingly incompatible with the current Democrat strategy. Exactly what do they think will be the impact of unrestricted immigration with a high minimum wage, increased taxes, including higher healthcare costs and prescription prices on prices and wage inflation. Combine this with an expensive attack on fossil fuels and industry and you’re combining falling productivity with increased overheads. For those that can remember the 1970’s and the inflationary spiral that such a strategy delivered, this is terrifying. The QE policies conducted since 2009 have already demonstrated themselves to have been utterly destructive to stimulating economic growth and that was notwithstanding the artificial suppression of inflation and interest rates. Not we are faced with unrestrained fiscal relaxation and probably in the most unproductive and politically motivated areas, but these are following probably the most irresponsible monetary expansion policies in modern history. Now without even the pretence of ever buying back in the QE debt, it will be revealed for what it always really was, a currency debasement. Rising valuations of alternative assets therefore should sound an alarm that we may be approaching a currency crisis, but it will be the bond market that will ultimately constrain the Fed. Here, the bond yield gap between the inflation protected TIPS versus the fixed rate treasury bonds effectively discloses the inflation being priced into the Treasury bond market. The Democrats might want to spend and Yellen will be used to try and persuade the Fed to assist in monetary financing, but as the implied inflation on bonds rises above 2%, then the Fed is effectively constrained.  Instead, the administration will be forced to fund its plans from increased taxation, which while it might be able to force through Congress initially, this would inevitably lead to the party losing the House in 2022.

A final gasp in the last chance saloon! 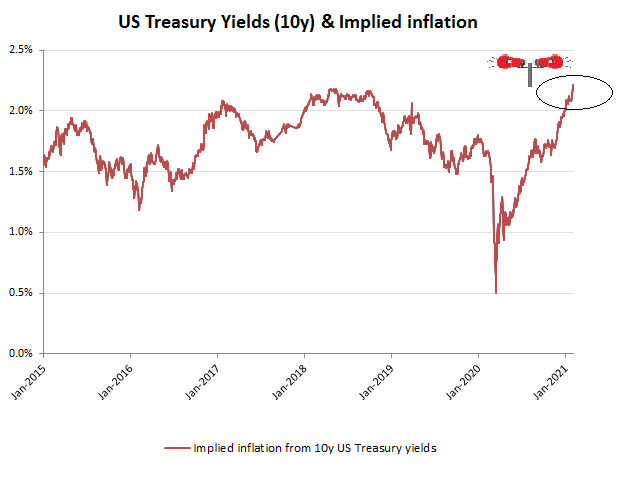 Any bullets left in the monetary gun?

Yes, I think everyone has appreciated the relationship between the spice and the worms, or monetary expansion and asset prices. The question going forwards is whether the expansion can continue and indeed may again reverse on rising inflation expectations and all this perhaps on a contraction in expected corporate profitability as the Government is forced to enact increasingly punitive tax increases, which would also negatively impact the real growth expectations and rating on stocks – welcome the 1970’s everyone! 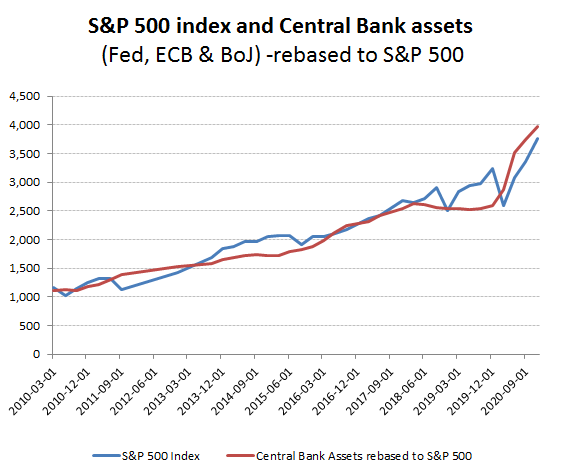 That “trickle down” feeling

Monetary expansion ahead of productivity to fund/hide structural deficit spending is just a long winded way of saying currency debasement as done by Weimar Germany once the pretence f ever paying it back is removed. The Fed either defends the USD and holds implied inflation to below +2% by restricting monetary expansion and possibly returning to QT, or risk a hyper-inflationary spiral which as we saw in the 1970’s and early 1980’s can quickly get out of control and is not someone one should play around with.  As a hedge against this the rise in Gold price ought to be noted.

First it was Gold

At least Gold and Silver can be turned into ornaments and have a few millennia as store of value and medium of exchange, but a cryptocurrency that lacks fungibility or any intrinsic value? Well clearly fiat currencies are now so poorly trusted, that many investors would rather invest in a digital pyramid scheme.  If there are two major red flags for where current Modern Market Theory (MMT) is leading us to, it is the spike in treasury bond implied inflation and the surge in prices of alternative instruments as a perceived safe haven from fiat currencies, with Bitcoin perhaps being the most shocking example. 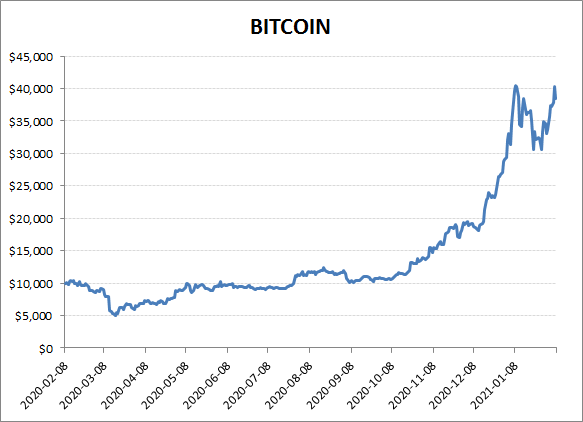 And now Bitcoin – not much use when they shut the internet!