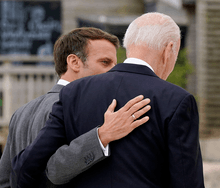 So what’s up with the Gold price, which has tumbled by approx -5% in less than 48 hours?  While 10 year US treasury yields are barely changed, a falling gold price on a rising US dollar suggests the Fed may be forced kicking and screaming back onto a monetary tightening tack and this also seems to have been the interpretation of the proverbial tea leaves following Wednesday’s FOMC meeting.  This might therefore also suggest that the current fall in the gold price is not a belated reaction, as reported by many, to Macron’s call at the G7 last week for the IMF to sell off part of its’s gold reserves to fund a $100bn African project. Macron, gold sales and the globalist cabal however, may still represent an additional dimension to this, which incorporates the ECB’s current €100bn per month debt monetisation and mutualisation ‘stimulus plan and perhaps is deserving of a little more investigation. 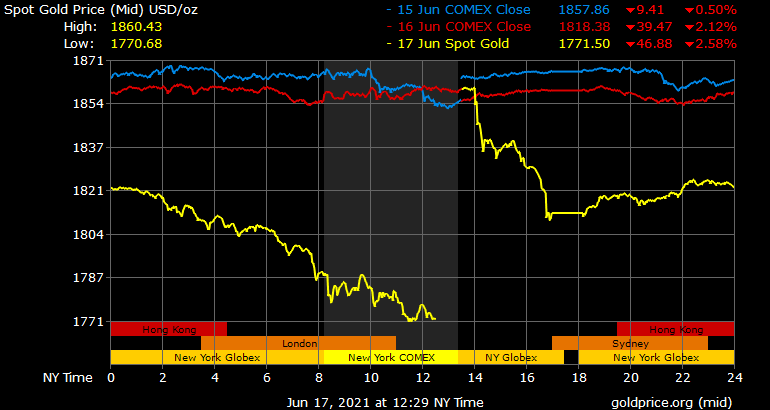 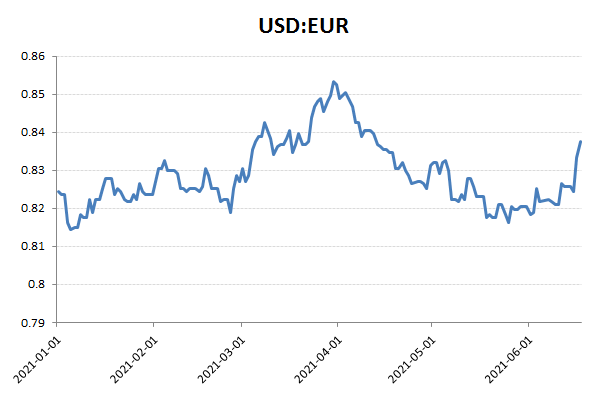 While the USD rises by approx +1.5% against the Euro

Another potential connected feature that may have gone unnoticed this week was on Wednesday, when the European Commission launched legal action against Germany’s constitutional court after its judges had previously cast doubt (in 2020) on the ECB’s debt mutualisation programme, which it ruled to  be “ultra vires”, but which the CJEU had already approved. Although the issue had been temporarily defused by Germany’s acceptance that the 2.4 trillion euro ($2.9 trillion) Public Sector Purchase Programme (PSPP) was deemed “appropriate” (notwithstanding it being clearly in clear breach of the Lisbon Treaty), this ‘lese majeste‘ against the CJEU’s absolute authority to interpret all EU treaties needed to be punished. The way would then be clear therefore for the EU commission to force the very transfer union onto German tax payers that they have been repeatedly promised by Merkel would never happen. ‘Tant pis’, as Macron might say, but once you’ve conceded absolute authority to a political court with a mandate to secure “ever closer union”, then they ought to have expected the subsequent use of ‘lawfare’ to strip the last vestiges of self determination away from them. As a tangential aside, perhaps Boris Johnson ought to have given this more thought before he signed the Withdrawal Agreement and committed to the NI protocol, which has now given the EU commission a stick it was always going to use to beat the UK with! Concede a legal authority to Brussels and you are consigning yourself to their agenda and diktats.

While this would seem to leave  the ECB unrestrained in its continued ability to monetise the deteriorating deficits around the EU and fund its multi-trillion Euro slush funds, it is still bound by the realities of currency markets. These include the gravitational pull towards returns and also away from risk. At the moment, Biden’s own fiscal plans to turn the US into a socialist and green utopia suggests the US dollar hardly fulfils the criteria of being a safe haven. Don’t forget what is unfolding in Arizona however.  A month ago we were assured that Covid-19 naturally originated from a Wuhan wet market rather than from a neighbouring bio-lab conducting gain for function research on a host of nasty pathogens, including of course on bat sourced corona viruses. Now, the lab-origins are the accepted.  Elsewhere, the establishment voice is that there was no election fraud in the 2020 elections and all dissent is ruthlessly suppressed.  Next month, who knows if this will remain the approved version of the truth.  If the Fed is already taking a tougher line on interest rates and presumably also on monetary easing, then either Biden’s fiscal plans on top of spiralling inflation will force substantial increases in both interest and tax rates, which will crater GDP growth expectations, or the plans are never going to happen.  Such a scenario might include an early return of Trump, which might also be consistent with a falling gold price and rising USD.  Heresy? Maybe, but then the consensus on many fronts recently is increasingly being proved wrong and who knows, perhaps much about the official narrative relating to the ‘pandemic’, ‘vaccines’ and lack of effective prophylactics and treatments may also be found to need revision.

So perhaps monsieur President Macron and creatures at the ECB may need some extra collateral beyond German taxpayers, to backstop the euro bond issuance and particularly if the US returns to sound financing, including a strong dollar policy that also permits a return to market pricing of capital. With Merkel heading for the exit, who is to say whether German push-back against the blatant EU power-grab actually gets some political will behind it. If so, then EU countries will need to underwrite their own bond issuance, which may get us back to the need to stump up, if not actually start selling some of their gold reserves.  Hopefully for Macron, he can avoid the fate of erstwhile UK PM, Gordon Brown when he attempted the same, but ended up depressing the price of gold into the market he was selling into and creating a price trough and that will forever be known as “Brown’s Bottom”.   What sobriquet would Macron earn for himself I wonder.