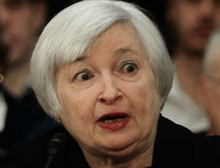 Another government statistic and another opportunity it seems to spin it to support a corrupt narrative. This time, it is the monthly US jobs data for September, where the headline jobs growth of ‘only’ 194,000 is touted as evidence of weak economic activity and ergo an argument for postponing any discussion of tapering by the Fed and no doubt for the endless expansion of the debt ceiling.  There are however, a number a flaws with this type of analysis, not least that it will be currency and bond markets, including inflation expectations that will be driving the politics of US monetary policy, while even a cursory glance at these jobs reports reveals a market still distorted by government policy around covid. Indeed scratch the surface and the underlying private sector jobs growth was a fairly solid +390,000 in September, while the year on year increase in average hourly earnings approaching +5% (and almost +8% annualised) suggests alarming inflationary pressure are building in the jobs market and which suggest a completely different policy direction than being promoted by the easing shills in MSM.

When looking at this September job report, the first thing to remember is the ongoing distortions from the various federal and state government mandates and financial supports relating to covid, many of which are currently in the process of being unwound or subject to judicial review as in the case of attempts to introduce medical mandates.  With regards to these, October and November are going to prove to be even more volatile and suggests these figures will be no more representative of the underlying strength of the economy or inflationary pressures.

Where the distortions have hit September, this has been primarily in the reported ‘Government’ employment categories, which with indications of vaccination mandates kicking in from October have  already seen large numbers of qualified staff leave to labour force. Over the next couple of months we will no doubt see these mandates infect parts of the private sector, such as in Health, Travel and certain areas in retail and hospitality. These latter areas however, may prove temporary as I would expect successful pushback in the courts for these unconstitutional mandates. This may become painfully apparent once private enterprises realise that these Biden mandates so far only have the legal weight of a pres release, which therefore will place the onus and liabilities directly on the private sector employers who are trying to impose them. In addition, the growing hostility including labour disputes and strikes will make these unworkable, albeit this will still suggest a winter of discontent and some interesting statistical gymnastics by the the Bureau of Labor Statistics over the coming months to try and make some sense of all of this in next few series of data releases.

Strip out the distortions of the Government categories and September’s private sector net jobs growth was a solid +317,000, which was also fairly broadly based across both  manufacturing and service sectors. 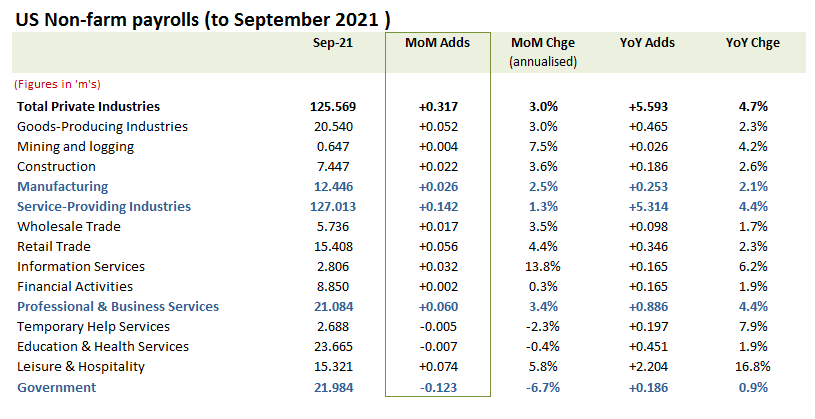 Then one needs to remember the usual fiddle of changing the seasonal adjustments, which this September cut 73,000 from the total. Without this, the MoM net increase in private sector jobs would have been +390,000 and only slightly shy of the +410,000 increase in August. 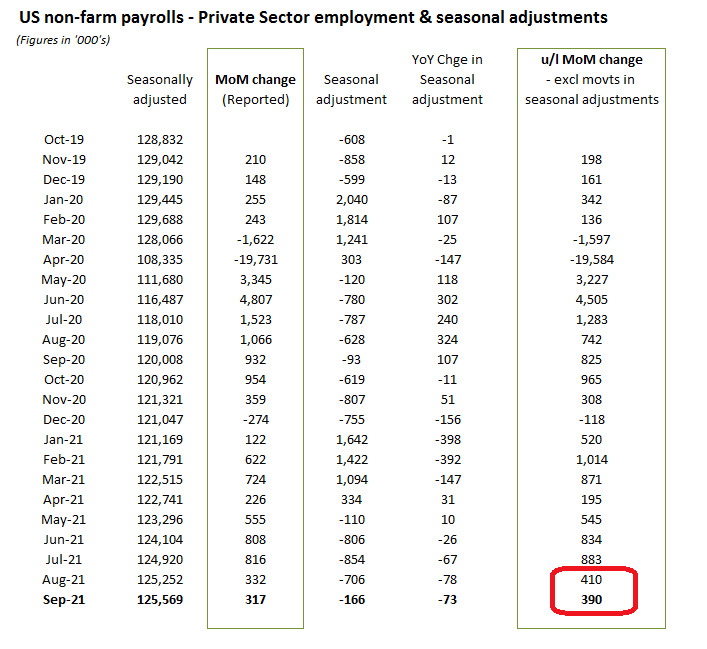 So after the gyrations surrounding covid and the panic response by many in government and some also in the private sector, one needs to take these monthly jobs numbers with a pinch of salt as we struggle to return to some sense of proportion to a disease with a 99.97% survivability, but unfortunately one that has been hijacked by certain political and commercial interests. After the bounce over the summer as lockdowns ended, but before the financial support on furloughs ended, the easing of the rate of MoM job growth into the early autumn should come as no surprise and also offers little support or justification to further monetary or fiscal support 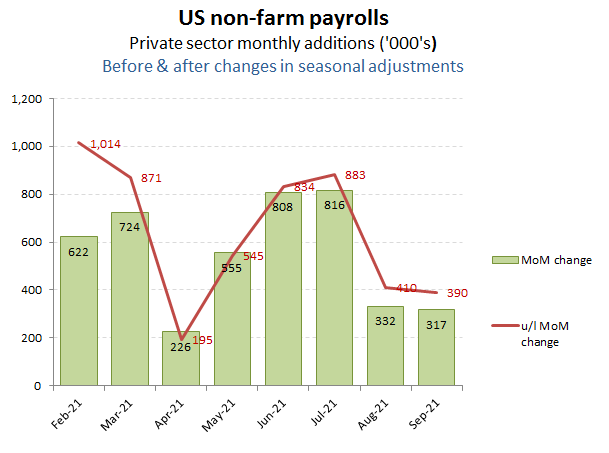 A collapsing jobs market? – NO!

So while MSM continue to bang the drum and spin each story to support the narrative for MOAR, what is happening in the real world? Yes the one that drives currency and bond markets and will ultimately determine whether further money printing and debt monetisation is even possible. Here, the important data points from last months US jobs report was therefore not just the buoyancy in private sector employment demand, but also whether this was sparking worrying evidence of inflationary pressures, and the answer to this is a resounding yes, with annualised hourly wage growth approaching +8%!! 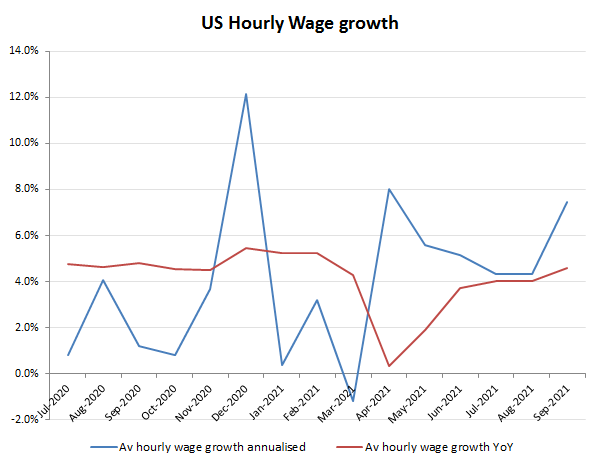 And yes, this has not gone unnoticed in bond markets, notwithstanding continued interventions by the Fed with is QE programme. Without a successful extension of the debt ceiling however, even this will drop away, which promises a spike in yields and implied inflation even here. So if markets are pinning their hopes that a weak September jobs report offers comfort for endless money printing and rising asset prices, perhaps it should think again. 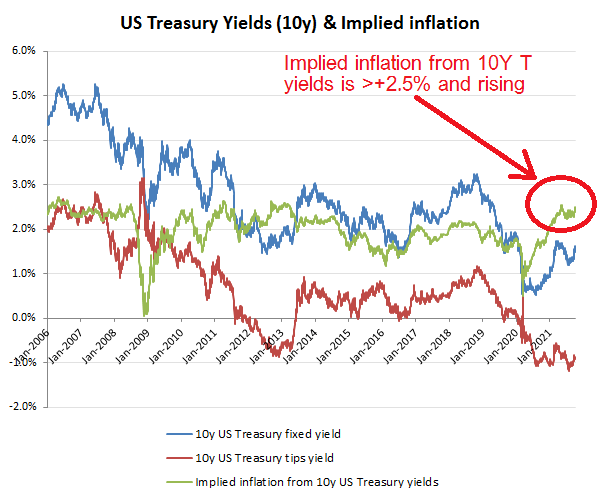