Is it a coincidence that Singapore, like Israel before it, is currently experiencing a surge in COVID deaths at almost exactly six months after the start of its vaccination programme?  Both countries were early adopters of a mass vaccination strategy to an approx 80% coverage, with Israel kicking off in earnest around the start of the year and with Singapore a couple of months behind. With infections and more worryingly, hospitalisations and  deaths being predominantly driven by the vaccinated, these new gene therapy treatments are failing to impart a broad and lasting immunity and particularly when compared to natural immunity. In geek-speak, these are what might term as “leaky” vaccines and as such one might have hoped that the medical establishment, media and Governments would have been more honest as to the implications, including that the emergence of resistant strains is an inevitable consequence pushing a leaky vaccine into the teeth of a pandemic.  But the key question now will be whether this emerging pandemic of the vaccinated exposes the deeper problem of impaired immunity caused by these gene therapies and ADE and what, if anything governments might do about it. Unfortunately, if this week’s scare stories predicting 60 thousand Flu deaths this winter in the UK is anything to go by, the Government here seems more interested in developing a cover story to camouflage the hole that it has dug for itself.  As a student of the Classics, one can only hope the current prime minister is alert to the irony of his earlier hubris in rushing the vaccination rollout in the UK!

Last month, rising infections, hospitalisations and deaths amongst the vaccinated in the World’s earliest vaccine adopter, Israel provided the first major evidence of vaccine failure for an entire region. While the media narrative has been focused on the waning antibodies from around 4-6 months after vaccination, this in itself is not unusual for a vaccine, but these ones also fail to trigger a T-Cell immune response on exposure to the virus. While this has been blamed on the highly specific targeting of the vaccine to its synthetic spike protein and the new Delta variant of the virus, this mutation represents only a tiny change in its genome of only 0.3% and this explanation is also not consistent with the rushed rollout of a third shot booster of similar dosage and mRNA constituents.  If the Delta variant was able to evade the first two shots, then the application of a third identical shot would surely prove as ineffective. Something else is clearly going on here, with the vaccinated in danger of being forced on a treadmill of artificial antibody stimulants every six months, with all the adverse implications on t-cells, neutralising antibodies and the stuff that clears up the crud naturally from ones body, including cancers. Oh, and let’s not forget the cumulative effect of all those additional micro-clots and ‘surprise’ increases in novel heart attacks and strokes, as we may already be seen from the recent report of a +25% increase in heart attacks in Scotland! 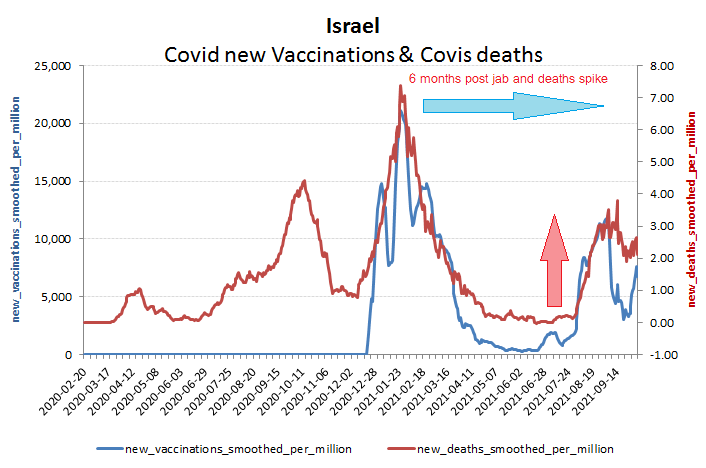 Waning immunity 6 months post vaccination and then the wheels fall off!

So now even those pushing the ‘vaccine’ have had to admit that the the vaxxed are vulnerable from COVID infection and disease from around 6 months from the Pfizer shot, as the initial antibody spike wanes. Presumably, the same will also apply to the higher dosage Moderna, albeit possibly a little later. The clock therefore is now ticking as other countries cycle towards their six month stage post vaccine rollout as to whether they experience similar surges in infections, hospitalisations and deaths, particularly amongst their now predominantly vaxxed populations. A couple of months behind Israel, but now also substantially vaxxed (approx 80% fully) is Singapore and the below chart plotting the massive surge in new covid deaths as we pass the 6 month start of the mass vaccination programme ought to speak for itself. 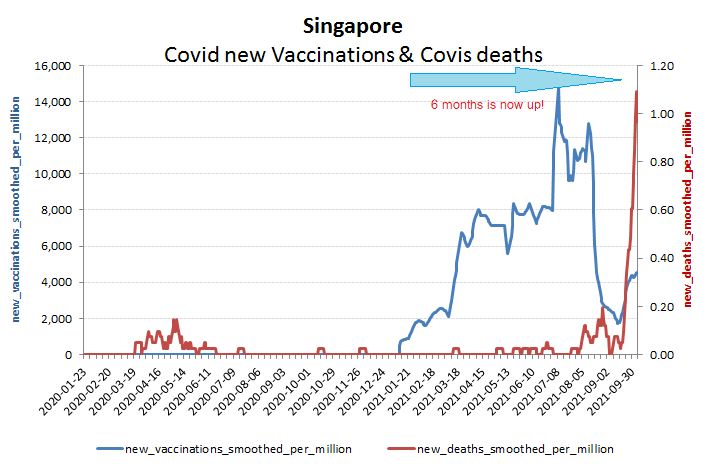 Cognitive dissonance from governments, or something more sinister!

Markets and Governments seem oblivious to what is unfolding. The danger point for ADE with a vaccine is well known to be after the initial antibody surge wanes (see Gert Vanden Bossche, Luc Montagnier, Robert Malone, etc and that all the previous coronavirus vaccine animal trials failed), which for Pfizer is around 4-6 months and possibly a little longer for the higher dosed Moderna. With substantially impaired neutralising antibodies following these shots (see Dr David Bauer, Crick Institute study of a 5/6th reduction), the exposure to the virus or similar, have been resulting in the expression of severe disease amongst the vaccinated, thereby raising a significant red flag for ADE. If so, then as other countries pass the six month period after the initial vaccine rollouts, then more of these dominoes may fall. So far, it has been in Israel, Iceland and now Singapore, but over the winter and the height of the flu season, this will extend to the UK and then a month or so later, the rest of Europe. As many of these countries have adopted a ‘dig a hole and hide in it’ response to this virus while actively denying access to life-saving early treatments (unless a member of Congress, an elite or resident of Uttar Pradesh), this has left most with a low level of natural immunity, which has now been further under-mined by these ‘vaccinations’. 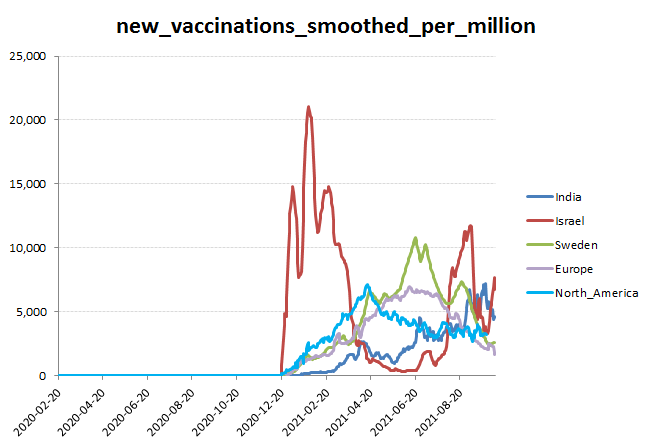 At present, governments are in denial, perhaps unwittingly in an extreme form of cognitive dissonance, but more likely something worse. The facts and their inevitable consequences however, are things that can be suppressed for only so long, as the inconsistencies of current policies become impossible to ignore for even the most gullible and frightened. Just consider how much of the official narrative has been completely debunked, notwithstanding the coordinated censoring by MSM and big Tech.  So let’s have  look at some of these whoppers:

When more people are dying of COVID today than this time last year, when there wasn’t a vaccine and there was aso a higher proportion of the more vulnerable groups around, then that starts to demand a coherent explanation from policy makers, particularly when most of the current victims are the already vaccinated. We are in a situation, that one RN observed hilariously

For any investor, these are particularly difficult times. Increasingly, the approved narratives that have been driving asset prices are being exposed as fraudulent. None of this of course is new to most market participants, albeit as per Solomon Asch’s conformity experiment conclusions, the group think can unravel rapidly as more dissenting participants are included. We should all know that one cannot borrow one’s way out of debt and soon we will also have to accept that we are not going to be able to vaccinate our way out of this pandemic. Indeed the current policy decisions being enforced merely seem to ensure its continuation. The dilemma for markets is trying to time the inflection point and possible catalyst that triggers the correction and recognition of what has been clear for years; that the emperor is without clothes.  For now, Herman Goering’s observation of the ease with which fear can be used to manipulate a population into complying with actions that are not in their interests are being shockingly validated. As in Goering’s day, society is being divided with the vilification of scapegoats to enforce compliance with a level of infringement on personal rights and liberties that many of our predecessors shed blood to protect. If there is a pandemic, it is not a virus with a 99.97% survivability, but a psychological disease akin to a form of mass Stockholm Syndrome and which will provide fertile grounds for future psychologists. Populations have been isolated and terrorised to the point of submission to almost anything which promises a return to normality, albeit every concession merely ratchets up the control. Indeed, any challenge to current policy, is usually met with hostility, even by its victims and often a refusal to countenance the data and science. As Mark Twain observed,  “It’s Easier to Fool People Than It Is to Convince Them That They Have Been Fooled.”

You can't handle the truth

This winter, may represent the turning point however. If fear of what has effectively been for most people an unseen and experienced threat has kept them in compliance, then how will that narrative survive a more tangible challenge that undermines the group-think. This winter, may well see an explosion of ADE of the vaccinated, together with the emergence of longer term, but no less deadly complications from these ‘vaccines’, including new and aggressive cancers, cardiovascular disease in the previously healthy along with accelerated neurological ailments. On current form, policy makers and their stakeholders will possibly try to again double down and blame everything else, such as the un-vaccinated, the flu or global warming and too much meat in our diets.  The reality on the ground however, is that more of us will know of friends and family with direct adverse effects of the cure rather than for the disease and this will become glaringly obvious over the forthcoming winter as Europe crashes through the 6 month vaccination anniversary and into either boosters or mass resistance and social unrest.

To steal a line from Frank Herbert, “The Sleeper must Awaken!”