Norway stands out as an apparent success story on managing the COVID pandemic. Assisted by its small population and inaccessible communities, the strategy of digging a hole and hiding in it until a vaccine is available appears to have been vindicated by the low rate of infections and mortality, notwithstanding it having also pursued a policy of denying patients access to early treatments. As a consequence and with over two-thirds of the population now fully vaccinated, the Norwegian government has led the way by removing all covid restrictions, including opening up entry to all travellers with proof of vaccination. What could possibly go wrong?

Unfortunately, quite a lot!

Firstly, by hiding in a hole means that there is very little previous exposure in the country to the virus and therefore minimal natural immunity in the community. In effect, Norway has put all of its public health eggs in its vaccine basket. If these vaccines were sterilising ones and also built up lasting t-cell immunity, then that would indeed have been an effective policy decision. However, these are ‘leaky’ vaccines (in that they fail to protect against the virus and can permit infection) while also offering very limited immunity to re-infection once the initial antibody surge starts to wane, which for the Pfizer vaccine is about after 6 months. Include into the equation the significant impairment to a person’s general neutralising antibodies (by approx 5/6ths according to Dr David Bauer of the Crick Institute) and killer t-cells and there is emerging evidence that as the initial antibody surge wanes, the vaccinated are proving to be more vulnerable to re-infection and particularly from new strains, than the unvaccinated.

While MSM and big tech are overtly trying to censor this news, evidence of not just that the vaccinated are at higher proportional risk of re-infection, but with higher viral loads are also at more risk of serious disease, hospitalisation and death. The Pharma commercial interests and authorities have tried to project the narrative of a pandemic of the unvaccinated, but evidence from high vaxxed regions (Israel, UK, Iceland etc) are suggesting the opposite and that it is the vaccinated that are also the new super-spreaders. The above clip of one of the many MSM apologists for vaccinations and medical apartheid, Dr Leana Wen clearly exposes the cognitive dissonance out there. While having to concede that it is the vaccinated that are getting re-infected and becoming the transmission conduit with higher viral loads, she still blames the unvaccinated. For the fully vaccinated Dr Wen, she concedes that she may present a risk to her unvaccinated children of infecting them with the virus, yet somehow twists the narrative by assuming she will have caught it from the unvaccinated, notwithstanding that the higher viral loads in the vaccinated will make them far more likely to be the super-spreaders in the first place!

So Norway has successfully hidden in its hole and now emerged into the world, but instead of a sterilising vaccine offering lasting immunity it has only leaky ones that offer only limited protection and possibly a counter-productive one as new strains mutate around the very specific synthetic spike antibodies engineered for the vaccines and then return to attack impaired immune systems, including possible ADE. Norway, like Sweden is about 4-6 months behind Israel in the rollout of its vaccinations, which suggests a waning of the initial antibody responses will just start to impact as we get into the winter and the normal flu season. 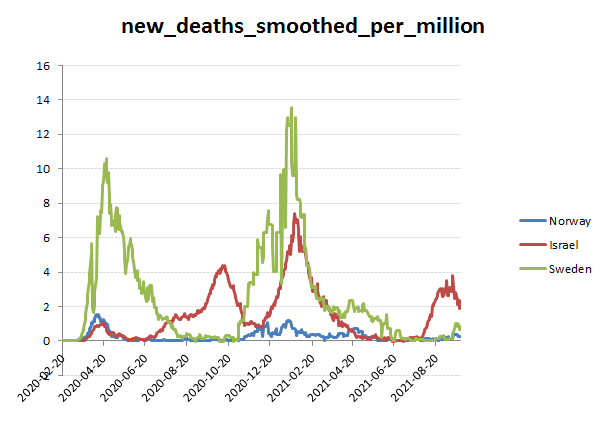 Norway – a success story, or just a function of hiding in a hole?

Norway is a bit of an enigma. It has a similar vaccination profile to Sweden, but a much lower rate of reported Covid mortality, albeit the rate has failed to decrease with the rollout of the vaccination programme.  Apart from the geographical isolation, small population (of 5.4m) and strict lockdowns there are few structural explanations for the lower mortality rates in Norway, as early treatments were also largely denied to patients. So unless the Norwegians have been more diligent in reporting mortality from covid rather than just with covid, then the lower mortality rates probably suggest the benefits of lower infection rates, but therefore also imply a lower base of natural immunity in the community and therefore vulnerability once they emerge back into the real world should the vaccines they have been relying on fail to stop infection or transmission.

The low rate of CV mortality looks impressive, assuming it has been reported on a comparable basis to other countries, but shows that digging a hole and hiding in it can offer temporary protection. In this, it is similar to isolated communities such as the Isle of Man or the Channel Islands. 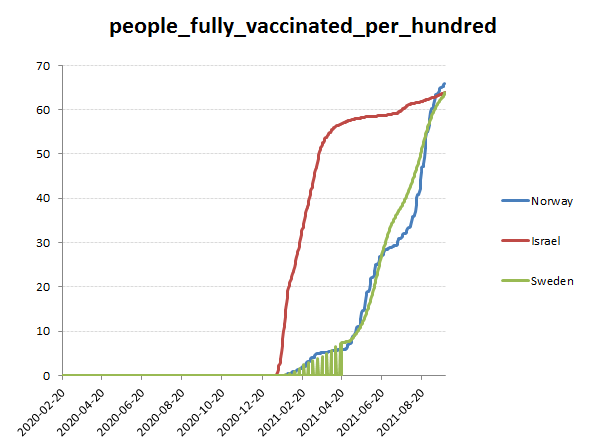 As can be seen from the below chart, Norway’s vaccination programme has been in lock-step with Sweden’s, with both only ramping up the pace since April and peaking by around June.  This therefore puts Norway about 4-6 months behind Israel. The vaccine distribution in Norway is split between Pfizer (as in Israel) and the higher dosage Moderna, which might suggest the impact of antibody waning could be slightly delayed from the approx 6 months we have been seeing in Israel. On that basis, the danger point for so-called ‘breakthrough’ infections, hospitalisations and deaths in Norway may coincide with the year end and the normal flu season. Over the next couple of months therefore we need to be alert to any signs of rising hospitalisations as a possible early warning that the current calm may just be preceding a storm! 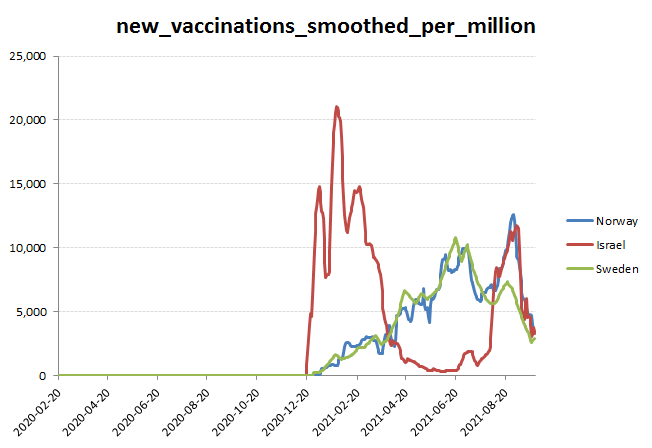