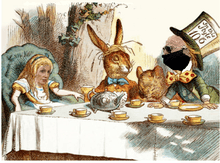 Oh it’s such fun to see the Fed being played, if not by the government, then by the banks! Now however, both interests are aligned in attempting to persuade Fed Chairman Powell to keep the monetary punch bowl well filled, or risk yet another market ‘hissy-fit’. Hence the management of expectations for an entirely unreasonable increase in monthly US job formation of around 1m for April, notwithstanding clear evidence from the statistically more reliable weekly unemployment insurance claims data that April would see a further significant slowdown.  Needless to say, the compliant media ran with the story to deliver the faux shock headlines when April’s private sector job growth came in at only +211k to hammer the USD, rally the Gold price and delight Biden and day traders with the apparent support this should give to allow the Fed to keep the funny money printing machine going. 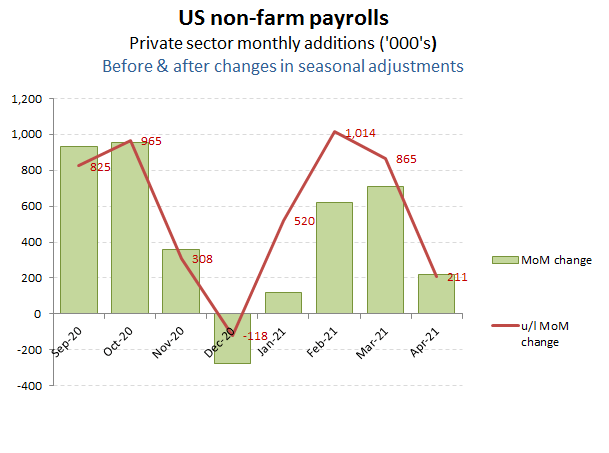 The initial return to work post lockdowns are now fading

It seems that it’s not just the occasional Democrat governor that likes an all expenses paid flight down to the Florida beaches, but with many of the normal requirements for unemployment payments relaxed for COVID, it has also proved difficult to persuade many workers to return to fill the vacancies.  It seems, not all employees were in a hurry to return to work whilst the government was prepared to pick up the tab and perhaps once states such as Florida start to require evidence that these recipients of government handouts and other taxpayers earnings are indeed still in the job market, that we may have to wait another month or more for the the next leg in the post Covid re-employment process.

So why the surprise that April’s job growth had continued to drop off?  The industrious returned to work as soon as permitted and particularly in ‘red’ states that eased lockdowns early, while ‘blue’ states and beach bums preferring some sort of universal income clearly will require a little more encouragement, such as having their free money removed. Unlike the guestimates of monthly employment issued by the BLS in the non-farm payroll numbers, the weekly insurance claims for unemployment represent hard data on actual claims and therefore must be regarded as a more reliable and immediate data point on the state of the labour market. Here, the data has been consistent with the trend in employment and which have also been clearly signalling the easing rate of post covid re-employment following the initial recoveries.  In February, continued claims dropped by -498k, against the NFP increase of 1,014k unadjusted (and +622k adjusted), while March’s NFP came in at +865k unadjusted (and +708k adjusted), which was again broadly consistent with a weekly insurance claims number that also reduced slightly to -440k.

So given the above relationship between unemployment insurance weekly claims and the monthly private sector employment numbers, what should geniuses at the big banks have been forecasting for the monthly employment growth for April when the unemployment weekly claims data had collapsed to only -27k?  Clearly those touting an increase to around 1m were either smoking something stronger than hopium, or were pushing a less honourable narrative such as creating a false expectation that was always going to missed, inorder to push for more unwarranted and frankly irresponsible debt monetisation. 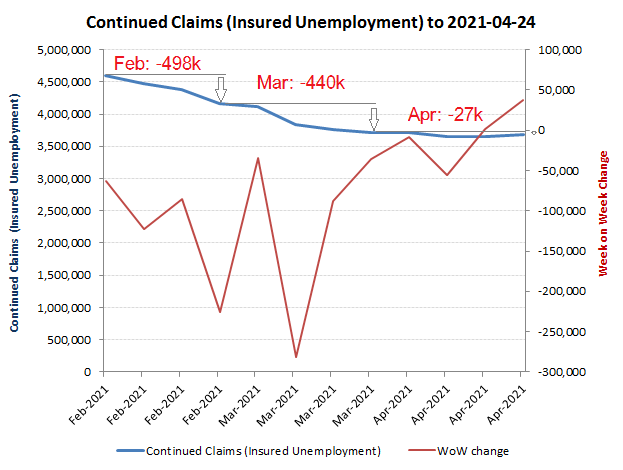 The ‘spice’ must flow

So why the financial establishment enthusiasm for monetary profligacy by the central bank?  Well, in case you’ve been residing under a rock for the past decade, financial markets have become addicted to the ‘Fed put’, where any correction is a buying opportunity ahead of the next injection of stimulus. Welcome to crony capitalism, where the cost of capital is determined by the fiat currency provider and government, rather than markets and where the moral hazard of chosen winners (‘too big or politically important to fail, or jail) has become the principal driver to markets. 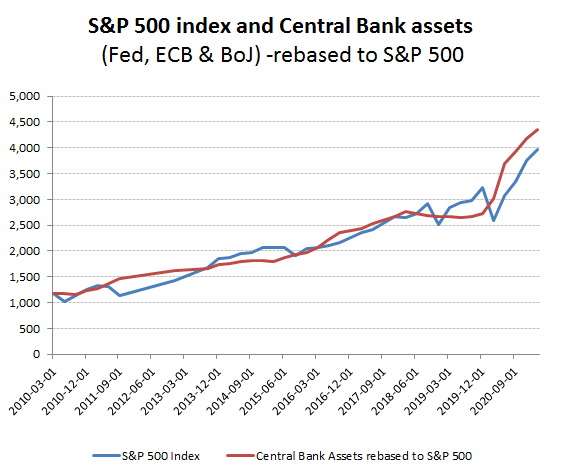 Printing money and lending it to your banking pals at negligible rates however helps to juice markets and encourage (asymmetric risk)  carry trades which in more normal circumstances and capital costs would be unprofitable. Of course, someone always has to pay, either via future bailouts/high taxation or currency debasement and higher inflation and interest rates/lower real growth.

So when a weak employment narrative is being fed out to markets, it suggests markets are being softened up for more debt monetisation by the central bank and therefore more money printing.  And lo and behold, the immediate reaction to the supposed US jobs ‘miss’, was the inevitable decline in USD and rise in inflation hedges such as Gold and equity prices. 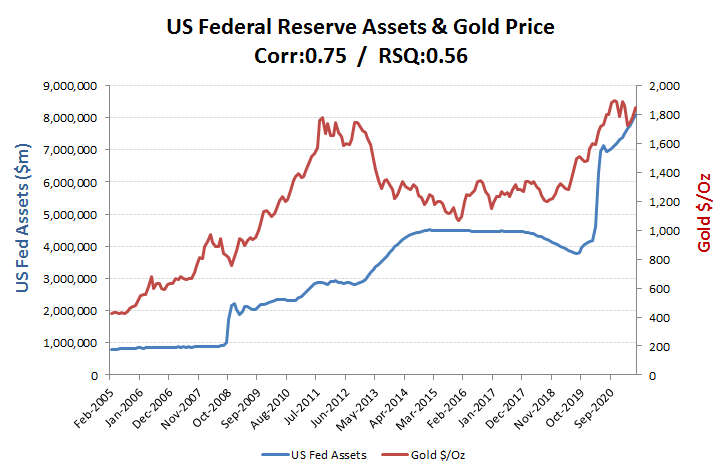 Normalcy bias can be a bitch. Rig a game for a decade, as the Fed and other central banks have been doing and its easy for markets to assume it will last forever. The Fed may seem all powerful in driving market pricing (as in “don’t fight the Fed”),  but this only lasts for as long as markets want to play in their casino and with their chips. Reserve currencies come and go thoughout history and the penalty for the easy lure of currency debasement can be extremely painful and very difficult to avoid once confidence starts to erode.  The assumption that somehow, the Fed can control interest rates only persists as long as it can persuade markets to buy its chips (USD). Should the currency weaken and inflation expectations rise, then lenders will require an additional premium on rates to compensate and more printing by the Fed will only exacerbate this into a spiral similar to the stagflation of the 1970’s.

While definitions can distort ‘official’ inflation rate numbers, a key yardstick is the inflation rate being priced into Treasury bond yields, a metric the Fed is forced to respect under its mandate.  Implied Treasury bond yield inflation, currency markets and gold prices are all saying the same thing; a cracking confidence in the current administrations policies and that trillions of dollars of value destructive so-called stimulus initiatives. Yes, the Fed can renege on its legal mandate to stabilise prices, but the end of this road ultimately is a currency crisis which will only compound the disaster. Rising implied bond inflation meanwhile is a precursor to rising nominal rates, often to a +50bps premium (ie to >3% on 10Y T-Bills), although how the Democrats square their ambitious expenditure plans with the lower GDP growth that would ensue from the higher interest rates, tax burden and energy costs is beyond me. 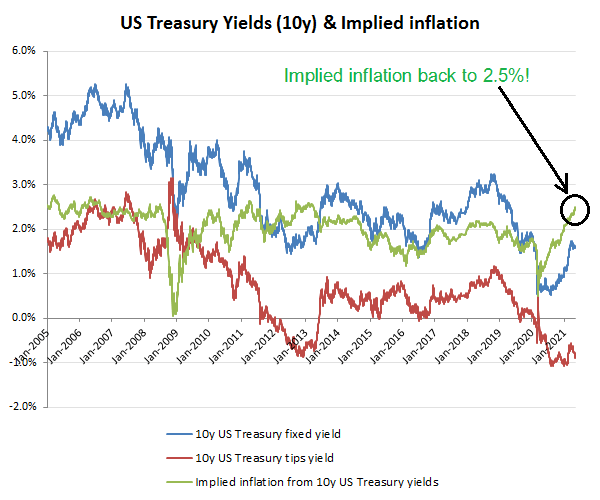