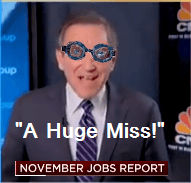 “A huge miss” was how CNBC’s Rick Santelli framed the November US jobs report, which revealed a ‘mere’ +235k net new private sector jobs were estimated by the BLS to have been added in November. Perhaps if Mr Santelli was to add back in the -175k decline in the seasonal adjustment that the BLS included behind these headline figures, he might appreciate that the true underlying private sector jobs increase in November would have been a less news-worthy +410k. But then that wouldn’t have helped the Q4E narrative, albeit the sub $1,800/Oz gold price and firm USD might suggest that financial markets are already on top of this one. 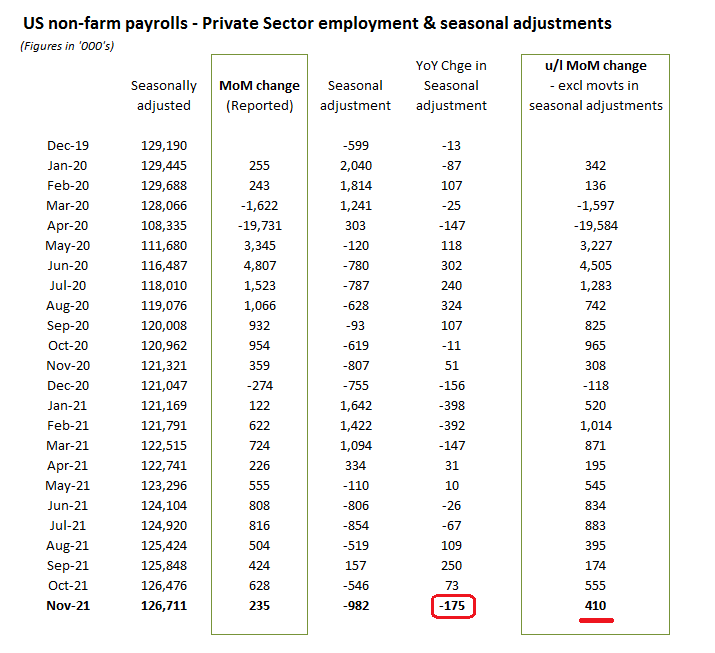 BLS up its old tricks again on seasonal adjustment changes!

It is surprising how much faith some people put in government statistics and particularly in this one, which seems to have co-opted many of the alphabet soup of TLA (three letter acronym) government agencies to its partisan bidding. For the BLS (Bureau of Labor Statistics), these monthly non-farm payroll (jobs) numbers are ESTIMATES, with those released on the first Friday of each month, for the prior month, representing merely INITIAL estimates at that. Not only are they usually subject to sometimes considerable revision, but also they include substantial seasonal ADJUSTMENTS, which can, and are often used to significantly skew the headline reported numbers that then get picked up by the news feeds and markets. As with a good press smear job, it is the initial report that is prominently displayed that is usually remembered, rather than the future revision that gets tucked away into the ‘weeds’.

As can be seen in the above table for private sector jobs, November’s negative seasonal adjustment increased by -175k, from -807k to -982k, which depressed what would have been a +410k MoM net jobs increase to the reported headline figure of +235k 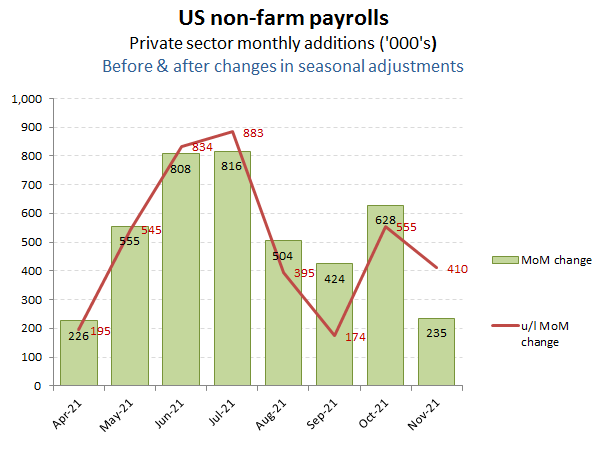 Not so scary now is it?

Split out the various industry sectors and it was mainly Retail and Mining & Logging that were struggling, while the remainder of the private sector seems relatively solid, which given the impending threats of vaccine mandates was actually not bad, as was the relatively modest increase in temporary help.  As for these mandates, it is encouraging to see the Federal ones increasingly being thrown out by both district and Federal courts as unconstitutional and if this trend is extended into the private sector (as we are seeing in some states such as Texas and Florida), this could both ease the potential downward pressure on job growth into the new year and indeed provide the platform for a considerable rebound.  Not however, the narrative wanted by those pushing for endless Federal Reserve monetary intervention 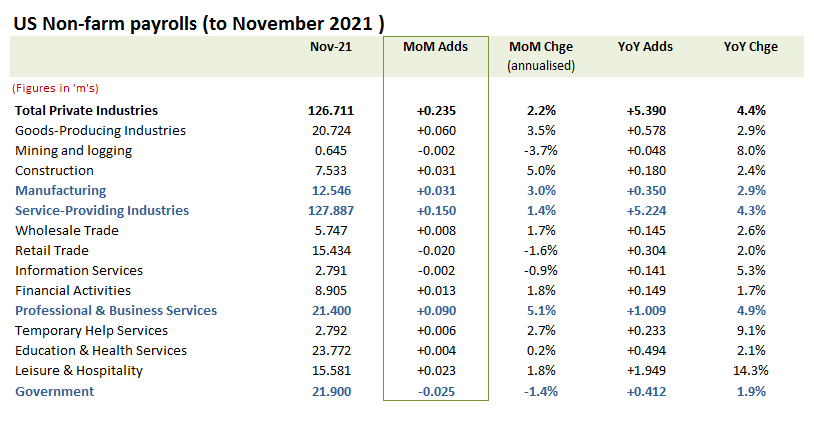 With the threatened vaccine mandates I am wary of reading too much into the data on average hourly wage growth, beyond recognising the rising inflationary trend, albeit these monthly changes can be somewhat lumpy. Although the annualised hourly wage growth dropped from over +4% (in October) to nearer +3% in November, the actual YoY has remained at around +5%. 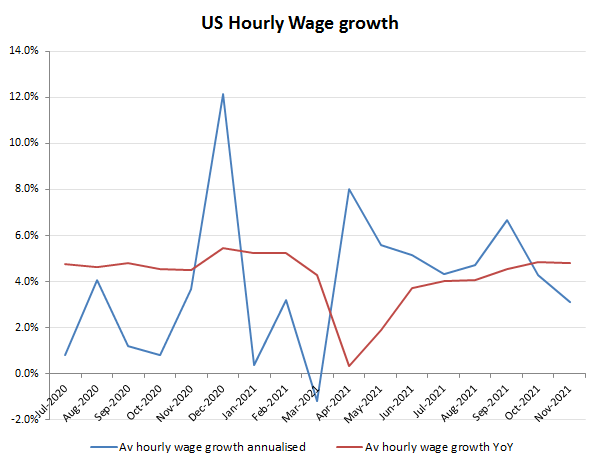 Mixed messages here, with some easing in inflationary signals

As ever, the bottom line here is how all this impacts Federal Reserve monetary easing, which has been supporting both government deficits and market asset inflation. A gold price that has again retreated back down from $1,800/Oz and a USD that remains surprisingly robust suggests that markets are giving the Fed the benefit of the doubt that for once, its utterances of financial probity and planned monetary tightening may actually translate into reality.  Whether the (very) slight reduction in balance sheet growth in November (to +$94.2bn) following a slightly larger than usual reversal in the final week is reflective of this, is something we may have to wait to see. But along with the rest of the market, have not doubt, we shall be watching this statistic very keenly given all the previous mis-directions from these central banks 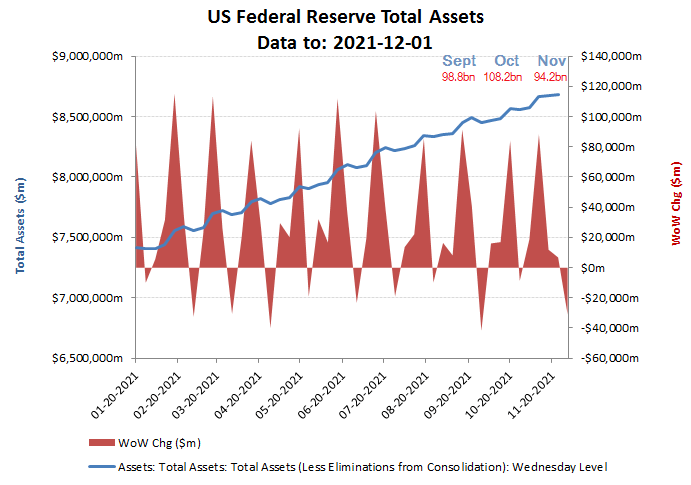 Fed starting to talk tough, but will it walk the walk? – watch this space!