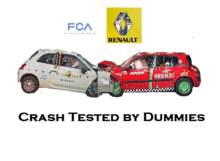 With the auto industry facing some existential challenges, one might have thought a low margin operator and its shareholders would have seized at the opportunity for a highly synergistic merger. Unfortunately, when one of those shareholders is the French Government, then the normal commercial rules don’t seem to apply. So after some foot-dragging by Macron and French union representatives, FCA has apparently walked away from a merger with Renault, that would have created the World’s third largest auto manufacturer and from a deal that it itself had initiated only a few weeks previously. Of course, this may just be tough negotiating tactics learnt from the Americans by FCA, but on top of the uncompromising approach Macron has demonstrated across an increasing number of issues, it doesn’t exactly showcase France as a particularly business friendly location within the brave new EU.

Perhaps Macron will be revealed as only having a small stick, but he is certainly making a lot of noise around the EU. with his hard-line approach on Brexit, a possible US-EU trade deal, the next EU Commission head to replace Junker and no doubt a similar battle soon over at the ECB. Without the Brits soon to offer some balance, it is perhaps hardly surprising that Merkel feels the need to stick around a little longer before the EU morphs entirely into a transfer union.

Germany and German auto manufacturers may take some schadenfreude over the apparent collapse of the FCA-Renault merger, particularly given the risk of punishing auto tariffs being imposed by the US from Macron’s insistence on including the Paris climate accord into any EU-US trade treaty – ie a non-starter. Since the French hardly sell any cars into the US, they of course aren’t the ones to suffer, but this certainly doesn’t apply to German auto suppliers, who are also at risk of being caught up by rising US-Mexico tariffs along with those between the US and China.

While French industrial support has at least sustained a car industry, when those in the UK were allowed to be dismembered and sold off, the heavy state and union interference has not produced a particularly healthy one. The strained relationship with Renault’s partner Nissan and trial of the ex-CEO is one symptom of this, as was the lack of engagement with Nissan over the FCA discussions; not particularly smart when you’re still reliant on Nissan IP in EVs.

No one currently has much idea as to how much the transition to EV’s will cost auto manufactures and the extent margins will have to be sacrificed, particularly should macro headwinds continue to impact demand and pricing power. In this context, being a low margin manufacturer (c. 5% for Renault) in high cost production sites, exposed to mature markets and product segments and with a weak technological start point in electrification, is perhaps not a safe place. Hence the compelling rational of the FCA merger which promised cost synergies that were equivalent to a doubling margins and therefore significantly closing the competitive gap with the likes of VW.

While much of these cost synergies would no doubt end up being re-invested back into product development (I was assuming two-thirds), the scale of these savings may well have made the difference between making a profit or facing extinction.

In this world it is nice to fantasise that companies act rationally and that commercial sense will prevail, although unfortunately I am often disabused of these illusions. Perhaps this will be yet another example, as FCA and Renault go their own ways. While an uncharitable description of the proposed merger would have been two drunks clutching onto each other for support, individually they may well each just end up in the gutter. As an eternal optimist, I am retaining in my valuation model an assumption of a 20% probability that the deal will be resurrected once Macron and the unions have had an opportunity to stare into the abyss.