The group delivered a better than expected top line performance from radio advertising and film releases, although more than offset by the associated sports content and production overhead needed to achieve this, with the YoY OpEx increase further distorted by the previous year’s inclusion of a sizeable film subsidy that was used to cover a weak release schedule.  Assisted by a favourable tailwind of a Q1 increase in Spanish TV and Radio advertising of +4.1% and +4.8% respectively, A3m’s Q1 revenues increased by +5.3%, with EBITA lagging this at +3.3% (after a +5.9% rise in OpEx), with margins contracting by -40bps from 17.4% to 17.0% in the period.  Notwithstanding the €12m QoQ increase in net debt to €161m, net financial charges dropped by over 40% from  -€1.9m to only -€0.8m (an implied annual rate of under 2% !), which managed to absorb the +146bps increase in tax rate (from 19.8% to 21.3%) and raise net income by +4.5%, from €27.2m to €28.4m.

The additional investment required to stabilise the Radio audiences is a salutary reminder that while market leadership can defend advertising share against a short term erosion in audience share (particularly in buoyant markets), this is not a sustainable longer term strategy.  For an investor, the high rates of marginal revenue drop-thru that can be achieved by squeezing programme investment into a rising advertising market needs to be balanced by the future cost of staunching the audience loss before yields are undermined.  For A3M in Q1, the strength of Spanish TV ad markets continue to cover up the cracks, but only just.  Behind the -40bps drop in TV Adv market share to 43.2% (-0.9% YoY) was a -80bps decline in audience share to 27.1% (-2.9% YoY). With a TV Adv market up over +4%, A3M was still able to keep its TV Adv revenue growth of +2.9% ahead of its OpEx inflation of +2.1% to raise its TV Op margins by +70bps (to 15.6%), but for how long? Consenus estimates would appear to suggest markets believe indefinitely, but history might suggest otherwise. 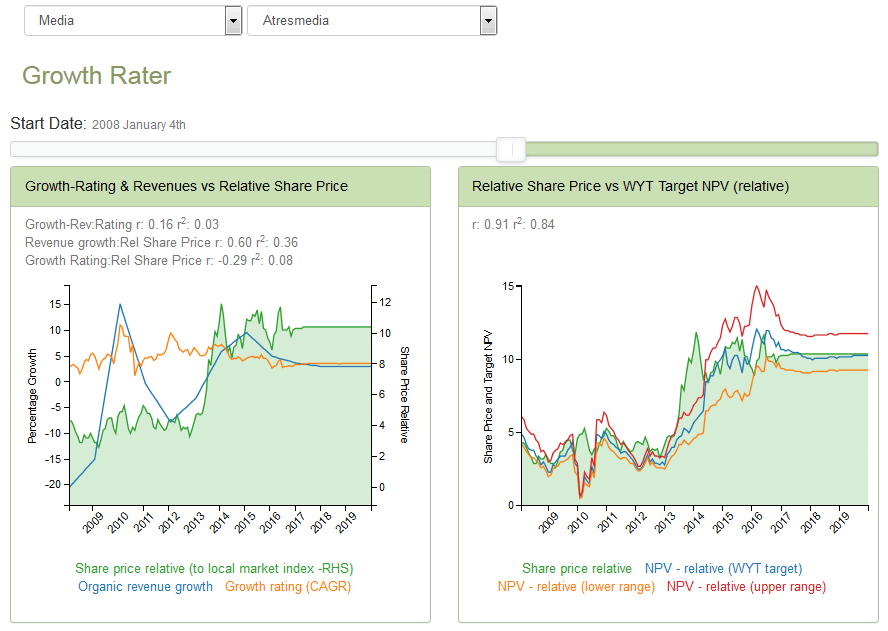 The headlines look impressive, but most of today’s impressive Q1 results release was already contained in their pre-close announcement on the 11th April. That included a strong rise in unit sales of +10%, driven primarily by Mercedes Benz cars (up +14%) which translated into a +11% YoY improvement in revenues, to €38.8bn.  Possibly believing its previously cautious expectation for global car markets this year, all this was done on a broadly unchanged staff number, this translated into a +25% improvement in adjusted EBITA (from €2.741bn to €3.433bn) and a +110bps rise in margins (from 7.8% to 8.9%) and reflecting marginal revenue drop-thru rate of 19%. Including a +€1.2bn swing in ‘exceptionals’ (from -€532m to €690m) and a -3.9ppts reduction in tax rate from 32.6% and 28.7%, the +25% advance in underlying operating profit translated into a catchy headline of a +100% increase in reported EPS, from €1.26 to €2.53.

Normally at this stage, Daimler would get all bashful a and pepper its full year outlook statement with several “modest’s”, to describe its expectations for unit sales and profits. Perhaps it was the prospect of a Macron win, but now the key adjective is “significant”, for both expected unit and also EBIT growth for FY17.  Hopefully all this bonhomie will continue to be sustained by cheap credit from central banks and these revised forecasts will prove more accurate than the last ones, although there remain a number of major macro hurdles ahead, not least of which being Brexit and possible tariff free access to one of Daimler’s larger markets, the UK. 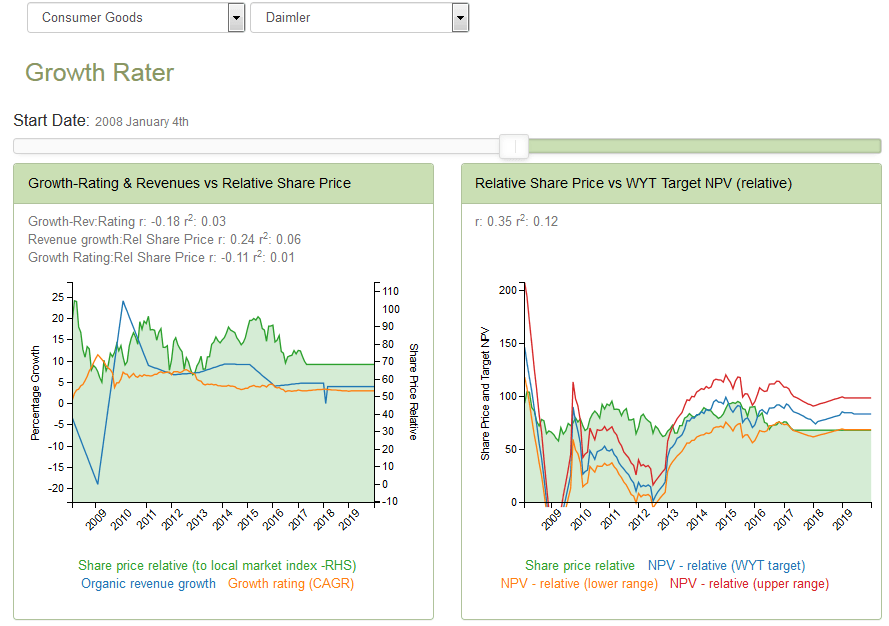 climbing a wall of worry?

By division, it was S&P ratings that provided the fireworks, leveraging off a +144% increase in high yield and +18% rise in overall US corporate bond issuance in the first quarter (source: https://www.sifma.org) to deliver a +29%/+$162m increase in organic revenues to $714m (+64% for transactional); 78% of which dropped-thru to operating profit which was up +50%/+$127m to $379m, with margins rising +740bps to 53.1%. Perhaps reflecting the volatility of bond issuance and uncertain rate environment, while the group has raised FY17 guidance, it hasn’t pushed the boat out with its revisions, suggesting further possible upgrades later in the year depending on events. 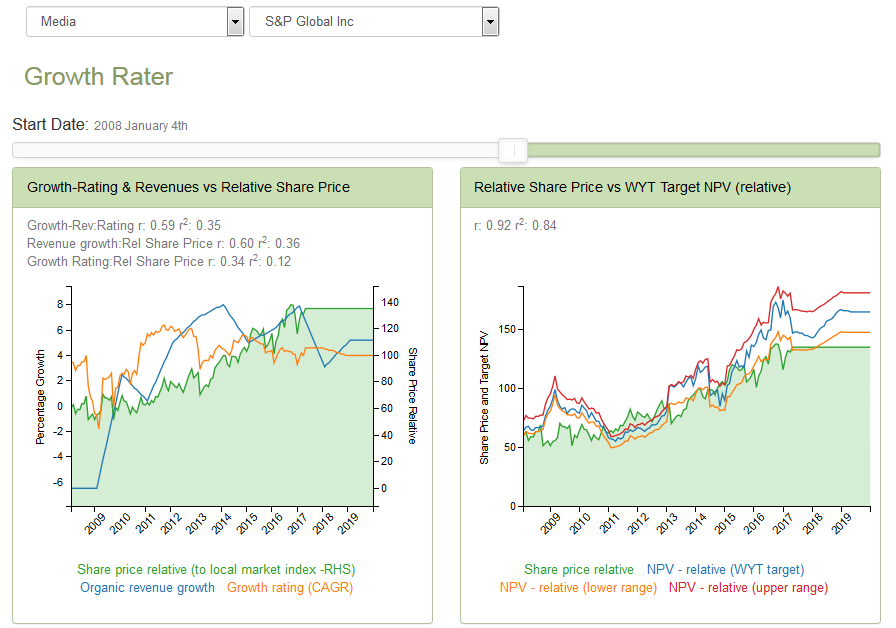 Kraft Heinz’s one day wonder offer on Unilever has re-energised the sector, at least for investors in not for actual trading performance. After Unilever’s +2.9% and Nestle’s +2.3% organic sales growth reported for Q1, P&G’s +1% reported for the same period (its Q3 FY17) was down in Kraft Heinz and Danone territory.  Notwithstanding having cycled against a prior year comparative that was a percentage point easier that in the previous quarter, P&G’s Q3 organic growth was -1ppts less that the +2% it reported in Q2, which in turn was -1ppts below that of Q1. Not that this was reflected in the adjusted EPS growth, where the exclusion of prior year discontinued activities, together with lower depreciation charges and tax rate enable the group to report an increase in EPS growth from Q22’s +9% to +15% for Q3. Include the conveniently excluded discontinued operations in the comparative however and the constant fx adjusted EPS advance for Q3 comes back to a rather less impressive +2.8% YoY!

The group probably wishes it hadn’t edged up its FY17 guidance of organic sales growth the previous quarter!

More, including valuation & analysis at: https://app.growthrater.com/ 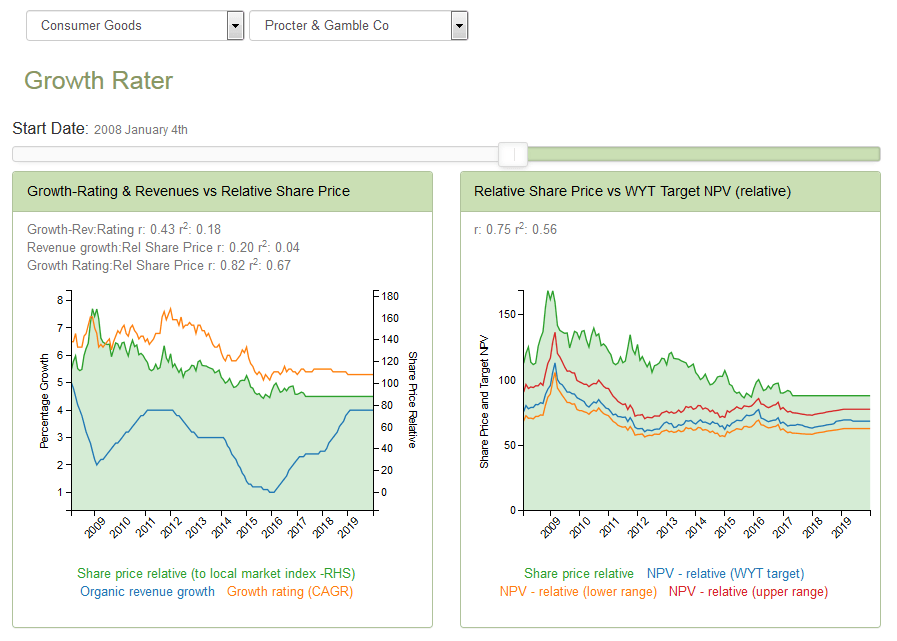