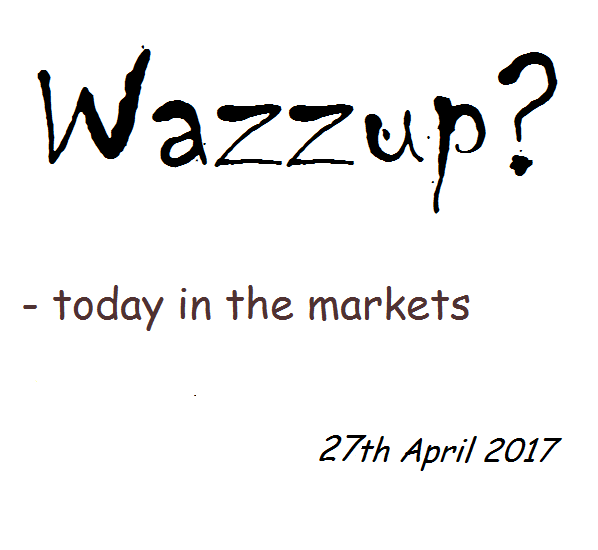 Televisa (tv) – Q1 FY17 results:  Happy to stand back and let the price come back to me

For those starting at the bottom of the P&L, the more than doubling of reported EPS from 0.21Ps to 0.47Ps may have looked okay, although stripping out the +1.6bn positive swing in fx derivative gains buried within the net financing charges and the EPS advance would have been more like a decline of -17%.  In part this is a reflection of slowing cable and TV subscription growth at Sky after a previous CapEx supported rise at a time of growing macro concerns over the potential impact of Trump’s wall. In part however it also reflects the persistent problems the group has been having in reorganising its TV airtime sales and pricing policies which have been depressing advertising revenues for about 18 months. While still trying to put a brave face on things by referring to their ‘disciplined’ pricing policy, the hard truth is with advertising migrating to cheaper channels, Televisa’s advertising decline of almost -8% suggests the strategy is still not working. Back in December I wrote:

“Given these uncertainties and negative forecast risk, my entry point drops to around $15 ps for the ADS and the lower end of my +4-6% CAGR target range.”

From what I see today, I see little reason to change that view. 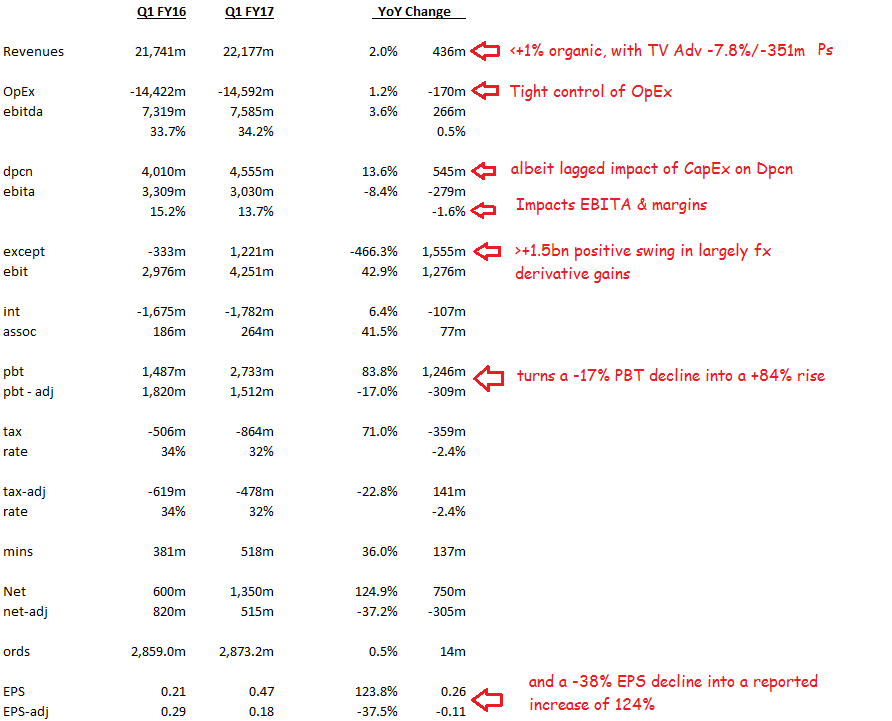 The full release can be found here: http://www.televisair.com/~/media/Files/T/Televisa-IR/documents/quarterly/2016/ENG%201Q17%20FINAL.pdf 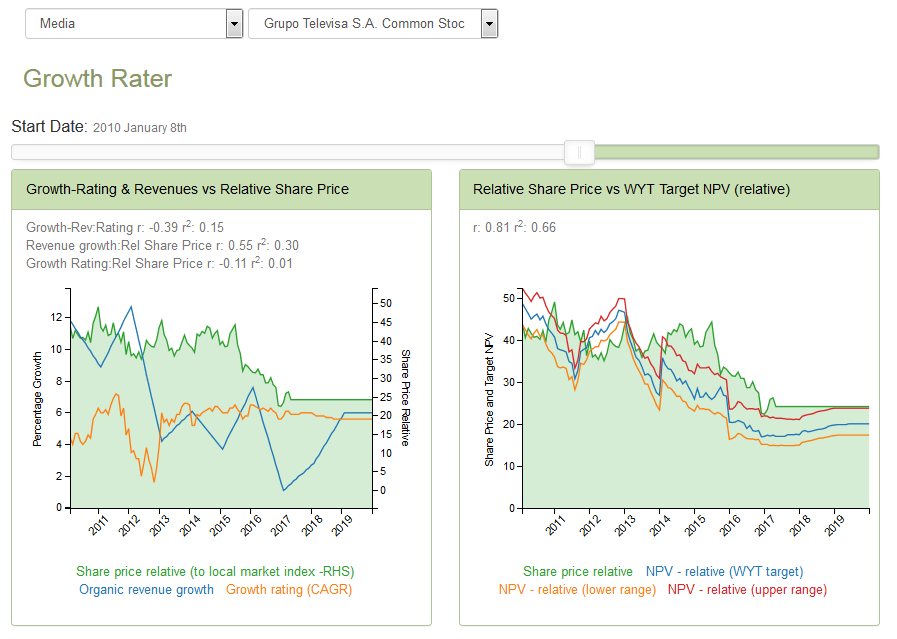 Q1 organic top line growth comes in slightly below expectations and well behind Omnicom and IPG. Net new business however was up +18% YoY to $2.1bn which helps to support the group’s expectations for a modest pickup in growth in H2 to raise the FY17 organic net sales growth average to +2%.

FY17 guidance is edged slightly lower on organic net sales from +3% to “about” +2%, while the adj EBITA margin target increase of  approx +30bps (at =fx) remains unchanged. 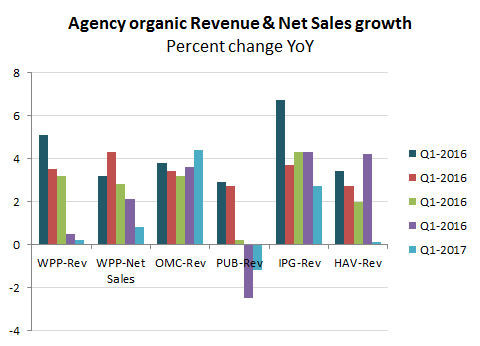 Valuation: Prospective OpFCF yield on this basis for FY17 comes in at 6.1%, which implies a GrowthRating of +3.2%, which is above the current organic net sales trajectory, but near the lower end of my longer term target range of +3-4%.  For me, the key issue is whether this represents a hiccup in growth which continues to edge up after the projected improvement in H2 and back up into a +3-4% range for 2018.  The factors that may determine these are: 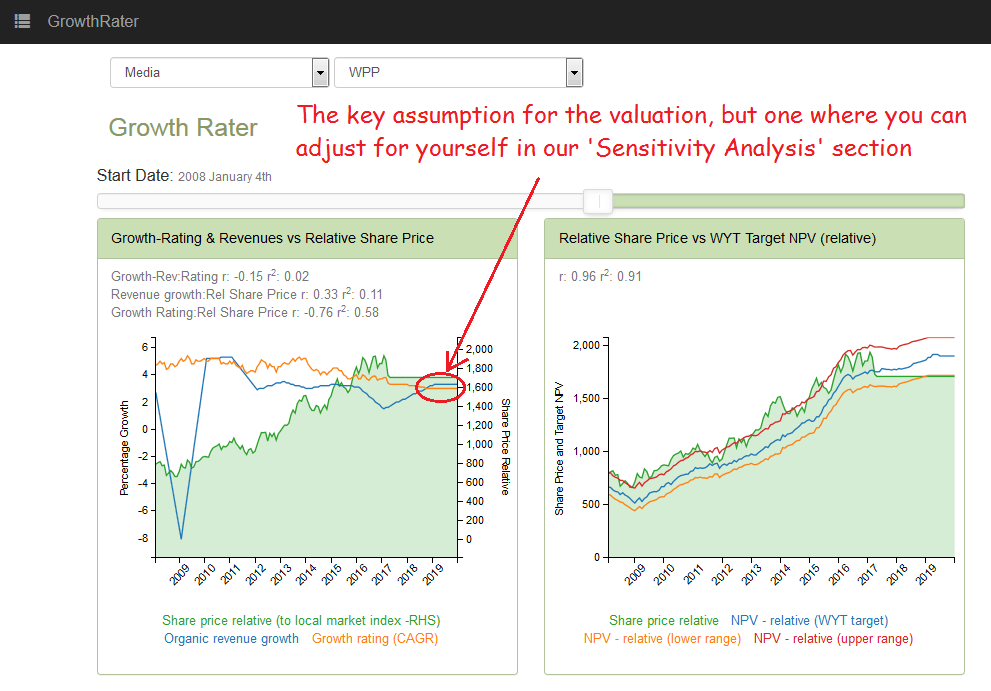 Markets are none the wiser as to the likely margin impact and duration of the current investment cycle, so are running with the continued strong top line performance and hoping that a >+20% pa organic sales growth can still be sustained on an early bottoming out of margins. At least that is what seems to be implied from the current valuation, with the shares edging above my target NPV which applies a mean reversion out to mid 2020 on a more than doubling of operating margins to 7% and on an average organic revenue growth of +20% pa, but is struggling to get me much above $900 ps. This is not to suggest that the group could not do better in time, but this would ignore the likely trade-off in terms of growth and importantly this is not something that has been tested by the Q1 results. Indeed, the implied acceleration in YoY margin contraction in Q2 to a range of -160-300bps (on the guidance range) from Q1’s -90bps, actually suggests the reverse, while offering no insight as to when and where the bottom of this investment margin and investment cycle may take the group. What is relevant for the share price therefore is not just where the theoretical margin opportunity may be for the group, which could comfortably be in double digits (albeit also something one might have envisioned a decade ago), but how confident markets will be in discounting this as margin erosion accelerates and the management avoid committing to a clear road map. 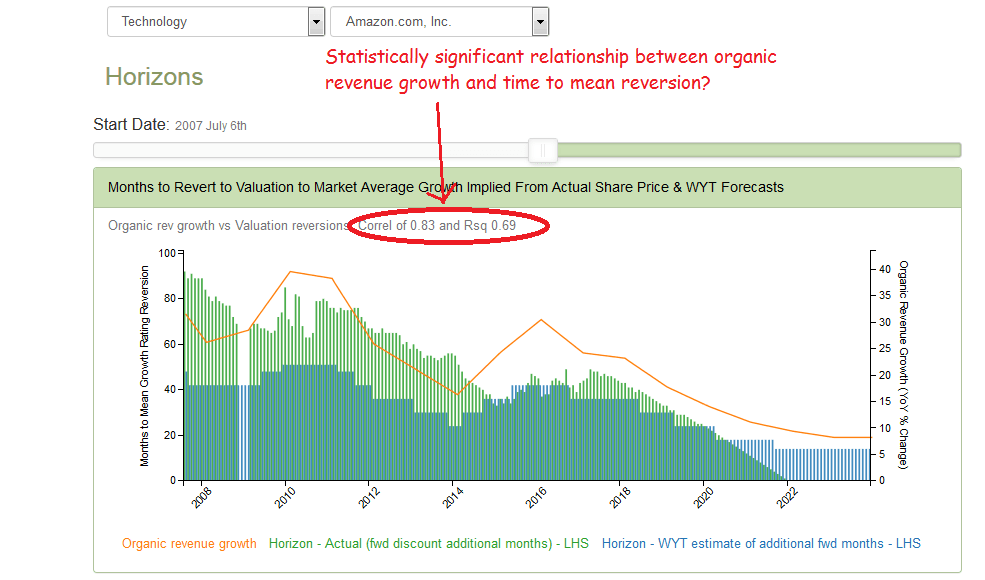 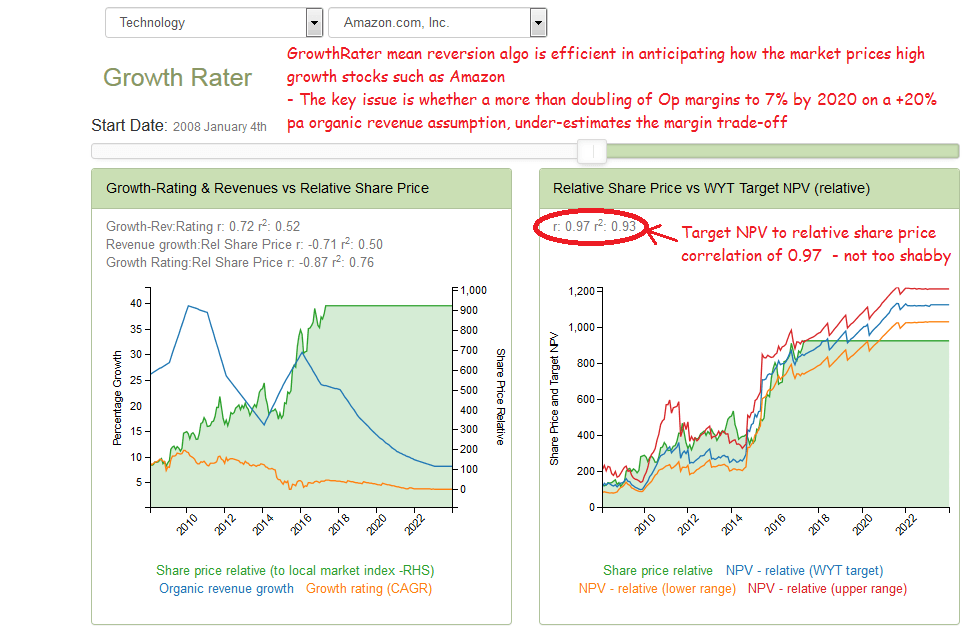