When you need to believe the ‘crazies’ are in control

Did anyone seriously believe that Trump would be able to get his ambitious stimulus plan through Congress if the economy was chugging along nicely as Yellen was continuing to portray? It was almost as implausible as expecting the EU to offer a painless Brexit for the UK while they remain convinced we were desperate to retain our current trading relationships. For each to secure their agenda entails a crisis point, which for Trump at least, never seems too far away.

While not always appreciated as an effective management tool by academics, Trump is a master of chaos. Even after only passing his first 10 days in office, Esquire’s Charles P. Pierce penned an amusing article predicting Trump “Will Continually Weaponize Chaos” , while  Steven Hansen followed this up on SeekingAlpha with an insightful short piece entitled “Chaos Theory Applied To Trump Presidency”, which are both well worth a read.

One can look at Trump in very much the same way as overall US foreign policy. One might take what appear to be tactical failures and dismiss those responsible as being stupid, which seems to be the popular approach. Alternatively, what if one assumes those capable of rising to the top of this greasy pole are actually quite bright and it is us who are the stupids in not properly appreciating the real strategy (of defending the US dollar reserve status) that underlies these apparent tactical failures?  Trump’s election goals were to increase real wages and push through an ambitious stimulus package as a means of securing this, but his challenge is inertia. As long as things are chugging along, there is no impetus for change, particularly for a Congress which can find a million excuses for doing nothing.  Back in mid-December and at the time of the first Fed rate increase I discussed this very theme in my post Cui Bono .

Fast forward a 100 days into his presidency and where are we now? Congress’s ‘do nothing brigade’ are blocking everything from healthcare reform to Trump’s ‘Big Wall’ and associated border taxes to pay for it. An extension to the debt cap was at least agreed, but this was clearly a legacy from Obama and only buys a few months grace until the Autumn. In the meantime the US economy is stalling, with  the BEA estimating Q1 GDP growth at only +0.7% (annualised) after a collapse in consumer expenditure to only +0.3%; something that has been clearly borne out in the Q1 results season across Auto, Packaged Goods and marketing Agencies. Also, if your attention was wandering, Trump is proposing a $5.5tn deficit bombshell from his still unfunded tax cut plans.  Lob a few missiles and bombs in the Middle East and wind up the North Koreans with a carrier fleet and his counter-parties are understandably confused whether he’s bluffing or not. But that of course it the whole point of this negotiation tactic, you’re not meant too, although I don’t expect markets be particularly appreciative of this. What it should do however, is knock on the head any real prospect of further Fed rate increases. If Yellen hasn’t got the message, Trump’s camp also appear to be floating replacement candidates for Yellen, no doubt to help her also agree some debt monetisation as she did for his predecessor, as he won’t want to pay higher rates if he has to borrow an additional $5.5tn! 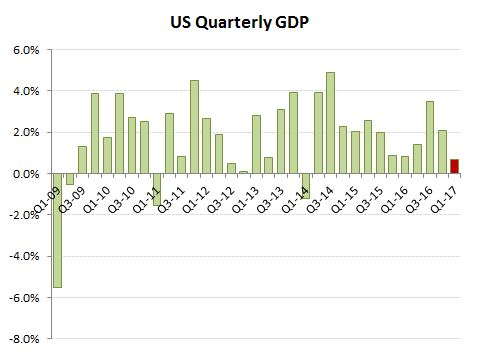 Not the best environment for a rate rise!

A Q1 BEA estimate for consumer expenditure growth at only +0.3% is amply borne out in the Q1 results, where domestic organic sales growth is down across packaged goods groups (eg P&G and Unilever), Auto (unit sales down -1.6% and sales for Ford lower and even Mercedes up only +2%) and also the bellwether marketing agencies, with lower organic US sales for WPP and Publicis and up only +1.1% even for Omnicom. Private sector income growth has been fairly steady at around +4% YoY (approx +2.5% per capita), which suggests increased savings rates are driving this. If Yellen wanted to deter borrowing led consumption with her rate rise and more importantly her narrative of more to come, then the strategy is working. 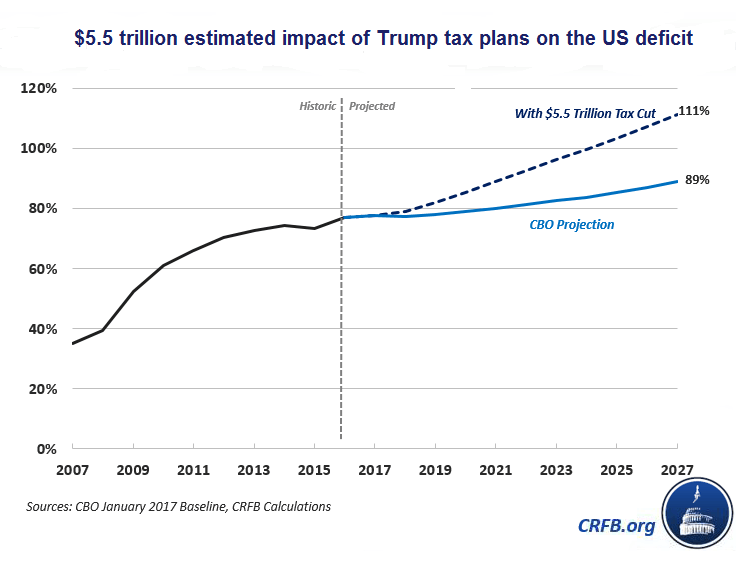 Now that’s what I call Chutzpah

Back on this side of the pond we’re finally coming to the end of what I described back in October as the “Sitzkrieg”.  With what is assumed to be a ‘shoe-in’ for EU candidate Macron in next weeks run off to the French Presidency, the EU has been emboldened to harden its position towards the forthcoming Brexit negotiations, receiving rapturous applause with their “We are ready, we are together”.  From their initial negotiating position, the EU premise would seem be that the UK will have to agree on its terms if it wishes to retain access to EU market. That includes a €50bn divorce bill to be paid even prior to the main negotiations, which one can be assured will be drawn out and quite possibly blocked by the EU commission sneaking in a Spanish veto on Gibralter. In the meantime, UK industry and business will be kept in a destructive limbo. What seems clear is that as long as these negotiations are conducted by those in Europe with a EU federal political agenda rather than the economic interests of their voters, no acceptable agreement will be forthcoming and that the UK is inevitably heading for a hard Brexit, and the sooner this is appreciated the better as it will allow the UK to get on establish its own bilateral agreements elsewhere. If French and Spanish fisherman or German autoworkers subsequently knock some sense in their ‘representatives’ at some point in the future, then fine, but for the present that would not seem to be forthcoming. To prepare for this is I believe the key reason for the snap election in the UK and if the Tories are returned with a commanding majority, one should prepare for the consequences. Initially, this will further impact sterling and UK markets, but if European bourses feel smug, this would be forgetting that both sides usually lose out in a divorce and that they may ultimately have more to lose, not just in terms of trade, but the loss of perhaps their most vibrant economy.   As with Trump, you have to convince your opponent that you’re not bluffing and you really might just be that crazy.