Having traded out of the stock with a +19% relative gain in the run up to their FY17 results, I didn’t expect to get an opportunity so soon to step back into this one, but with the shares approaching 1,200p (closed 1,204p), that is what I am doing.

While there isn’t an immediate catalyst now the reporting season for the agencies is over and there remains the concern over the Ford account, the bad news seems to more that reflected in both the price and the implied GrowthRating on the already reduced earnings expectations. Yes, the slight decline in Q4 net new business (a stat other agencies no longer reveal!) and the -1.2% fall in January organic net sales (vs +1.2% in Jan 2016) suggests a Q1 nearer -2% rather than +2% being touted for 2018 by some rivals, albeit this is still within the margin of error I was discussing back before the results.

What the trading performance and rating of WPP tells me is that markets have little confidence in forward expectations for organic sales growth and will extrapolate the trajectory from the last tangent on the chart into the rating. From the below chart one can see this both in terms of the cyclical sensitivity, which markets misconstrue into perceived structural declines, as well as the longer term structural erosion in organic revenue growth; albeit the latter insulated from the relative share price performance by acquisitions and margin growth.

So here we are once again facing a dip in organic revenue growth and seeing this reflected in a de-rating of the stock to an implied GrowthRating of under +2%, on an already reduced forecast. Yes, there are myriad of structural issues, but most of these are not new and didn’t seem to worry markets until recently. As with previous reversals, the decline in organic revenues, that markets didn’t see coming, spooks the same people who were happily chasing the stocks up when they were discounting >+4% CAGR growth and are now selling it down below a +2% one. In the meantime, how many of the consumer goods companies that have been reporting have signalled increased marketing investment into 2018? 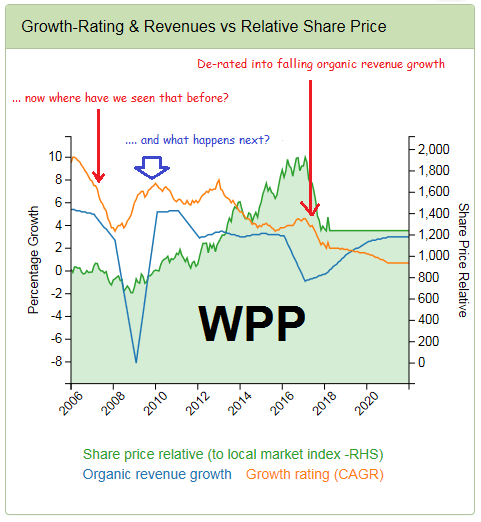 So what happens should organic revenue growth turn positive into Q2 as we cycle against last year’s -1.7% decline? Will the market remain stoically  short of the stock or pile back in as we saw back in 2009-2010?

If nothing else, it might enable the group to add value with its share buy-backs rather than just enhance EPS growth

Only GrowthRater gives you this insight